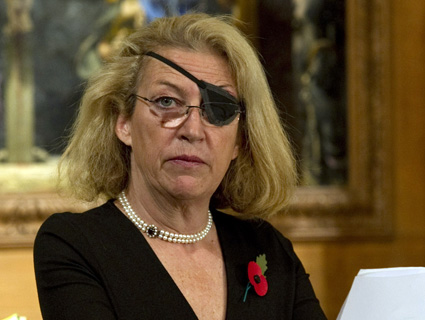 I met Marie Colvin in the Bar America in Kukes, Albania, in 1999. I’d just arrived on my first assignment in a real conflict zone, and I didn’t know a soul. The café was thick with journalists, spies, and soldiers of fortune, all planning cross-border raids with the Kosovo Liberation Army (KLA) into what was left of Yugoslavia. Between the heavy cigarette smoke and the whispered conversations, it was hard for me to tell who was which. Marie stood out unmistakably. Tall and blonde with a husky voice and an easy laugh, she seemed to know everybody. I’d only heard about her as the legendary writer for the Sunday Times of London who’d covered conflicts in Libya and Beirut while I was still a school kid.

When she found out I was a newbie, she sat down at my table and offered me a briefing. “Put your notebook away,” she said, urging me to be more discrete. “See those guys over there?” She indicated a burly threesome. “They’re working for Sky News, but they’re really mercenaries trying to get in and shoot somebody.” She laughed but raised her eyebrows to show she wasn’t kidding. I nodded and scribbled notes in my lap as she warned me about bandits on the road to Bajram Curri. She told me the names of KLA generals who might be trusted to keep their word and those who probably wouldn’t. She wanted to know: Had I been to the checkpoint where ethnic Albanian refugees were streaming across the border? What did I think? She wanted details.

We talked for half an hour over coffee. Why a veteran like her took time to talk to me was a mystery. Maybe it was her intense curiosity about people. Or maybe, realizing that I’d be writing dispatches about a story for which she cared deeply, she wanted to make sure I had the right attitude. All I know is I was grateful, and she quickly became a friend and a hero to me.

A few months later, after the fall of Pristina to NATO troops, I went to Istanbul to cover the devastating earthquake and then took a long vacation. Marie went to East Timor and then Chechnya, to write about the uprisings and brutal crackdowns. We met many times in the years to come, but there was no keeping up with her. It seemed that wherever people’s lives were being torn apart by armed conflict, Marie was in the middle of the action, pen on paper.

Many friends and colleagues have written about her bravery since her death this week in Syria alongside French photographer Remi Ochlik. Marie crossed front lines more often than most other journalists, and it’s true there was no writer with more guts. But Marie was not just a bang-bang reporter. “Being a war correspondent for me has never been, ‘Is that a T-52 tank or a T-72 tank?'” she said a few years ago. “It’s about people. It’s about what people are going through.”

She dropped to the ground and called out, “Journalist!” In response, the soldiers shot a grenade that punctured her chest with shrapnel and tore through her left eye.

Marie was the natural enemy of propagandists, but despite this she managed to charm some of the world’s most notorious dictators. Her guarded friendship with the late Libyan ruler Moammar Qaddafi led him to grant more interviews to her than to any other English-speaking writer. Time and again she came away from Libya with front-page material, as well as stories she didn’t want to print. Marie kept her friends rolling with laughter when she’d recount, for example, the time Qaddafi suggestively asked her to put on a pair of green slippers, because green was his favorite color, and she had to claim her feet were too big in order to escape his overtures.

Other strongmen wanted Marie dead. In the spring of 2001, she illegally crossed into Tamil territory in Sri Lanka and became the first foreign journalist in eight years to write about that conflict from the rebels’ point of view. When she tried to return to government-held land, soldiers fired on her with automatic weapons. She dropped to the ground and called out, “Journalist!” In response, the soldiers shot a grenade that punctured her chest with shrapnel and tore through her left eye.

“I felt a profound sadness that I was going to die,” she wrote for the Sunday Times after finally reaching a hospital. She was still rehabilitating late that year when Kabul fell. The newspaper and its readers missed her reportage from Afghanistan. I know because I tried in vain to fill her shoes as a stringer for the paper in her absence.

By 2003, after the invasion of Iraq, Marie was in Baghdad with her now-famous black eye patch, running circles around younger reporters. My friend Marijana Wotton was following women war correspondents for a documentary called Bearing Witness. Find Marie Colvin, I suggested, and keep your camera on her.

Marie stole the show, because she could make you laugh and break your heart at the same time. “I have to keep a bit of femininity,” she’d say, referring to the pink socks she wore beneath hiking boots crusted with the ashes of burned-out buildings. “Don’t I?”

The film includes a scene—so typical of Marie—in which she’s the first reporter to arrive at the excavation of a mass grave south of Baghdad. She tries to get details about the victims but is frustrated when a translator wants to impress upon her the number of body bags.

“I don’t want to say, ‘There are hundreds of people here’; I want to tell the stories of each person. These are not numbers, okay?” She turns to a man holding a plastic bag containing the bones of a family member. “What’s your name?” She asks where the victim lived, what he did for a living, and who loved him, searching for details that will reach the hearts of readers thousands of miles away.

Marie was eloquent and clear-eyed about the work we did, although the question of the effectiveness of her reporting gnawed at her. As she told a British audience a couple of years ago, “The real difficulty is having enough faith in humanity to believe that enough people, be they government, military, or the man on the street, will care when your file reaches the printed page, the website, or the TV screen.”

Marie never gave up that faith in humanity. “I probably do get too involved,” she admitted in Baghdad. “And I tend to have nightmares. But it still matters to me, and when it stops mattering to me, I’ll stop doing it.”

Marie could make you laugh and break your heart at the same time. “I have to keep a bit of femininity,” she’d say, referring to the pink socks she wore beneath hiking boots crusted with the ashes of burned-out buildings. “Don’t I?”

In 2005, I was with Marie in New York City after we got the terrible news that our friend, the young humanitarian worker Marla Ruzicka, had been killed by a car bomb near the Baghdad airport. The news hit Marie hard and brought back nightmares of the blast that had nearly taken her own life.

We organized a memorial in Brooklyn. Marla’s mom flew out from the West Coast, but otherwise the gathering was pretty much a reunion of New York-based war reporters and aid workers. Marie was uncharacteristically quiet that night as everybody got drunk and cried. Marla had touched a lot of us in her short career, traveling repeatedly to Iraq and Afghanistan and successfully lobbying US legislators to compensate victims of the Washington-led wars.

After most of us had made tributes to Marla, Marie finally stood up. The crowd quieted. Marie held a glass of vodka and an unlit cigarette in one hand and used her free hand to chop the air between her words.

“We should all do better,” she said simply, gazing around the room with her good eye. “None of us were as good as Marla.”

They were surprising words from a woman who’d risked her life for more than 20 years to expose the effects of war. But I knew what she meant. Marie yearned for a way to not only document atrocities but to undo them. Although she chose to bear witness as her profession, she would have loved nothing more than to put herself out of business.

As shown by the tributes to her since her death, Marie’s work provoked a response that went way beyond an appreciation for her bravery. Her last report from Syria was about watching a baby die from a shrapnel wound, broadcast on CNN hours before Marie was herself killed. Through Marie’s words, we saw an infant’s chest rise and fall, struggling to take a few last breaths, until it stopped. It brought the Syrian conflict home.

Marie dignified her readers with the pieces she wrote by always having faith that we would care. And she made those of us who worked beside her better and more thoughtful correspondents. Her death is a loss for us all.

Thank you, Marie. We will always miss you.