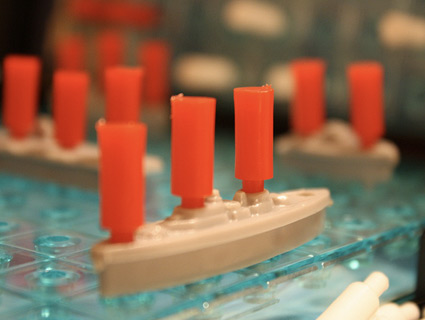 At first glance, Battleship seems like the most inexcusable, wretched pile of flabby urethra to crawl out of the movie industry in decades.

For starters, the film has been attracting a year-long volley of unfiltered rage for being such a blatant, self-satirizing model of product placement and cross promotion: The movie is openly advertised as an adaptation of the Milton Bradley board game of the same title. The board game. As in, the thing you and your childhood buddies played on the floor of your parents’ living room, in the days before you knew what paintball or a spliff was.

And unlike games like Clue or even Space Hulk, the sea-battle guessing game never bore any tangible plot. It was just you and your prepubescent cohorts shouting out combinations of letters and numbers. It’s not a toy that in any way begs to be whored out to Hollywood script-doctors eager to capitalize on nostalgia and commercial familiarity. As sage-wisdom doler Rob Delaney opined earlier this month, “It isn’t okay that there’s a movie ‘based on’ Battleship starring Rihanna. That is a thing that is not okay.”

Everything seemed to be teed up for king-sized failure—disposable escapism that amounted to little more than Battle: Los Angeles, but with 80% less dry land. Or Transformers, absent the irrepressible charms and sly wit of actress Megan Fox.

But here’s the dirty little secret about Battleship: It’s actually a ragingly dumb good time, that also happens to be the most enjoyably patriotic thing in theaters today.

Before we get into things like story and character, let me be clear about something: This movie is loud. Punishingly loud. Like, the-Greek-god-Poseidon-passing-a-kidney-stone levels of loud. The bulk of the movie is just things going boom through computer-generated images of seismic proportions. The set pieces are orchestrated with a visceral pulse, shameless flash, and surprising balletic timing that cudgel you into smiling like an idiot.

Downton Abbey, this is not. Satisfying brainless fun, it most definitely is.

It hard to remember that this movie has a plot, but I’ll try to recap it as best as I recall. Alex Hopper (Taylor Kitsch, of Friday Night Lights fame…and John Carter infamy) and Stone Hopper (Alexander Skarsgård, who plays a bad-boy vamp on True Blood) are sibling Navy hot shots. Alex wants to marry Samantha Shane (swimsuit model Brooklyn Decker), the daughter of the commander of the US Pacific Fleet (Liam M.F. Neeson, in a glorified cameo). Sadomasochistic pop sensation Rihanna shows up to play a weapons specialist named Cora Raikes, I’m pretty sure. (You see, they’re all in Hawaii for international naval war games.)

And for the primary narrative thrust, the film incorporates an element nowhere to be found in the board game: Warlike aliens—dickish martians who crashland off the coast of Hawaii. The space invaders come armed with gigantic space pods, spinny wheels of death, and superior firepower, and start killing tens of thousands of civilians for absolutely no reason at all. Think of them as the Manson Family of the galaxy.

Barack Obama goes on TV to tell everyone to calm down, but the human race nonetheless descends into a state of global panic. Naturally, it’s now exclusively up to the Navy bros to TCB.

It would be a marathon exercise to fully run down a list of what is wrong with Battleship. The dialogue sounds like it was written by bored teenagers, the acting is by and large wooden as a gooseberry tree, the movie has the depth of an episode of Secret Life, and it avoids meaningful character development like it’s a fatal disease. And your eyes will uncontrollably roll once you start noticing how hard the filmmakers tried to tie the film to the “source material” (the aliens’ intergalactic hellfire missiles launched at the naval ships kinda, maybe, sorta resemble the pegs used in the Hasbro game).

Fortunately, those flaws are outweighed by two factors: the explosions and America.

Director Peter Berg (a man renowned for guest-starring on cancelled HBO sitcoms and being a complete tool to Israeli journalists) stages the battle sequences with the manic energy and controlled chaos that he brought to summer action flick Hancock and the jet-black comedy Very Bad Things. One scene—edited to look like one single, long shot—fluidly chronicles the heroic last stand of a destroyer (the USS John Paul Jones) as it’s torn apart by the aforementioned spinny wheels of death.

Now let’s get back to the film’s deep love for America. [Warning: spoilers to follow]

As Battleship thunders to a climax, all hope seems lost. The aliens have bested mankind in the art of naval fisticuffs, and the fleet of destroyers has been wiped out. Luckily, Alex comes up with a genius back-up plan: The surviving officers and Rihanna break into the docked USS Missouri, a decommissioned battleship turned museum that hasn’t seen action since the 1940s. And who, you might ask, helps the crew command this giant vessel for which they have neither the skills or the know-how? Why, 90-year-old World War II veterans hanging out on the island, of course! “Just tell us what you need, son,” one of the T?j?-punching senior citizens says to Alex.

The rest of the movie consists of this squad of badass Medicare recipients coming out of the woodwork to kick the shit out of aliens and save the planet like it ain’t no thing. Their profound badassery is set to a soundtrack of aliens begging for mercy, and also the roaring sounds of AC/DC (courtesy of music supervisor and AC/DC buff Rick Rubin).

It should be noted that the film bears something of a multicultural message: In the middle of all the jingoistic alien-killing, there’s a stoic Japanese naval captain named Nagata (played by the hugely talented Tadanobu Asano), who fights alongside Alex, Rihanna, and the elderly vets to help America claim victory in the war against alien oppression. I’m not saying Battleship is some big-studio stealth effort designed to help heal the lingering wounds of 1940s domestic policy…but then again, I’m not not saying it, either.

So there you have it: The Battleship adaptation didn’t turn out to be a colossal waste of time, and it doubles as a love letter to the Greatest Generation. But let’s still keep our fingers crossed and hope to God that whatever box-office success this movie achieves doesn’t mean we’re all in for Michael Bay presents: The Settlers of Catan. Or Oliver Stone’s Monopoly. Or Uwe Boll‘s Cranium.

Battleship gets a wide release on Friday, May 18. The film is rated PG-13 for intense sequences of violence, action and destruction, and for language. Click here for local showtimes and tickets.