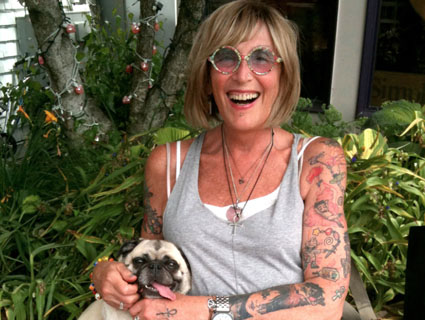 “I identify as neither male nor female…I’m neither straight nor gay,” wrote transgender performer and author Kate Bornstein in her seminal 1994 book, Gender Outlaw. Born in 1948 on the Jersey Shore to a loving mother and a dad who was “a macho, macho man,” Bornstein left theater school in Massachusetts at the age of 22 on a spiritual journey that culminated in a 12-year stint in the Church of Scientology’s Sea Org, an elite group of members who were based on ships and functioned like a religious order. Bornstein was excommunicated from the church in 1982 and branded a “subversive person.” In exile she’s found her voice as a liberated, post-op, transsexual lesbian icon—though, of course, Bornstein bucks labels like these every chance she gets.

What the lengthy title of Bornstein’s new memoir, A Queer and Pleasant Danger: The True Story of a Nice Jewish Boy Who Joins the Church of Scientology and Leaves Twelve Years Later to Become the Lovely Lady She Is Today (on sale May 1, 2012) doesn’t reveal is how scared she’s been to talk about her time in the church, until now. Thanks to the TV show South Park, which satirized Scientology for mainstream audiences, and the hope that this story might someday reach Bornstein’s daughter, who’s still a member of the church, she’s overcome her fear of retribution. Today, Bornstein says pretty much whatever she pleases about sex, gender, and Scientology—with fearless humor and a “fuck of a lot of love.”

Mother Jones: I’ve followed your work for years, but I didn’t realize you spent 12 years in the Church of Scientology. You were even on the Sea Org ship with L. Ron Hubbard! Have others been surprised, too?

Kate Bornstein: Yeah. There are Easter eggs in every book I’ve ever written. I think in the first one I called [Scientology] “Diabology,” but I was scared, so I didn’t tell many people what it really meant.

MJ: So you were on a spiritual journey in the 1970s and came across the Colorado chapter of Scientology. Why were you attracted to it?

KB: Growing up we were secular Jews, but what I got out of Judaism at that time in my life was questions. Everything was a question. “Dad, is there a heaven? Is there a hell?” You never could get an answer. That informed a lot of my reasons for getting into Scientology, because they had all the answers. They said I was not my body, not my mind. I don’t have a soul; I am an immortal soul. I’ve lived many lives and I’ll live endlessly into the future, and as an immortal soul I have no gender.

Now this is a big deal, because I never wanted to be a boy, and I didn’t want to grow up to be a man. 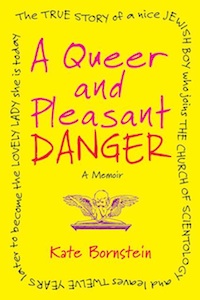 MJ: Do you think the desire to transcend gender is an attraction for other people in Scientology?

KB: I don’t know. You know, I know two other trans people who were in Scientology, and that’s not a question I’ve actually had a chance to talk to them about, but that’s a great question.

MJ: It’s my understanding that when you publish something critical of the Church of Scientology, they can come at you with a lot of legal force. You said you were scared to write about them before, what changed?

KB: I think it comes down to South Park. South Park blew the lid off of talking about Scientology. All they really did was tell the truth. Once that happened, more and more people started to talk about it. I finally got to the point where it was more important to me to reach out to my daughter than it was for me to protect myself from any divine retribution from the Church of Scientology. But I think in their estimation I’m too much of a freak to be believed anyway. [We contacted the Church of Scientology for comment, but did not receive a response.]

MJ: So writing and performing about being trans and about your sexuality has immunized you somehow?

KB: I sure hope so. They call apostates “suppressive persons,” and they believe one of my characteristics as a suppressive person is that I always lie with the aim of destroying humanity. I am like Dr. Evil personified, only a tranny, and everything I say to you could very well be a lie.

When you’re a Scientologist it’s like the movie Goodfellas, where the gangsters hang out with only other gangsters. We only hung out with each other, so we knew we were saving the world. There was no question. And we knew anyone who was in our way was suppressive and needed to be shattered. Those are their words: shattered.

KB: I was diagnosed with PTSD, and I had night terrors for about 15 to 20 years after I left. This is when you know you’re dreaming and you can’t wake up. Those stopped after I started writing this book. It got down to nightmares, and now they’re just bad dreams, so speaking about it has been helping.

MJ: When something is haunting you, does it help to write about it?

KB: Having experienced totalitarian rule for 12 years in Scientology, it was good to write. So, yeah, I’m a lot calmer about my trans stuff now.

MJ: In the book, you write that your superiors within the Scientology world had always been aware that you were struggling with your gender identity in some way.

KB: L. Ron Hubbard personally knew about that. He was personally in charge of making me feel better, I found out. They thought I could be cured.

MJ: And then did they use it to turn others against you after you left?

KB: That’s the big paradox. They don’t believe that thetans, immortal souls, have a gender, but they’re really homophobic and transphobic. If you’re a pervert like me, that’s a symptom of being a suppressive person. You must be a suppressive person, too.

MJ: Undoubtedly, I’m a suppressive person. Outside of Scientology, are queer people going mainstream? You wrote Gender Outlaw in 1994, and last month you were on MSNBC on the Melissa Harris-Perry show talking about transgender rights. How have things changed in the past 18 years?

KB: They have changed, but they haven’t quite mainstreamed yet. We’re at the point now where, finally, with that one-hour segment, trans people and the media hit a fucking milestone. It was mainstream coverage of trans issues that didn’t focus on the individual narrative. The “Oh, what was it like for you when you grew up?” story. I’m all for the individual narrative, but unless it’s really in service to the cessation of suffering, what the fuck use is it other than being a freak show? So people from the freak show got to an issue-based movement with that one hour of television.

Visit msnbc.com for breaking news, world news, and news about the economy

MJ: Right, because you were talking about experiences of trans people in prison, voting rights for trans people, and trans activism. Melissa Harris-Perry defined “cisgender” on TV!

KB: Is that awesome or what?!

MJ: One thing that struck me about your appearance on that show is that you spoke about gender as being more than just male and female. I feel a lot of people, even trans activists, don’t define gender that way, or don’t agree with that idea.

KB: It’s not a very popular thing. Not all trans people agree with this nonbinary thing. There are some who do and there are some who don’t. I don’t speak for all transsexuals or all transgender people. Certainly I honor anybody who wants to be a man and do the work of becoming a man. I honor anyone who mindfully becomes a woman. That’s cool. But, I really don’t get how there’s only two choices. There’s no two of anything else in the entire universe; why should there only be two genders? I don’t get it.

MJ: Yeah, you talk about the dozens and dozens of letters that could follow LGBT.

MJ: How is all this multiplicity and fluidity manifested in your life and work?

KB: I play with images of myself—every trans person does. When we were talking about the design of the book, I had images of different places in my journey from birth, to boy, to man, to baby dyke, to glam, and they wanted that on the spine of the book, and they wanted pictures in the book. I was like, “You know what? No.” That’s what every trans book has had—before and after pictures. Let’s not do that. It wasn’t just about, “I am a woman trapped in a man’s body.”

MJ: Maybe because your path was to something beyond the binary.

KB: Listen, the power of that narrative, the before, the agony, the masculinity, the during, and then the after—that’s what got me through the night. That’s all that was available when I was growing up. So I would read that over and over and over again. But this book is for my daughter, and my grandkids, and I wanted them to see more than that one facet of me. That’s what I wanted to get across. People’s voices can’t be silenced now. I’m a member of a Twitter “Twibe” of over 12,000 people (@KateBornstein). I’ve got almost as many Twitter followers as the Church of Scientology (@Scientology). Somebody made the point that the internet is Scientology’s Waterloo. They don’t know what to do about it. That gave me a lot of courage.