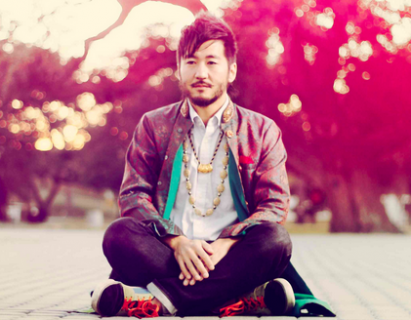 It’s hard to put into words what, exactly, Kaoru Ishibashi does on stage. He’s a solo violinist, sure. But he’s also a singer, beatboxer, composer, percussionist and sound effect machine—all at the same time. It’s tempting to compare Ishibashi—a.k.a. “Kishi Bashi”—to that other looper extraordinaire, Andrew Bird, but that’s not really accurate. Kishi Bashi is what would happen if Bird overdosed on Adderall, was left in the Sahari desert with nothing but a violin, and had to find his way home, naked.

In short: Where the hell did this guy come from?

Kishi Bashi isn’t one of those skinny jeans-wearing kids who breeze to the cover of Pitchfork when they’re 21. I first saw him years ago, back when he was part of Jupiter One, the kind of inoffensive Indie rock band Brooklyn churns out in droves. During a set at the Iota Club in Washington, DC, Kishi picked up his violin maybe a handful of times, but it was near impossible to hear over the drumkit. The band went on hiatus after failing to hit the big time, and Kishi went on to work with Regina Spektor and superstar weirdos Of Montreal. And the rest is history.

I spoke with Kishi at Austin City Limits music festival about his one-man show, why his album is not called “I Lost My Wrestling Match To Davey Pierce On The Big Black Bus,” and how he’ll write you a ukulele song if you send him $100.

Mother Jones: What made you decide to strike out on your own?

Kishi Bashi: I kind of got burned out being in a band from New York City, which is really incredibly difficult. After doing that for two years, I started touring with other artists. I worked on one of Of Montreal’s albums, doing string work and production and weird sounds for them, and that’s how I became friends with founder Kevin Barnes. I convinced him to let me join the band, then toured with them a year in a half.

MJ: How do you make such crazy sounds all by yourself?

KB: I have a delay pedal, and then I run through an octave pedal that creats a lower octave, or a  cello-like sound. And then I have a loop station, where I can do half-speed and double-speed loops. I’m slowly integrating other performers—at this show I have an awesome banjo player with me who’s a friend from the band Tall Tall Trees. But a lot of people like to see me do the show by myself, so I don’t think I’ll ever need, say, a full drum kit.

MJ: Wikipedia claims you’re putting out an EP this year called, “I Lost My Wrestling Match To Davey Pierce On The Big Black Bus.” Is that true?

KB: No. Kevin Barnes bombed my Wikipedia page. And I won, by the way. Anyways, I’m not doing an EP, but I am planning to release a series of acoustic songs I wrote as part of my Kickstarter campaign. I promised to write a 30-second song for everyone who gave me $100, and I have about 20 so far. They have ukuleles and stuff!

MJ: How much of your show is improvised on the spot?

KB: A lot of it is precomposed because it just takes a lot of practice. But I like to improvise, so I leave sections open. It’s about half and half. Every show people see of mine is going to be a little different by nature, because anything can happen with these pedals. Sometimes I forget to do something, or add something, and the beat just disappears. But that’s one thing I learned from Of Montreal—they’re totally committed to surprising their audience, and having these super provocative, wild shows that make the audience go: “What?” If you’re a performer and people are paying money to see you, you should at least surprise them.