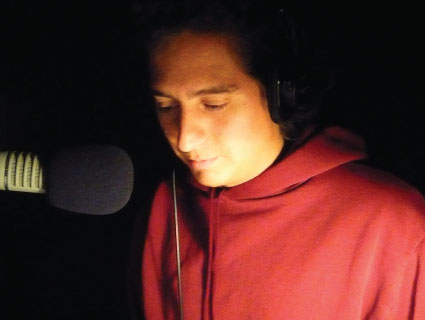 With Radio Ambulante, a podcast launched in May via Kickstarter, the Peruvian-born, Alabama-raised novelist Daniel Alarcón (War by Candlelight, Lost City Radio) brings the Ira Glass sensibility to Spanish-speaking listeners. The first episode, “Mudanzas“ (“Moving”), ping-ponged from North Carolina to Lima to Tegucigalpa in a series of bittersweet migration stories; the most recent offering, “Milagros” (“Miracles”), launches today.

While Alarcón aims to air his show on radio stations throughout the Americas, his iTunes-savvy home audience is key. “There are 50 million Latinos here and more Spanish speakers than in Peru,” he told me when we met in an Oakland café just as his podcast was picking up steam. “That’s why I can’t believe no one did Radio Ambulante before.”

Mother Jones: After the publication of Lost City Radio, the BBC sent you to Peru for your first radio assignment. What was that like?

Daniel Alarcón: Amazing. I’d been on tour for eight months. You read the same section of the novel every night. You answer pretty much the same questions. You do interviews that are all basically the same. At the end of a year of this rote performance, this was the antidote. And it was beautiful. I remember calling up a friend of mine and just telling him how—this sounds really cheesy—I feel so alive. [Laughs.] And we did all kinds of interviews. We did interviews in Lima. We did interviews in little towns. We interviewed, like, the mayor. We interviewed, like, musicians. We interviewed singers and laborers and all kinds of people.

MJ: And it planted a seed for Radio Ambulante.

DA: I’ve always benefited from those kind of like journalistic experiences because they put you in a situation where you otherwise wouldn’t be. You’re forced to, you know, find your way, learn something about it, make a friend, gain someone’s trust. I think that’s a really unique way to see a country. And it’s a unique way to experience your own country, being that I’m both a foreigner and a native. It was an action-packed week or so. We did interviews in English and in Spanish, and a lot of the Spanish tape wasn’t used in the end. I had the sense of, “Well, wait. What about those other voices?” I think that’s when I first had the idea of creating a space for this kind of narrative nonfiction radio in Spanish, so we wouldn’t lose these voices.

“On the right you have the kind of hysterical language of the brown hordes coming to destroy the country from the inside.”

MJ: You’ve talked about avoiding a villain/victim dichotomy in choosing stories for Radio Ambulante. What did you mean?

DA: On the right you have the kind of hysterical language of the brown hordes coming to destroy the country from the inside. And then a lot of times on the left you have a kind of storyline where they’re only interested in Latinos if the Latinos are the poor, helpless victim. We know that the stories are much more complicated. They’re much more interesting than that. Not that those stories aren’t important—it’s just that that’s not the whole story.

MJ: Do you think it’s important that Latin American stories be heard in the States?

DA: For fiction, I’m not particularly nationalistic. I’m not like the Hugo Chávez of Latin American letters, you know? I want people to read good work. If I see someone reading a book by Lorrie Moore or Jennifer Egan, I’m psyched. If I see them reading X Latin American Writer Who Sucks, I’m not psyched. But in terms of news, I do think that’s important. We’ve been really focused on the Middle East for the last decade. It took the May Day marches of 2006 to put Latinos back up front, and unfortunately the way that’s manifested itself has been through this kind of xenophobic response. As a Latino living in the United States, obviously that’s very disturbing. As a Latino who grew up in Alabama, to see what’s happening in Alabama is very disturbing.

DA: It’s funny. One of the episodes that we’re working on is called “El Encargo,” which is loosely like “the errand” or “the chore,” “the task.” But it’s also super Latin American: like you’re about to travel and your tía calls you up and she’s like, “Oh, can you take these 16 pair of Reeboks back to Peru to give to each one of your little cousins?” [Laughs.] That’s something that you’d say to Latin Americans and everyone gets it. Obviously there’s universalities that transcend culture and borders and all of that. But I do think there’s certain cultural references that people get.

MJ: How are people responding to the show in Latin America, where podcasts and narrative radio journalism are a novelty?

DA: People are really interested in it. But yeah, literally, people don’t know what a podcast is or how to sign up for it. And, in a more elastic sense, they don’t know what the hell you’re supposed to do with a 15-minute radio piece about a guy in a boat, you know?

MJ: You’ve worked in all sorts of genres—novels, short stories, nonfiction, graphic novels, blogs, and now radio. How much does story drive form?

“I like radio because you can do an hour-long interview and then three days later have a finished piece. That’s a really nice change for a novelist, you know?”

DA: I’m really excited about thinking in terms of radio, thinking in terms of audio. But my first and last love will always be fiction. It’s the first thing I do in the morning and the last thing I do at night. I love the novel because it’s like a love affair. You can just fall into it and keep going, and you never know where it’s going to take you. I like radio because you can do an hour-long interview and then three days later have a finished piece. That’s a really nice change for a novelist, you know? I think probably the thing I’m worst at is the most ephemeral stuff, like blogs. I find it really hard to write. And I’m often been asked to write columns for papers in Peru. And I can’t. I would die. There’s no way I could write a column.

DA: I just don’t think in 800-word chunks. Just doesn’t happen. Writing an op-ed feels like I’m taking the SAT. It’s so hard. It feels like homework. And if it feels like homework, it just doesn’t get done. Which is why the hardest parts to write for Radio Ambulante are the descriptions of each piece that are literally just a little bit longer than a tweet. I find it torturous, torturous. I write 1,000 words a day first thing in the morning but I cannot write 240 characters to describe a piece that I spent six weeks working on with a producer. And the transitions between the stories. I mean, that was brutal. Brutal.

MJ: How are you balancing Radio Ambulante with your writing?

“A novel is like an animal you have to hunt down and kill. If you let it sit for two days, it’s got a two-day head start.”

DA: I’ve been getting up at five and working on my novel for three hours and then transitioning to a normal workday. A novel is like an animal you have to hunt down and kill. If you let it sit for two days, it’s got a two-day head start. So, if I just look at it every day, I’m so much better off. The creative part of the day is over the moment you check your email. You won’t have another productive thought until the next morning. The thing is, you can’t be executive producer of a project like this—where you’re managing 35 stories in 10 different countries—and pretend that you’re going to be like Pynchon and not check your email. With all due respect to Pynchon and every other hermit writer out there, it’s just not possible. So I have a love/hate relationship with the internet. It’s obviously the central tool of how I work, and how I keep in touch with all the writers and then producers that I’m collaborating with. Skype saves my life, you know.

MJ: What are you writing these days?

DA: I’ve been working on a novel called At Night We Walk in Circles for coming on six years. Lost City Radio took seven, so I’m right on schedule!

While Radio Ambulante podcasts are in Spanish, Alarcón et al. occasionally produce stories in English. Check out this Ruxandra Guidi piece on the US-Mexico border in Tijuana.