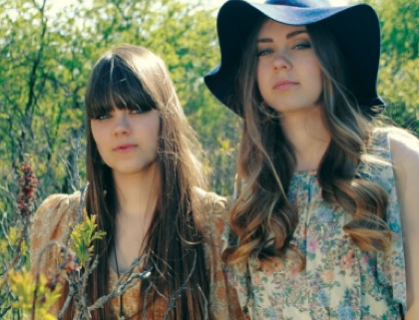 Is it any wonder that Johanna and Klara Söderberg of the band First Aid Kit are in high demand? The attractive young sisters from Sweden sport ’70s-inspired wardrobes that would make Stevie Nicks drool and write forlorn folk ballads that recall true, vibrant Americana. I was prepared to interview them at Austin City Limits, but their schedule changed and they had to cancel. As fate would have it, I ran into Johanna at the hotel gym, but then figured she probably didn’t want to be interrogated while running. So I caught up with the pair later, by phone, as were preparing (of course) for their next tour.

First Aid Kit’s itinerary may be chaotic, but the sisters’ music has a timeless quality. You could easily imagine them singing it, in their same long-flowing skirts, around a campfire on the Oregon trail during the 19th century—well, the Swedish equivalent—or strumming guitars inside a big silver bus, living out a real-life Jack Kerouac novel.

In any case, global fame isn’t poisoning the sisters’ music. (There are definitely no Lady Gaga beats to be heard, here.) As the song, “King of the World,” goes: “At 10 in the morning, I was laughing at something, at the airport terminal…Well passing the border from a state to another, filled with people whom I couldn’t help to relate to.”

I spoke with Johanna and Klara about preshow rituals, covering Paul Simon for Paul Simon, and all the dicks on the dance floor.

Mother Jones: Do you see any differences between touring in the US and Europe?

Johanna Söderberg: In the US we like Austin and Ashville, and we love playing in the South—

Klara Söderberg: The weather is so exotic to us! We’re really cold in Sweden. But everywhere we play in the States, we’ve gotten such a good response. When Americans go out to a show, they’re ready to party, even if it’s a weekday. They’re totally into it. The whole point of playing a gig is to have a conversation with the audience and it’s so much easier when they’re responsive.

“We do try to kill each other sometimes, but…we always end up friends again.”

JS: European crowds are more respectful; they’re quiet and reserved and listening in a different way. But I wouldn’t say I prefer one to the other.

MJ: Do you have preshow rituals before hitting the stage?

KS: Before we go on stage, we listen to a lot of female musicians like Emmylou Harris, Jenny Lewis, and Joanna Newsom. They’re all strong women who make incredible music and I like to think about them before I go on stage. I want to channel them, have them inspire my performance.

MJ: What do you think about the gender ratio in Indie rock?

KS: We’re the only girls in our touring party, so I think we’re setting a good example. But it’s so hard to find other female technicians and tour managers. Where are they? We miss other ladies. It’s so typical that women aren’t supposed to do the technical stuff, but I wish that there were more girls out there. It would be good for everyone. There are so many dudes on the dance floor. I mean too many dicks. [That’s a Flight of the Conchords reference.]

MJ: Is it harder or easier working with a family member?

KS: We do try to kill each other sometimes, but we’re very close and we always end up friends again. When we’re working creatively, we can throw out ideas and I don’t have to be scared of what Johanna is going to think because I already know. I usually come up with that first idea, and then I usually get stuck, so I turn Johanna, and she says, “Let’s do this.” And we end up working together.

MJ: Anyone else you’re dying to work with?

JS: It’s hard to say, as Jack [White] and Conor [Oberst] are people we’ve always admired and never, ever thought we’d get to work with, so it’s weird that’s now come true. We got to meet Paul Simon this summer and we performed his song “America” for him, so we’d love to sing with him. We’re just overwhelmed by the talented people we’ve gotten to work with, but we’re not sitting around dreaming about it—it just kind of happens.