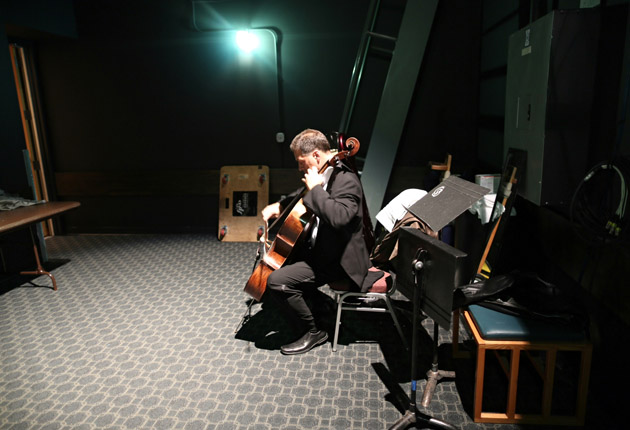 Update (March 19, 2013): Adding to the list of troubled orchestras, the San Francisco Symphony has canceled an East Coast tour following the breakdown of labor negotiations, according to the New York Times, and the musicians have gone on strike.

Last Friday, for the first time in months, the Minnesota Orchestra was back together again. Conductor Osmo Vänskä, a former principal clarinet who attends rehearsals in t-shirts and sometimes a Czech soccer jersey, his body swinging around vigorously from the knees, led his musicians in a rousing performance of Sibelius’s 2nd and 5th symphonies. Vänskä is possibly the best conductor in the world when it comes to Sibelius. Alex Ross, a critic for the New Yorker, has called him a “genius” in that realm, and if the orchestra’s Grammy nomination is any indication, the recording industry seems to agree.

Sibelius, the late Finnish composer, described his Symphony No. 2 as “a struggle between death and salvation.” It starts off tepid and a little sweet, descends into turmoil, and then the horns carry out a proud resolution. The struggle element (though not the resolution) is fitting, given the orchestra’s situation. After the concert, the musicians parted ways in the bitter Minnesota cold to return to an equally bitter lockout that began in October, a labor dispute complicated by the orchestra’s dwindling endowment and the very troubling question of whether it manipulated its books to show a $6 million deficit as an excuse to give its players a 30 percent pay cut. Of late, the musicians have been performing each concert as though it’s their last—maybe because they feel it might be.

The Minnesota Orchestra is far from alone: Symphonies in Detroit, Indianapolis, Atlanta, and Chicago have all experienced strikes and/or lockouts over the past two years,* and those in many smaller cities, including Miami, Honolulu, and Albuquerque, have folded altogether. In the spring of 2011, the Philadelphia Orchestra became the nation’s first major orchestra to file for chapter 11 bankruptcy—it emerged from restructuring last July with 10 fewer musicians, and a 15 percent pay cut for the remaining players.

A weak economy, compounding the longstanding challenge of a dwindling audience, have brought about a massive identity crisis in the classical music world. Orchestras have high overhead costs, and they simply aren’t as popular as they once were. “We see them going, one after another, either into a wall, or to war,” says classical music writer Norman Lebrecht (one of whose books is titled The Life and Death of Classical Music). Lebrecht blames many of the problems on poor management and the fact that “both sides are frightened of change.”

Negotiations for a new contract began last April in the Twin Cities, but the two sides can’t seem to reach any agreement. The management contends that it has cut costs by laying off administrative staff and reducing their pay, among other measures. “We’ve been very transparent with the musicians about these challenges for the last several years,” said Minnesota Orchestra president and CEO Michael Henson. “To continue operating at these losses would not be sensible.”

Musicians’ salaries—which ate up nearly half of the orchestra’s $32 million budget last year—are a huge part of the equation. The players make $135,000 on average, not including benefits that include insurance policies for their valuable instruments, plus up to 26 weeks paid sick leave (to protect injured players) and 10 weeks paid vacation leave.

“It is very difficult for many people in the community to believe that the Minnesota Orchestra is really in financial trouble when they’re building a $52 million lobby on the front of the building,” counters Tim Zavadil, a clarinetist and the orchestra’s de facto spokesman, referring to renovations undertaken this year prior to and during the lockout. “And never in our wildest dreams did we imagine that they would ask for [a] 30 to 50 percent pay [cut].”

Zavadil and his fellow musicians believe that the management drew heavily from the orchestra’s endowment in 2009 and 2010 to secure donations and state bonds, and then slowed down its withdrawals in 2011 so that it would head into contract negotiations showing a large deficit. Meeting minutes published by the Star Tribune confirm the finances, but the orchestra maintains that its actions had nothing to do with the labor negotiations.

The musicians haven’t stopped playing. In October, they replaced their canceled season opener with a sold-out concert that they organized themselves, playing Dvorak’s cello concerto and Shostakovich’s Symphony No. 5. MinnPost jeered that they chose Shostakovich because it was familiar to them “and because it carries a message: neener-neener, Stalin.”

Conductors typically keep their distance from labor disputes, but Vänskä entered the fray in December with a heartbreaking letter to both sides, pleading for them to find common ground: “When the lockout is over,” he lamented, “the Twin Cities may have a ‘professional orchestra,’ but inevitably not the same one, nor a highly regarded one.”

Indeed, major donors have taken their concerns to the op-ed pages, and one local writer has referred to the situation as the “orchestral apocalypse.” The February 1 concert was actually a masterful work of Minnesotan passive-aggression: Vänskä probably wouldn’t have been there had the Mayor and a wealthy donor not decided to “host” the event and then publicly invite the orchestra management to participate, which gave them little choice.

As the months wear on, observers are becoming increasingly nervous that the ongoing dispute, as Vänskä suggested, will be the orchestra’s undoing. “It’s very very hard to be optimistic,” says Lebrecht. “None of the disputes have been as long as Minnesota, or as harsh.” Drawn-out labor disputes among orchestras tend to end with a change in management, he adds, and many orchestras never fully recover.

As bad as times may be, it seems the nation’s municipal orchestras are perpetually in financial trouble: A New York Times headline from 1903, the early years of municipal orchestras, reads: “‘Permanent Orchestra’ Season a Bad One: Poor Financial Returns in Most Cities that Support This Form of Music.” During the Depression, when orchestras in the Northeast were losing a combined $1.3 million annually, their patrons discussed merging them together. When the San Francisco Symphony managed to shrink its deficit during the 1960s, the Times declared it a “musical miracle.” (Read our interview with SF Symphony conductor Michael Tilson Thomas.)

An orchestra, much like a university, is not the sort of business where productivity goes up and up. According to a 2008 analysis by Stanford University professor Robert Flanagan, when orchestras increase their costs over time by raising musicians’ pay, it’s nearly impossible to cover that increase through higher ticket sales. Instead, orchestras have to grow their fundraising base, recruiting more well-heeled donors who believe cities need a symphony.

Some orchestras have learned to innovate. The Cleveland Orchestra, widely considered one of nation’s best, was running multimillion-dollar deficits throughout the 2000s—by 2006, it was $13 million in the red. Its solution: Go where the fans are. “The idea of performing in Florida came about relatively early,” says executive director Gary Hanson. “The only tour that the Cleveland Orchestra had been on where we had earned money at the margins had been a tour to Florida.” Now the Cleveland Orchestra spends several weeks of its season in residency in Miami and also Vienna, and has set up local boards of directors to raise money in each satellite location.

“The subscription business model is breaking down,” says Hanson, who believes that all orchestras will have to change the way they operate if they want to survive. For Cleveland, besides “more concerts in more places,” this means “more kinds of music for more people.” The orchestra has teamed up with popular musicians such as Bela Fleck, and accompanies screenings of Charlie Chaplin films. “You get the Bela Fleck fans in the door. That’s show business!” Hanson said. The orchestra still plays its classical season, but has fewer concerts than in the past.

The Detroit Symphony, which was almost ruined by a strike in 2010, now sells $25 season passes for students, projects concerts onto the outside of its hall, and live-streams them in high definition. The Los Angeles Philharmonic has brought on the enigmatic Gustavo Dudamel, perhaps the biggest living classical celebrity, to spark interest. Other orchestras are doing things like playing concerts in the lobby so that fans can be close to the music. In Europe, one is touring pubs.

“I don’t think people assume anymore that the generation coming up, the millennials, will behave like the Baby Boomers did—that they’ll hit 50 and start going to concerts,” says Jesse Rosen, president of the League of American Orchestras. And orchestra attendance was falling for all age groups throughout the 2000’s, before the recession began. “People who like classical music now are equally likely to be big fans of world music, and dubstep, and electronica,” Rosen says. “Their tastes are more eclectic so they’re not as loyal as they used to be.”

Hanson knows he’s fighting an uphill battle. In January 2010, Cleveland Orchestra had a brief strike that ended with the musicians taking a pay freeze, and the musicians again had to make a few concessions during contract negotiations this past fall. And the orchestra is still running deficits. But it’s also on track to post record ticket sales this year—revenue for November and December was up by nearly 50 percent from the same time in 2011. “The people at Cleveland are at least trying to think outside the box,” said author Lebrecht.

It’s telling that most orchestras weren’t bothering with these new ways to connect with their communities until the recession drove them to it. But they seem to be awakening to the fact that they will have to innovate in order to survive—to figure out ways they can maintain the traditional repertoire while adjusting to the tastes of a modern audience. The “permanent orchestra season,” as the Times called it, will probably always be a bad one, but with a little hustle and grit, many orchestras will find a way to play on.

Correction: A previous version of this article included St. Louis in a list of cities whose orchestras had strikes or lockouts in the past two years. The St. Louis labor dispute was actually in 2005.