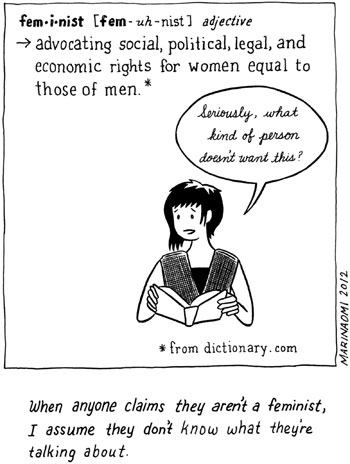 For their new comics anthology, The Big Feminist But: Comics about Women, Men and the IFs, ANDs & BUTs of Feminism, editors Shannon O’Leary and Joan Reilly enlisted a group of artists and writers ranging from their mid-20s to mid-40s to submit comics dealing with their ideas, experiences, and impressions of feminism. The artists’ ages place them as having come of age during or after the “Third Wave” of feminism that emerged in the ’90s. Accordingly, the book’s title refers to the often-heard phrases “I’m a feminist, BUT…” and “I’m not a feminist, BUT…” and the resulting work utilizes a range of forms to both explore and critique traditional feminist themes and even question the idea of doing a feminist comics anthology now.

No one theme or approach dominates here. There are first-person explorations of some fairly classic issues done in ways that attempt to defy certainty: In “Boy’s Life,” Bitch magazine cofounder Andi Zeisler says, “I definitely don’t have any illusions about raising the perfect feminist son. I’m not sure what that would even look like,” while the accompanying drawing wryly undercuts her message by depicting her son asking his enthralled mom, “Can I learn to bake?” Many of the artists appear to be looking for ways to address traditional feminist topics and gender roles without being subsumed by them. “Queer, Eh?” by Virginia Paine, is about a young woman who’s looking for a word to describe her sexuality, and is delighted to find that “non-identifying” is indeed “a thing.” And in “Prostitution: for Teens” by Jen Wang, the main character explores the ramifications of writing a non-judgmental young adult novel whose heroes are teenage prostitutes.

Men make up 13 of the 41 listed contributors. In Mark Pritchard and Liz Baillie‘s “Must Respect Women’s Power, No Experience Necessary,” a guy interviewing for a job as an assistant in a women’s self-defense class gets a lecture on male entitlement as part of the interview. He ends up loving the job, which involves getting beat up while wearing a padded suit. Stories about nerdy boys and gay guys dressing as superheroes seem intended to parallel women’s efforts to break out of conformity.

And then there are the strips that go meta, examining the very idea of doing an anthology of women’s comics. “Manifestation” imagines how artist Gabrielle Bell ended up drawing a comic about Valerie Solanas’ infamous “SCUM Manifesto.” “The Labyrinth” by Andrice Arp and Jesse Reklaw includes this exchange between a chicken and a donkey:

Donkey: I guess it’s ironic and fourth-wall-bustin’ to critique a feminist anthology within itself.

Chicken: I know, but this one seems to be a whole different thing. Women and men talking about feminism, to me, is much more interesting then just throwing a bunch of women together and assuming that the result will be a feminist statement. 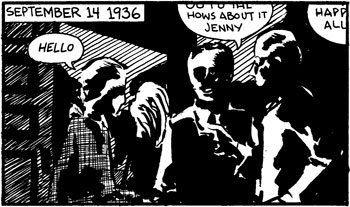 “The Dead of Night” by Dylan Williams

As the editors point out, the second thing that connects these varied contributions is the comics form itself, or “sequential art,” as Will Eisner called it. It’s not the point of the anthology, of course; but as a comics fan, I enjoyed the range of contemporary approaches to comics that this book pulls together. “My Horrible Heroines,” an exploration of one woman’s obsession with self-destructive heroines, is drawn by Shannon K. Garrity in a wide-eyed Manga-influenced style. Particularly breathtaking is the late Dylan Williams‘ “The Dead of Night,” where people in an office building after-hours are presented in a striking noir-ish style. A cleaning lady walks by men chatting at the end of their workday; her isolation is represented by their word balloons being cropped halfway out of the panels as she walks past, head down.

Excerpts from the comics in The Big Feminist But: 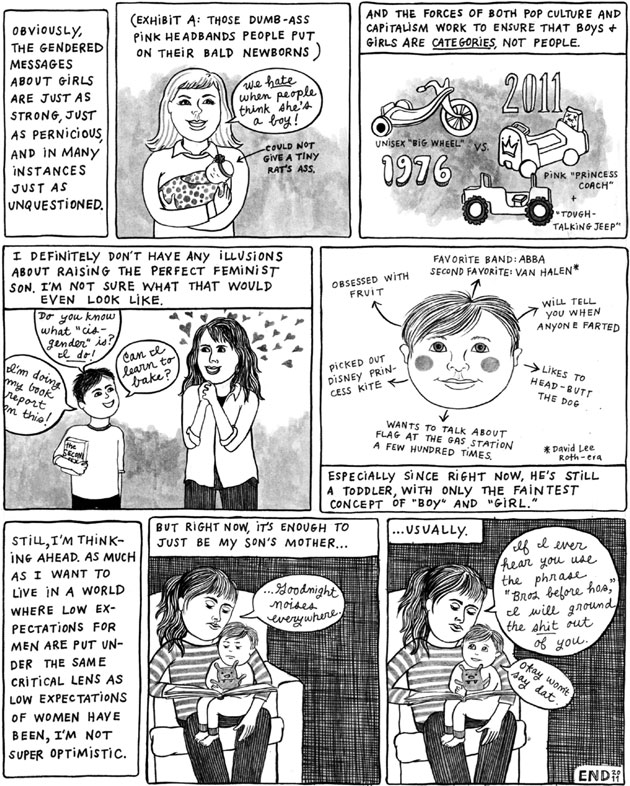 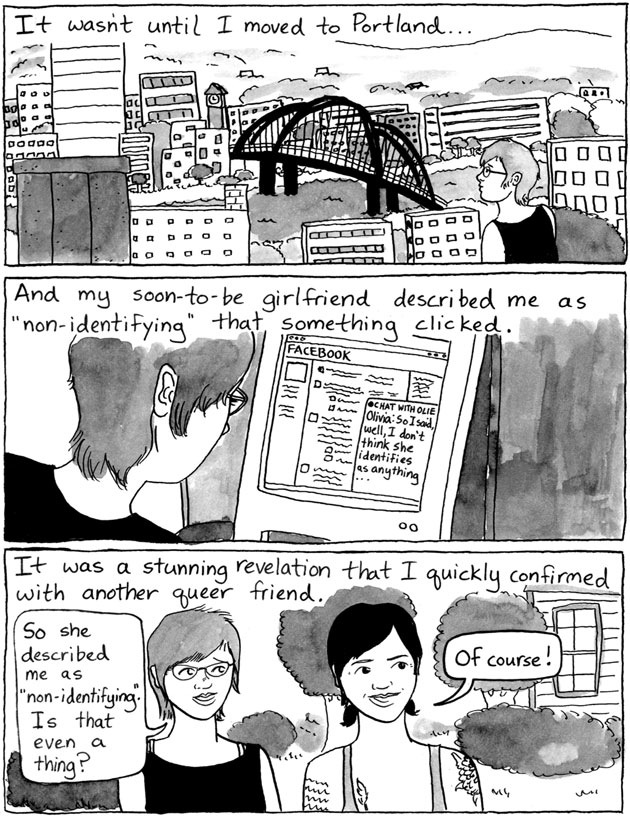 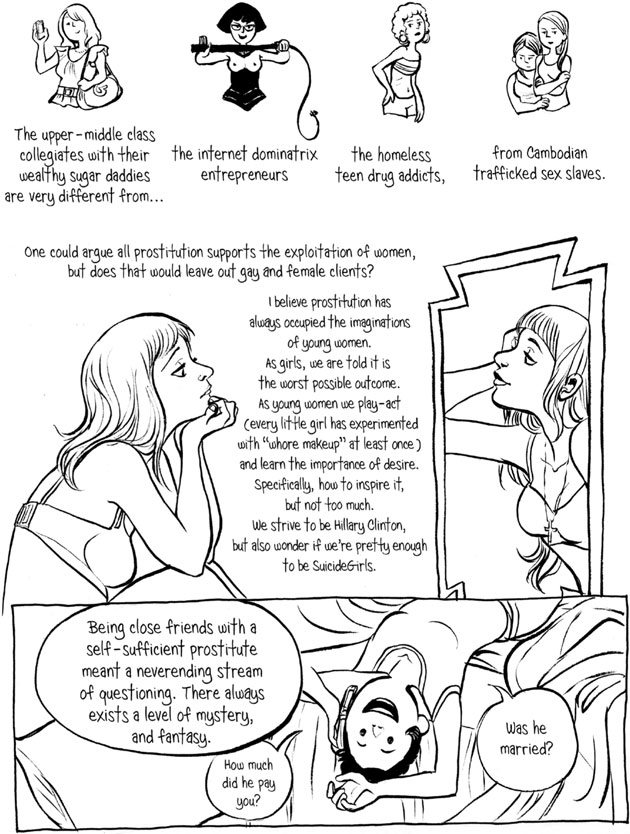 “Prostitutes: For Teens” by Jen Wang 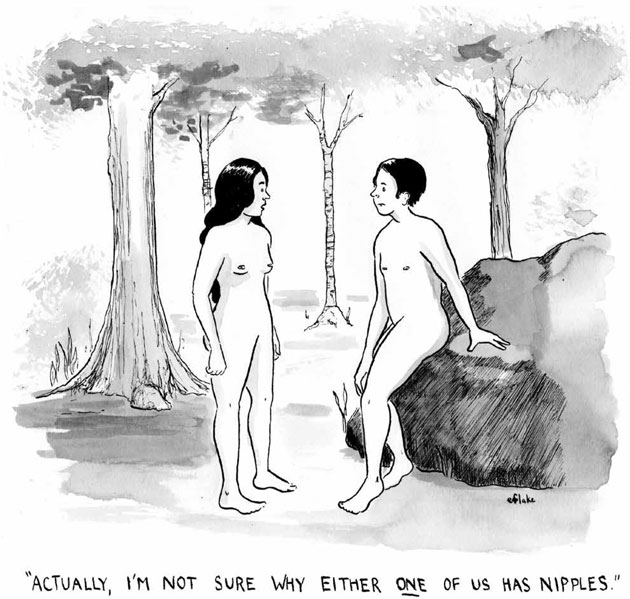 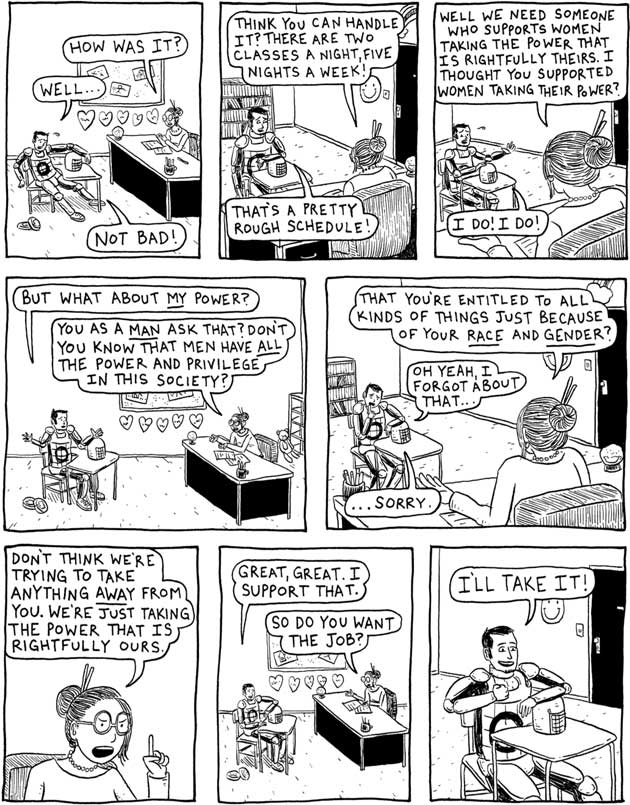 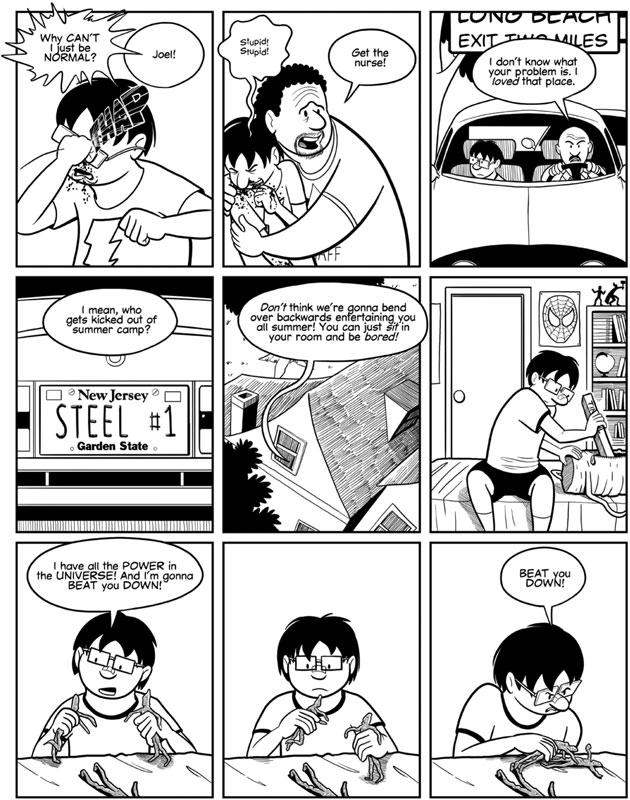 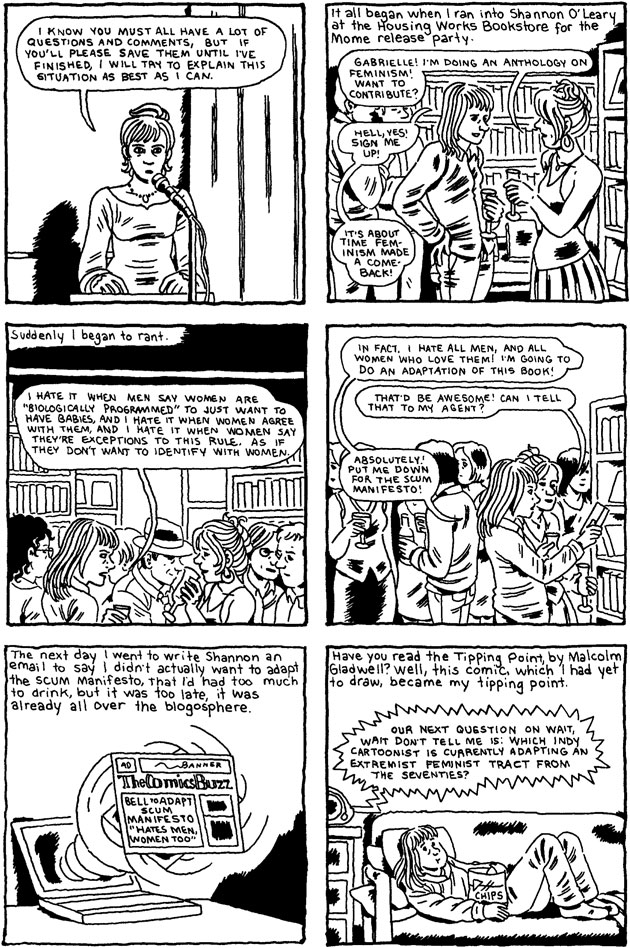 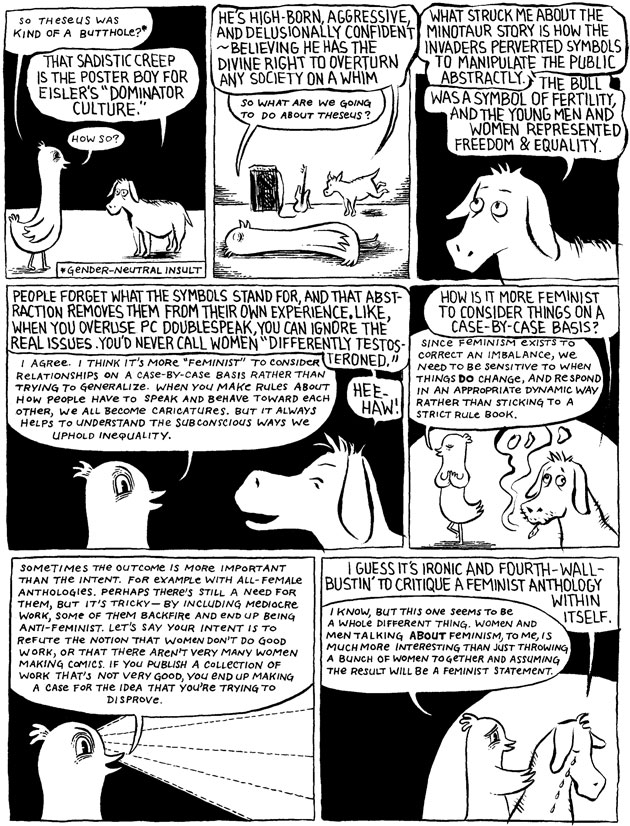 “The Labyrinth” by Andrice Arp and Jesse Reklaw 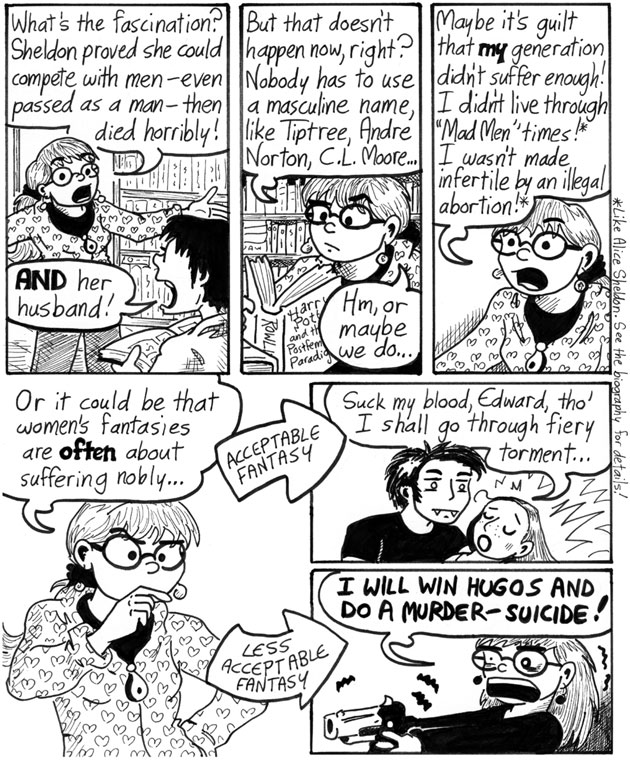 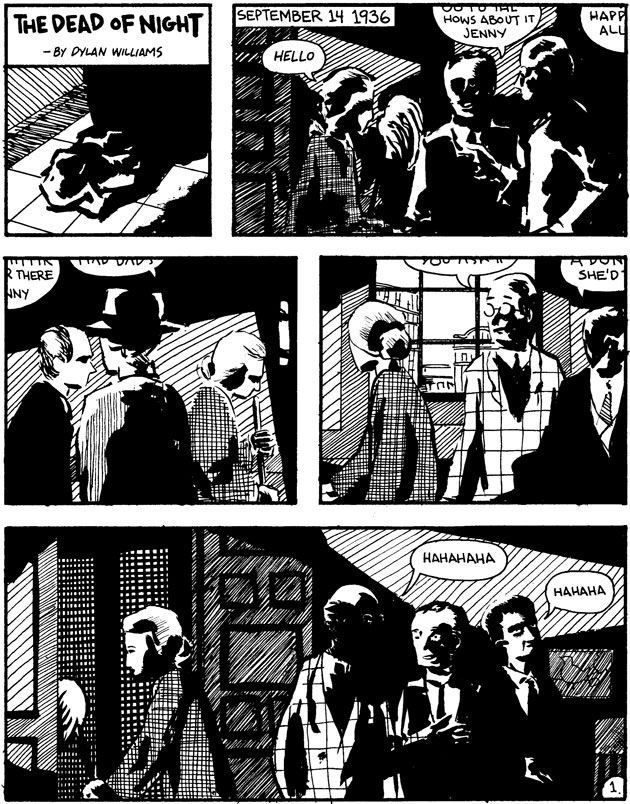 “The Dead of Night” by Dylan Williams