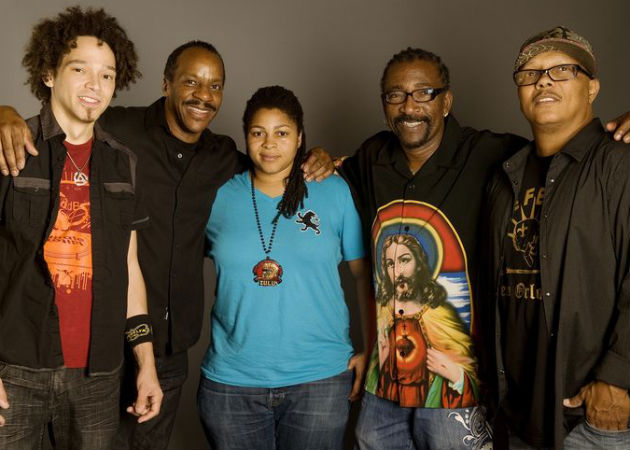 Coming off a successful album release (including a rave review from the New York Times) and gearing up for a fall tour, Dumpstaphunk was in good spirits when I caught up with them after their set at San Francisco’s Outside Lands music festival on August 11.

“For some reason, everybody seems to get what we’re trying to do,” explained frontman Ivan Neville. “Everything we’ve read about this, it’s like, ‘wow.'”

Dumpstaphunk is a thoroughly New Orleans band: Ivan Neville, son of the Neville Brothers’ Aaron Neville (and a former member of the family band himself), pulled the group together 10 years ago from people he knew from playing live with each other at events like Jazz Fest. Many of them had known each other for years around New Orleans, and guitarist Ian Neville (also of the Neville brothers clan) says that, like the chemistry of romance or friendship, Dumpstaphunk simply sounded like a band from the start. “It locked,” he says, “it felt right.”

Playing at Outside Lands felt right, too; San Francisco’s Sly and the Family Stone and Tower of Power are huge influences on Dumpstaphunk, which draws on a range of funk, R&B and jam bands. Recently, they added singer and drummer Nikki Glaspie to the group, who performed a ripping rendition of Betty Davis’ “If I’m In Luck” (which is also on the album) during the show. Glaspie’s version is more full-bodied than Davis’ but still channels her smokiness—and you can’t take your eyes off her while she sings it. Despite being partially obscured by her drum kit, at the back of the stage, with four grade-A musicians in the audience’s sightline, Glaspie shines.

Most funk bands today are geared towards live performance. Dumpstaphunk, whose album is tighter and more structured (think: Meters) than their live set, can get away with being both a live and a studio band. Ivan says that their approach in the studio is similarly casual to the way they approach playing live. “We don’t plan a lot,” he says.

Those who like Dirty Word because it sounds tight and coordinated can skip the live show. The set at Outside Lands was solid funk music but the musicians weren’t in tight conversation the way they are on the album—this was long, afternoon banter. For those curious to see a group that’s deeply rooted in New Orleans funk but committed to building something new, the band will be on tour through the fall.