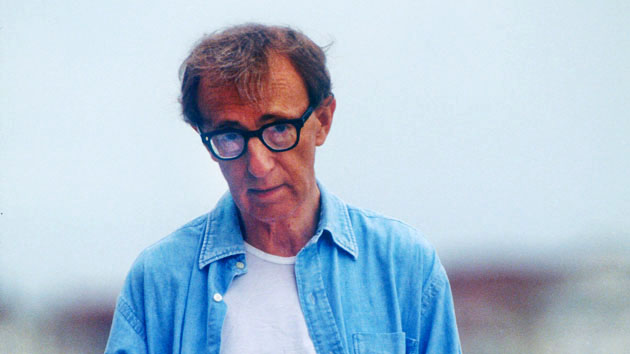 The road to the Academy Awards is littered with scandal and smear campaigns—efforts on behalf of studios and producers that can be just as nasty and coordinated as political campaigns. (In 2010, rival studio operatives actually tried to peddle to reporters a rumor that Pixar made an “It Gets Better” video just to win over Academy voters for Toy Story 3.)

But Oscar time also means real controversy, and this year is much darker than most. Here are the biggest controversies and outrages of the 2014 Oscar season, ranging from the petty to the absolutely terrifying. Oscar night starts airing on ABC on Sunday at 7 p.m. EST.

In February, Nicholas Kristof’s blog at the New York Times published an open letter by Dylan Farrow, the adoptive daughter of the celebrated filmmaker. The letter describes, in horrifying detail, sexual assault she claims to have suffered at the hands of Allen—when she was seven years old. Allen has always denied the allegations, which surfaced in the early 1990s, and he was never charged. This was the first time Farrow shared her claims publicly. “What if it had been your child, Cate Blanchett? Louis CK? Alec Baldwin?” she wrote, calling out Blue Jasmine‘s stars and other actors who have worked with Allen. “What if it had been you, Emma Stone? Or you, Scarlett Johansson? You knew me when I was a little girl, Diane Keaton. Have you forgotten me?” (For responses from Allen and Allen’s representatives, click here.)

These accusations matter far more than any awards ceremony. Regardless, you’ve probably seen too many headlines like this recently: “Will Woody Allen scandal cost Cate Blanchett an Oscar?” For what it’s worth, Blanchett already has an Academy Award.

2. Philomena has been attacked for supposedly being anti-Catholic propaganda. The Best Picture nominee (directed by Stephen Frears and starring Judi Dench and Steve Coogan) has generated moderate controversy for allegedly being anti-Catholic. The film is based on the true story of Philomena Lee (played by Dench), a woman who gave birth out of wedlock and was forcibly separated from her child by conservative Catholics in Ireland. The New York Post denounced the movie as “another hateful and boring attack on Catholics.” The Catholic League (a group led by Bill Donohue, who specializes in a special brand of petty conservative outrage) released a document titled, “Debunking ‘Philomena,'” and blasted out press releases slamming the film during the months leading up to Oscar night. Here’s one of them: 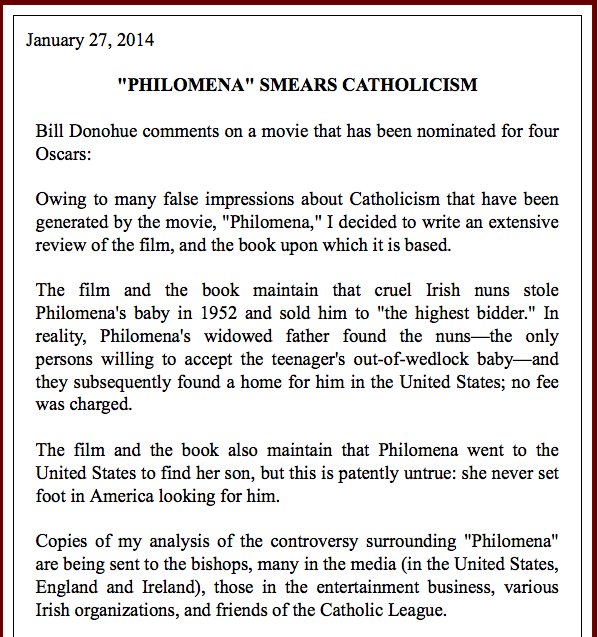 The real-life Philomena Lee issued a letter defending the film against these charges, and the Vatican even hosted a screening. Lee and Coogan met with Pope Francis when they took their campaign for release of secret adoption files to the Vatican. During an appearance last week on HBO’s Real Time With Bill Maher, Coogan said that the pope’s private secretary voiced support for the film. According to Coogan, when he pointed out to one of the pope’s senior advisers that certain right-wing Catholics in the US had lambasted the film as anti-religious and anti-Catholic, the adviser respond, “That’s not who we are.”

3. Christian song in an obscure Christian film gets its Oscar nomination pulled. “Alone Yet Not Alone,” a song performed by 64-year-old quadriplegic evangelical author Joni Eareckson Tada, was recorded for the little-known 2013 Christian film of the same name. The film, set in 1755, is based on the story of two young sisters threatened by religious persecution and Native American tribes. It was produced by a team of evangelical filmmakers, outside of the sphere of a secular Hollywood, but somehow managed to score an Oscar nod for best original song. Controversy struck in January, when the Academy announced that it was rescinding the nominations for songwriter Bruce Broughton and lyricist Dennis Spiegel due to a breach of ethics regarding improperly lobbying for the film.

4. The feds are going after the real “Wolf of Wall Street.” In Martin Scorsese‘s latest Best Picture nominee The Wolf of Wall Street, Leonardo DiCaprio plays Jordan Belfort, the extremely debauched cofounder and chairman of Long Island brokerage house Stratton Oakmont, who went down for securities fraud and money laundering in the 1990s. (He served 22 months behind bars, and was compelled to pay $110.4 million in victim restitution.) Belfort, who makes a cameo at the end of the film and who has paid out only $11.6 million, isn’t through being targeted by the feds. Via the Hollywood Reporter in January:

There’s now a dispute over continued payments. The U.S. government contends that Belfort needs to continue to pay restitution at the rate of 50 percent of his gross income. But according to prosecutors, Belfort argues that he is no longer obligated to comply with a payment plan because his supervised release has terminated.

Red Granite Productions purchased the film rights for Belfort’s memoir for $1.045 million in 2011, according to government documents. Of that, Belfort got nearly a million dollars, but paid only $21,000 in restitution in 2011.

Here’s a video that DiCaprio made to endorse Belfort’s public speaking business:

5. Captain Phillips glosses over the captain’s possible recklessness. Paul Greengrass‘ Captain Phillips (another movie up for Best Picture) is based on the true story of Richard Phillips, played by a New England-accented Tom Hanks. Phillips was the merchant mariner taken hostage by Somali pirates in 2009. After being held for five days aboard a lifeboat, Phillips was rescued when Navy Seal snipers took out three of his Somali captors. “I share the country’s admiration for the bravery of Captain Phillips and his selfless concern for his crew,” President Obama said in a statement on April 12, 2009. “His courage is a model for all Americans.”

The film, however, was knocked for not properly conveying that Phillips might have actually put his crew in danger. Several former employees have suggested (via lawsuit) that his negligence caused the hostage crisis, and he told CNN that he ignored “numerous warnings that urged him to go out to sea.” The film might also exaggerate Phillips’ heroics. Despite media reports to the contrary, Phillips readily admits that he never offered himself as hostage to ensure the safety of the crew. Regardless, Captain Phillips shows him heroically sacrificing himself as he and the pirates depart the ship on the lifeboat.