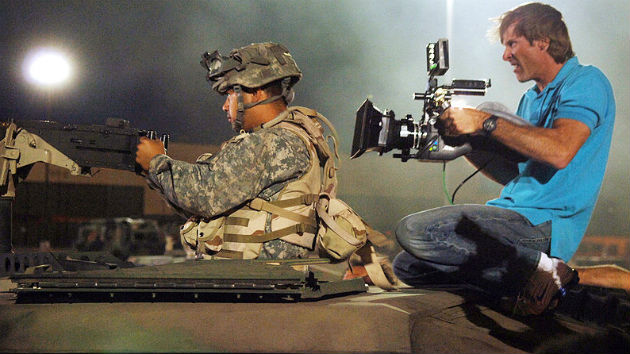 Director Michael Bay is one of the most successful—if critically detested—filmmakers of the past 30 years. He is worth $400 million. He lives the life of a consummate playboy. His explosion-heavy action films (The Rock, Armageddon, the Bad Boys movies, the Transformers flicks, etc.) have grossed over $4.5 billion worldwide. His new movie, Transformers: Age of Extinction (released on Friday), is also expected to make all the money.

But what about his politics?

When I talked to the 49-year-old director last year, he demurred on the question of whether he leans right or left: “Yes, I am a political person, and I have my views about America,” Bay told me. “I’m very proud of my country; obviously it’s going through a lot of turmoil, and we have a very ineffectual government… It doesn’t matter at all [whether I’m liberal or conservative]—it’s not a part of what I do. I don’t feel the need to go out and tell people what to believe politically.”

Bay is obviously more private about his politics than, say, mega-producer Jerry Bruckheimer, who worked with Bay on some of his biggest hits and is one of liberal Hollywood’s top conservatives. You won’t find much at all about Bay’s politics online or in his past statements, and a search of public campaign finance records databases turned up nothing.

However, Bay did tell me that, though he doesn’t receive a writing credit, he works closely with his screenwriters and will tweak the scripts as he sees fit. And there just so happen to be many hints of political conservatism in his movies. Out of the 11 movies Bay has directed, the one truly left-wing outlier is The Rock (1996), starring Nicolas Cage and Sean Connery. The action film depicts the blowback from illegal American covert operations overseas, and is critical of gun-toting “patriotism”; it was also co-written by West Wing creator (and diehard liberal) Aaron Sorkin, so there’s that.

But much of Bay’s filmography is loaded with political content and attitudes that your average (stereotypical?) American conservative can totally get behind. In Armageddon (1998), a NASA-recruited team of blue-collar oil-drillers agree to embark on a dangerous mission to blow up an asteroid and save mankind—on the condition that they never have to pay taxes again.

In Bad Boys II (2003), the film’s rowdy-cop heroes illegally invade (and destroy large chunks of) communist Cuba, in the name of fighting the international drug war. The subsequent car chase concludes in front of the Guantanamo Bay detention camp, where a conveniently placed mine tears apart the body of the psychotic Cuban drug lord:

And Transformers: Revenge of the Fallen (2009), starring Shia LaBeouf and Megan Fox, easily doubles as a critique of the Obama administration’s foreign policy. Seriously. In this fictional Transformers universe, Barack Obama is identified as the president of the United States. (George W. Bush appears briefly in the first Transformers, where he orders some Ding Dongs on Air Force One.) President Obama orders the American armed forces to try to engage in diplomacy with the Decepticons (the bad-guy alien robots) and to suspend cooperation with the Autobots (the good-guy alien robots). The Obama administration also agrees to hand Sam Witwicky (LaBeouf) over to the Decepticons—the kind of act of shameful appeasement that the president’s real-life conservative critics so often accuse him of perpetrating.

Fortunately, brave members of the US military disobey these orders (a mutiny, essentially), and the day is saved! (Bay loves the US military, and also patriotism, very much so.)

“Optimus [Prime] truly cares about the future of the human race, unlike the Obama administration, which Bay represents as so prissy and antiwar it just wants the alien robots off the planet,” Mary Pols wrote for Time in 2009. “Bay’s Obama would probably drive his Prius over Optimus if he had the chance.” According to Bay, the reason Obama is in the film is because he once bumped into him—back when he was 2008 presidential candidate Obama—in a Las Vegas airport. Upon meeting, Bay said a couple of nice things to the future president, and Obama in turn complimented Bay by calling him a “big-ass director.”

This exchange was apparently enough to make the director want to turn the Democratic politician into a movie character. Here’s video of Bay recalling their encounter:

And in the new Transformers installment, Mark Wahlberg‘s tough-talking character, whose family property is cluttered with bold American flags, warns despotic, anti-Autobot government agents about “messing with people from Texas.” To be fair, the film can also be interpreted as a shallow pro-immigration-reform robot movie.

Regardless of how Michael Bay views Obama, or Bush, or the Democratic Party, or the Republican Party, or the tea party, his patriotic views may have been best captured in a line delivered by Wahlberg in Bay’s 2013 crime film Pain & Gain: “When it started, America was just a handful of scrawny colonies. Now, it’s the most buff, pumped-up country on the planet. That’s pretty rad.”

As for making public political statements, again, don’t hold your breath. If Bay is going to make a stand, he is way more likely to do so out of his love for animals than any political conviction. In late 2010, Bay offered a $50,000 reward for information leading to the arrest and successful prosecution of a woman who threw puppies into a river. Bay is a dog lover who lives with two gigantic English mastiffs named Grace (after actress Liv Tyler’s Armageddon character) and Bonecrusher (after a Decepticon).

Looking out for puppies. That enjoys bipartisan support, right?