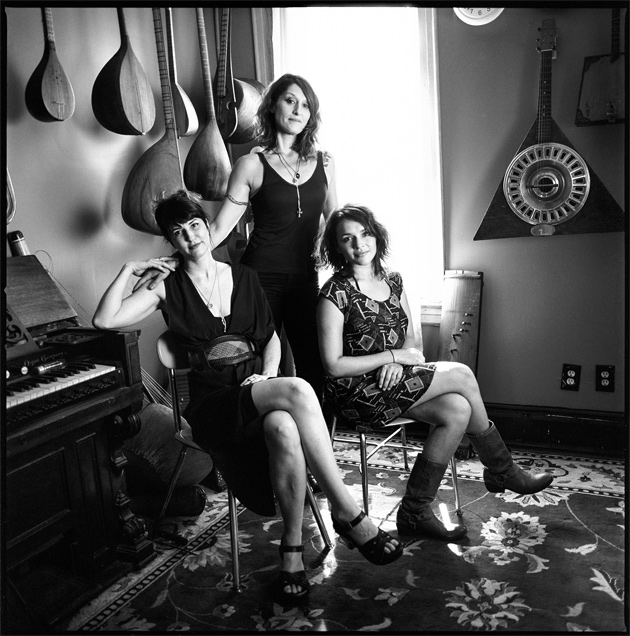 Puss n Boots might be your typical bar band, playing for friends and free beer, if it didn’t happen to be comprised of multiple Grammy-winner Norah Jones, singer-songwriter Sasha Dobson, and Ryan Adams/Jack White bassist Catherine Popper. Starting in 2008, between albums, tours and other professional commitments, the three began playing and performing informal gigs in Brooklyn bars and small venues.

Their brand new album, out today, is No Fools, No Fun, a mix of live and studio recordings of originals and smartly chosen covers by Tom Paxton, The Band, Neil Young, Roger Miller, Wilco, and Leb Joy Nichols. The title comes from “Bull Rider” a song written by Rodney Crowell and recorded by Johnny Cash on his 1979 album Silver, describing the vagaries and glories of life at the rodeo…

The album is intimate, casual, and easily approachable, which is somewhat remarkable given its creators’ demanding careers. I met up with them at the Jalopy Theater in Brooklyn after a long morning of taping performances and interviews.

Norah Jones: All three of us came about playing music through jazz, which is old-ass music. [Laughs.]

Sasha Dobson: You guys know I was a classical person, right?

Norah Jones: Well, that’s even older music!…And then we all kind of split off and ended up doing a lot of different things. But I think we’re all in the same boat: We love old music, we listen to a lot of old music. I think a lot of the covers just came from, “Hey, check out this song—let’s play it!” I’m from Texas, so I love country music. Catherine is from North Carolina, and Sasha is from Santa Cruz, but she loves country music, too.

Sasha: No Fools, No Fun seemed connected to who we are: outlaws in the sense of being an artist within regular society. Even when we make it as artists, it means that we had to completely commit to it, same as the bull rider. The first line is “Well, first you have to want to get off / Bad enough to want to get on him in the first place.”

Norah: “Now that we’re putting a record out, there’s a little bit of, ‘God, I hope this doesn’t ruin it.'”

Catherine Popper: We’re all friends and it’s very causal in terms of, “You should check out this song I heard on the radio.” There’s not as much import around getting a certain sound, or a certain vibe. It’s just friends having fun and playing music, and it’s amazing. People enjoy it. It’s a great recipe.

Norah: There’s not a lot of forward-planning, just like, “Are you guys in town next month? Let’s jam, I want to play some guitar solos.” Music should always be fun—you said it well the other day: It should always be this fun, but it’s not always quite this easy. So it’s really nice to have a band where that’s the deal. And now that we’re putting a record out, there’s a little bit of, “God, I hope this doesn’t ruin it.” But it’s stayed fun because it started out that way, and we’re also not trying to be anything different from what we are when we play at Sunny’s in Red Hook. We’re totally the same. When you listen to the record, that’s what we are.

Sasha: So far, it’s carried us through all of it. Which is pretty different than what we are used to, which is hanging out with a bunch of drunk losers. [Laughs.] That’s where we’re comfortable. Something about not having to make all the decisions yourself—and all the pressure, and all of the eyes—no matter what it is, there’s something about We’re in it together. Even when you run your own band, it’s all fucking on you, everyone’s looking to you for answers.

Catherine: With this group, it’s like a kitchen, and the chef is the one who brought the song in and the other two are the sous chefs, and then then it rotates. I don’t have any projects like this. When I’m a hired gun, I don’t have as much say. Here it’s all a big collaboration, but I would maybe have more say on a song that I would sing.

Norah: We try to keep it even, but not in a rigid way. It’s pretty easy. We are all fans of each other’s songs, which makes it easier, too. We encourage each other. Like, I didn’t want to put my song on the album because I didn’t like something about recording it that day, but they encouraged me. It’s nice.

Catherine: No one’s really vying for anything in this band.

Sasha: We don’t necessarily want another project where we’re only doing our own music. It’s fun to incorporate a song of our own in a different situation, but the whole point is for me to do some of Cat’s music and some of Norah’s.

Norah: The apprehension for me, because I’ve put a lot of albums out, would be—shit, like today—it can be fun, but it can drain you and take the fun out of it, too. Doing a bunch of interviews all day can be really boring. But this doesn’t take the fun out of it because we’re doing it all together.