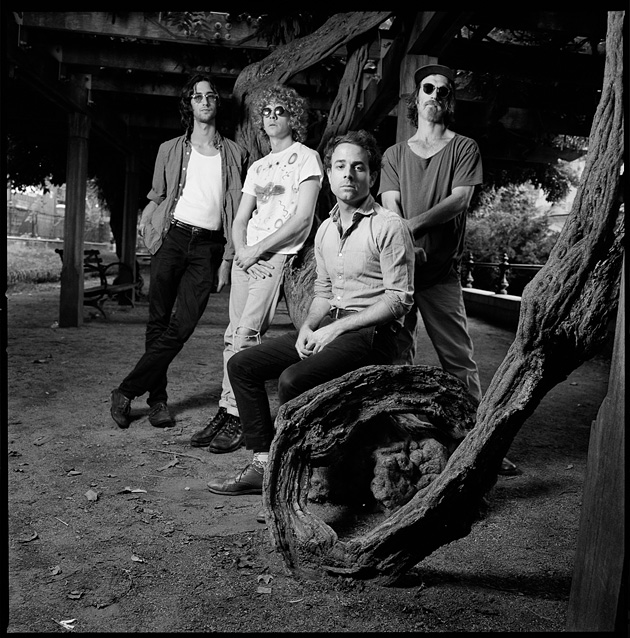 Taylor Goldsmith is Dawes’ primary songwriter, singer, and spokesman, but the band—which includes Taylor’s brother Griffin, Wylie Gelber, and Tay Strathairn—operates as one.

They are among the few younger bands vying for the type of longevity, cohesiveness, and consistency exemplified by the likes of Tom Petty and the Heartbreakers, Wilco, and Bruce Springsteen and the E Street Band. And they’re well on their way, having already opened for Bob Dylan on a 2013 tour, backed Jackson Browne on his 2011 tour, and playing behind Robbie Robertson (The Band) and John Fogerty (Creedence Clearwater Revival). Dawes keeps pushing forward with a frenetic tour schedule and an earnest desire to keep getting better.

In October, they’ll be doing a special tour, stopping in small towns between Los Angeles and San Francisco, to try out material for their next album. I met with Dawes in Manhattan’s Central Park in advance of their SummerStage show opening for, and also backing, Conor Oberst, whom they accompanied during his Upside Down Mountain tour. The following is Taylor Goldsmith’s words:

If what you do for a living is play drums or bass, then that defines you. You don’t want to be some guy missing notes here and there; you want to really speak with it. We’ve always been fans of groups like Little Feat, Steely Dan, the Eagles, or Dire Straits that have that quality. Bands that sometimes are perceived as not the “cool” band, because they’re so good in a technical sense. There are times, like with Dire Straits, where you can get as close as you can be to being good at your instrument and not cross over to that tasteless place. We’ve grown up really feeling the need to express ourselves by how we play. I think our tightness as a band is a byproduct of that.

“I feel like we are getting to a place where you can hear us play one chord for eight bars and think, this is Dawes.”

I feel we’ve never closed the gap as much as we’d like between the show and the record. When I listen to our records now, I think, “that’s not me singing, that’s not us playing; we’re better than that.” There’s an energy that we know how to access on stage that we’ve gotten to here and there on the record. But we don’t feel like the records have represented us entirely quite yet.

I feel like being a singularity as a band is something you want, but you can’t fabricate it. Its either going to happen or not. I’m sure every band feels this way, but I feel like we are getting to a place where you can hear us play one chord for eight bars and think, this is Dawes.

As much as I admire the careers of artists like Paul Simon, Bob Dylan, and even Conor Oberst—who go through different phases to their sound—that’s not really how it works for bands. You look at the careers of Tom Petty & the Heartbreakers or the E Street Band, and unless Bruce is leaving and doing solo records, there’s a very clear continuity that defines all the records together. When you go back and listen to 30 years of Tom Petty records, they are pretty consistent. I love that. That’s the game we’re playing right now.

As a backing band, it’s kind of a compromise, something to navigate. With Conor, it’s very easy to hear a song of his—like something from Fevers & Mirrors where it’s a bunch of friends who don’t play like us—and I could learn those parts exactly. But Connor asked Dawes to play with him. He wants it to be us, and for us to come through. We want to learn this stuff, we want to honor it, we want to play the first three seconds of a song and have people cheer because they know what it is, but at the same time we want to do it within the context of what we do naturally.

“Our philosophy was always that we weren’t the best band. If we accept that, our option is to out-work everybody.”

Our philosophy was always that we weren’t the best band, I wasn’t the best guitar player, and I wasn’t the best singer or songwriter, or any of us the best at what we do. If we accept that, our option is to out-work everybody. If we can out-hustle and be on tour 10 times more than the bands that are better, maybe we’ll have a shot at making this a career. I’ve seen so many songwriters who have seven records, even though they’re not necessarily as great as this artist who only makes one and then sits around for four years and doesn’t know what to do.

That’s what we want to put across. We want there to be parts of the show, parts of the records, parts of the songs, that really show you that it is four guys, and we all have a big stake in it. There are so many great bands where I couldn’t tell you if it’s the same bass player, drummer, or guitar player from song to song. The idiosyncrasies and nuances of musicians have always been so special to us. We’ve wanted to take a swing at carving something like that out for ourselves. I’m proud of the band, I’m not ashamed to say it.