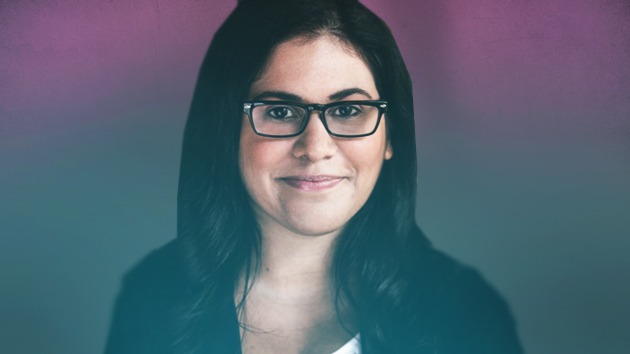 When Sara Farizan presented early drafts of her young-adult novels at writing workshops, her fellow graduate students at Lesley University often responded with a stunned “Huh.” The YA genre tends to be dominated by wizards and trolls, but here was Farizan writing about gay teenage sexual angst. Her 2013 debut novel, If You Could Be Mine, centers on Sahar, an Iranian teenager who considers desperate measures—including sex reassignment surgery—to try to stop her true love’s arranged marriage. Farizan, born in the United States to Iranian parents, figured the book would sell on the fringes. Instead, it quickly landed on several “best YA reading” lists and snagged a Lambda Literary Award. 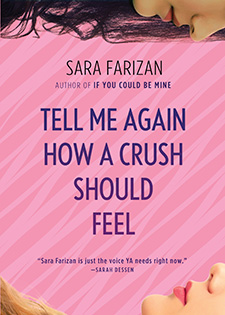 Her new novel, Tell Me Again How a Crush Should Feel, takes place closer to home. Out October 7, it is set in a waspy prep school, not unlike the one Farizan attended as a closeted teen in Massachusetts (“pre-Ellen,” she notes). “I had this outgoing personality, and I was class president, but inside, I was going to my car to cry.”

Farizan’s stories, as full of gossip as any school cafeteria, are nonetheless funny and frank. They deal with uncomfortable issues—and not just for “girls named Emily or Annie.” For that matter, Farizan thinks her fellow YA authors could do better at appealing to kids of all stripes. “Not that Harry isn’t great,” she says. “But if Ron and Hermione had been some other identity—black, Latina, gay—I think that would have made a huge difference.”

Mother Jones: You’ve said: “I write books I wish I had as a teenager.” Can you elaborate?

“It didn’t bother me that my first crush was animated, or a mouse; it bothered me that she was female.”

Sara Farizan: My first crush, as early as age 5, was Gadget the Mouse from Chip ‘n Dale Rescue Rangers. It didn’t bother me that she was animated, or a mouse; it bothered me that she was female. I had these inclinations, and was really terrified by them. This was pre-Ellen of course, and given the culture my parents are from—where a husband and wife is very important, and kids, and then those kids grow up to be doctors hopefully—I spent a lot of years in this silent fear and anger. As a teenager, I had this outgoing personality, and I was class president and doing all kinds of things; but inside was going to my car to cry. I had no problems explaining to people what my Iranian heritage meant, and trying to be a good representative. What did worry me was that I was secretly gay.

MJ: What were you reading at the time?

SF: There were LGBT-oriented books for teens by Julie Anne Peters, and Nancy Garden’s Annie on My Mind. I normally got those from my town library rather than my school. But there wasn’t anything about someone of a different background, you know. They were all girls named Emily and Annie. While those books were really helpful to me, there was a disconnect in that the only LGBT books that I had read about in school were concerning very of-European-descent people.

MJ: You started your books as graduate school projects. Did you think they’d become more than that? 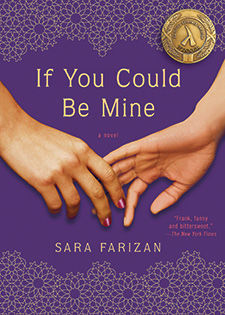 SF: I really didn’t see them ever being published, based on what they’re about. Everyone in the “Writing for Young People” track was writing trolls and wizards, and, um, not LGBT people of color, certainly. I thought perhaps they were too niche. I didn’t anticipate that all of this would have happened—that I’d be speaking to you, for one.

MJ: There are a lot of doctors in your books, and I see that your father was a surgeon. Did you feel pressure to go that route?

SF: No, but I think it was a profession that was understood. It’s one that’s really lofty and prestigious. I think for a lot of Persian parents in the States, being a doctor was the gold standard. There’s this comedian, Amir K, who does an impression of his dad, who’s like, “What do you mean you want to be a comedian? You can be a lawyer, you can be a doctor, you can open up a bank.” And Amir’s like, “Dad, you can’t just go around opening up banks.” [See video below.] My sister and I have gone very media-related routes. My parents are really wonderful about it, but it’s not something they knew anything about. It’s all very new territory for them.

MJ: Is your book, If You Could Be Mine, banned in Iran?

SF: I don’t know that they know about it. I don’t Google myself. I don’t look myself up. One, because I’m a fragile flower. And two, it’s going to mess up anything I want to write in the future.

MJ: You paint a very believable portrait of life in Iran. Did you live there for a time?

SF: I’ve been there. I have the passport stamps. I worry about being exploitative because I’m a Westerner. But for me it was very important, being a member of the LGBT community and dealing with that kind if frustration and isolation, to imagine what it would be like growing up in the country my parents are from.

MJ: The idea of transexualism plays a big role in the new book—though it seems pretty evident that Sahar is not trans. But I was surprised to learn that transgender Iranians can get subsidies for gender reassignment surgeries, and that they have more government protections than homosexuals.

SF: They have identification and status. That doesn’t mean there isn’t discrimination, or depending on the family, that there aren’t complications with that. But it is something that the government sanctions. That is to say, you have to undergo reassignment surgery. There’s no ambiguity. Which is not fair to trans people who don’t want to have the procedure done. And they change your birth certificate right away, which here in the States, we don’t do for our trans citizens as quickly. On one hand, it’s progressive. On the other hand, it’s not, because you can’t accept one group of people [transgendered] and not the other [homosexuals.]

MJ: When did you start writing the new one?

SF: I was 23 and living in LA and interning at a bunch of places writing for TV for teens, and not hacking it. LA was not for me. I’m not very chic or thin or good at schmoozing. I had a lot of time to think, and I started writing Tell Me Again.

MJ: What made you decide to write novels for teens rather than adult?

SF: I guess I can write these books because I’m like emotionally 17. I like voicing characters that age. It’s very honest. Even the things that aren’t said out loud—the thoughts are very honest. I think as we grow older, we kind of lie to ourselves, or things get muddled. We don’t see things as clearly because we’re worried about tax time or keeping in shape for your husband. Not like, “Oh, I like Bobby—that’s what that feeling is. New. Cool.” You might need wisdom and guidance to help you with decisions, but it’s a time when you feel things really strongly.

MJ: Your protagonists are in many ways defined by their relationships. Given that you’re writing for a teenage audience, was this something you felt you had to be careful about?

SF: With a lot of first loves, you think, “Oh, you’re my one and only.” I am mindful of the protagonist realizing, you’re good on your own; you’ll be okay. I was visiting a charter school in Cambridge, and one of the kids was like, “Why didn’t they fight for their life?” And I was like, Well, I think it’s important to realize that that’s life; sometimes you have to make grown-up decisions that are hard—sooner rather than later in some circumstances. I wanted to make the point with Sahar, in the end she’s going to be okay.

Also, people want to read about relationships; they like the escapism. And I like the idea of books about people like me where the protagonist gets the girl, or gets to go on the adventure. Whoever writes the next Harry Potter or the next Percy Jackson: Have that main character be some other identity so kids can see themselves reflected in these really cool stories.

“Not that Harry isn’t great. But if Ron and Hermione had been some other identity—black, Latina, gay—I think that would have made a huge difference.”

MJ: In a Slate essay earlier this year, Ruth Graham makes the case that adults should feel embarrassed about reading literature written for children. Any comments?

SF: Well, she got her name out there. I just feel like the more you read, the better. I don’t see why anyone should be ashamed to read. Of course read the classics, of course read great literature. But you can read other things, too.

MJ: Do you think Graham is jealous of the recent financial success of YA books?

SF: I have no idea. I don’t know her personally. I didn’t get upset by it. I’m just glad if someone reads my stuff.

MJ: A 2012 market survey revealed that 55 percent of YA books are purchased by adults, and 78 percent of those adults said they intended to read the books themselves. Do you have any sense of who is reading yours, and do you care?

SF: I have no idea because I don’t Google myself, I don’t have a website, because I don’t have the head-space for that. I already go nuts thinking about the imaginary audience. I worry about them too much. I don’t want to come across any hate mail. Every sort of horrible thing you could say about me I’ve already thought about when I was closeted, so you don’t have to waste your breath.

MJ: I saw on your publisher’s website that you have this incredible talent for lip syncing.

SF: I am very good at lip syncing, yes! I really love music, but I can’t sing. There was a second grade lip-sync contest, and me and two girls did Paula Abdul’s “Cold Hearted.” Thus begun my love affair with it. My best songs are Michael Jackson or Thelma Houston’s “Don’t Leave Me This Way.” If I could be a drag performer, I would. But I don’t have the physique—or the makeup ability.