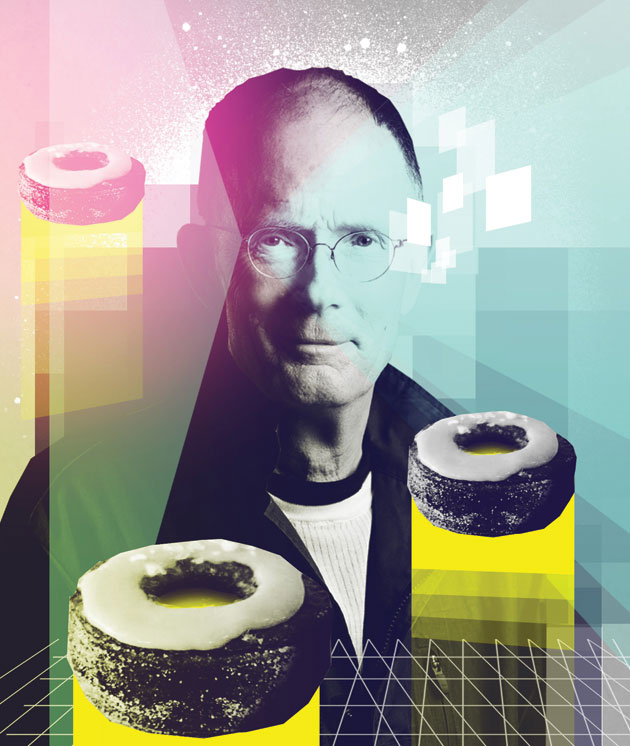 For evidence that the sci-fi future is encroaching on the present, look no further than William Gibson’s latest book, The Peripheral, which opens a mere decade or so from now and includes a cameo for cronuts, those croissant-doughnut hybrids invented last year by a New York City chef. When Gibson’s debut, Neuromancer, exploded onto the sci-fi scene way back in 1984, his vision of “cyberspace” felt dizzyingly distant. (Gibson, now 66, had coined the term in a short story a couple of years earlier.)

Now Neuromancer just seems prescient: a corporate dystopia whose denizens, increasingly engrossed with their technological distractions, live on opposite sides of a cavernous divide between the tech haves and have-nots, their lives circumscribed by conglomerates with insatiable appetites for data. The new book, meanwhile, stars a bunch of downtrodden trailer park residents who get caught up in the deadly games of some time-warping elites from 70 years hence. For this week’s episode of the Inquiring Minds podcast, I reached Gibson at home in suburban Vancouver—he has dual citizenship—to talk about everything from vintage feminist sci-fi to his speed date with Google Glass.

Here’s a condensed version of the interview:

Mother Jones: What made you decide to set The Peripheral in an era so close to our own?

William Gibson: I had written three novels in the mid-to-late ’80s, and they were all set—although the books never say—around 2035. Then I wrote three books in the ’90s, which were set in the just-about-now, so they’ve become alternate history, in a way: Nothing they depict actually happened in 2014 although the real 2014 does feel kind of like those books. I decided that for the actual 21st century, I would write books set basically in the moment: There’s a near future, maybe 10 or 15 years from now, that’s pretty recognizable, but shabbier and less fortunate than ours. And then there’s something in the 22nd century. So I’ve got a dual narrative. 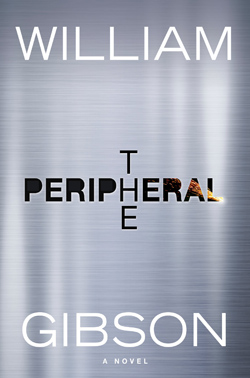 MJ: I’m curious about how a cronut, of all things, made it in there.

WG: I’ve never actually seen one, but last year there were lots of internet stories about people in Manhattan standing in lines around the block to get one of these fabulous hybrid 21st century pastries. So to have it turn up in this near future in a very undistinguished small town somewhere, in the equivalent of Tim Hortons, to me indicates that the trendy hipster cronut has found its way into the mainstream and became this sort of boring, Starbucks pastry that everyone takes for granted.

WG: One of the most difficult things, initially, about writing the book was how to depict the level of telephony that people of my 22nd century take for granted. I want the reader to be kind of, “Oh, wow!” But I don’t want to the characters to notice it, so they can’t ever overtly describe how they’re making the call.

MJ: In an interview 20 years ago, in the early days of mass access to the internet, you said you suspected we were seeing a phenomenon as significant as the birth of cities. Do you still feel that way?

“Now, when I look at the NSA and what it’s evidentially been up to, I can’t see any way that wouldn’t have happened.”

WG: Yeah, I do! Something really changed between then and now in the geography of existence, in the way in which we can have these startlingly intimate and nonhierarchical, unfiltered experiences of things at a distance. Following disturbances like Ferguson on Twitter would have been fantastically weird in 1994.

MJ: You were also optimistic that we would manage to keep the internet free from corporate control. Are you disappointed by recent developments?

MJ: Have you tried Google Glass?

WG: For about 20 seconds [laughs] at an event at the New York Public Library last year. Which helped a lot, actually, because I hadn’t been able to grasp it. And then I had lunch with one of the beta testers, and he had happily incorporated it into his life. But he described a couple of quite alarming episodes of public hostility. Total strangers came up to him and gave him a really hard time. Although that’s just the prototype: When a technology like that goes to market, you can buy a pair of your grandfather’s horn-rimmed spectacles that will do all that and no one will ever know. In The Peripheral, there are people who take it absolutely for granted that everybody they meet has all of that technology embedded in their body—and it’s running all the time.

MJ: Yeah, your characters are kind of walking smartphones.

WG: The internalization of computing is something that has been taken for granted in futurism for a long time, and I just never wanted to go through the considerable amount of trouble to realize it in fiction. But when I did, I eventually forgot about it, which is interesting too.

MJ: There’s a lot of talk in the book about what people are doing to the planet and the climate. What’s your take on the notion that sci-fi exists, in part, to scare us into taking action while we still can?

“If those Deadwood guys got out of the time machine in downtown Los Angeles, they wouldn’t be hopeless hicks. They’d be very dangerous characters.”

WG: As long as its one of the things it does, I’m okay with that. But it does other things as well. For instance, I follow a lot about how we came to automatically think of the inhabitants of the past as having been rubes. One of the things I loved about the series Deadwood was that sense of just how deadly clever people in the 19th century probably really were. If those guys got out of the time machine now in downtown Los Angeles, they wouldn’t be hopeless hicks. They’d be very dangerous characters, simply because they were. And the people in my 22nd century initially assume that anyone they’re dealing with back in 2025 or whenever is just kind of a hick.

MJ: Speaking of which, I read somewhere that you resisted the internet for a long time, only to finally embrace it because of eBay.

WG: The World Wide Web, actually. For years, I had been resisting friends who were telling me to get email, but only because, prior to the web, there was a learning curve involved. I said, “When dogs and children can do it, I’ll be there.” And with the web, dogs and children can do it, and I was instantly there. EBay, in its early incarnation, was the first thing that I found that would get me back on it on a daily basis.

WG: I try not to, actually. I would go on exploratory campaigns and accumulate things in one category. But I have a horror of keeping them. I just want to see a bunch of them, and then give them away or sell them.

MJ: Why a horror?

WG: Collections give me the willies! I love the idea of a private museum, but there’s something about having to complete a collection. It just gets to me like a fingernail on a blackboard. I don’t want to be the person who has to get the last two Lincoln head pennies in the folder. There’s something terribly sad about it. And then when you get them, what do you do?

MJ: In geek culture, everyone is talking about how badly women are portrayed, but your books have always had strong female characters.

WG: I usually wind up with a male lead and a female lead, but not necessarily in the Hollywood style. They’ll interact; it may not be romantically. I think what happened, in the ’70s I was sort of looking for a viable art form. I looked at science fiction, and I was really disappointed with most of it compared to the science fiction that had wowed me as a kid in the ’60s. It felt kind of like Nashville country, like I had grown up on Texas swing and now I’m getting this awful synthetic.

“Mary Shelley may well have invented science fiction. I think she did! But after that it seemed to be a boys’ game.”

MJ: Sci-fi movie fans swear that without Neuromancer, there would have been no Matrix, no Tron, no Ghost in the Shell. Why haven’t we ever seen a Neuromancer movie?

MJ: Are there any particular scenes from the book that you’d love to see onscreen?

WG: When I think of any scene from Neuromancer in terms of how it might be made into a movie, I mainly feel anxiety: What would it look like? Or what if they misunderstood, as seems almost invariably the case, one’s intention? But there are other things I would be curious about. Like how, in the early 21st century, does one depict something like the cyberspace of Neuromancer?

MJ: If you could time-travel, which era would you most want to visit?

WG: If could have any information from our future, I would want to know not what they’re doing but what they think about us. Because what we think about Victorians is nothing like what the Victorians thought about themselves. It would be a nightmare for them. Everything they thought they were, we think is a joke. And everything that we think was cool about them, they weren’t even aware of. I’m sure that the future will view us in exactly that way.

Inquiring Minds is a podcast hosted by neuroscientist and musician Indre Viskontas. This week’s episode was guest-hosted by Tasneem Raja. To catch future shows right when they are released, subscribe to Inquiring Minds via iTunes or RSS. We are also available on Stitcher. You can follow the show on Twitter at @inquiringshow and like us on Facebook. Inquiring Minds was also singled out as one of the “Best of 2013” on iTunes—you can learn more here.