The Curiosity rover landing on Mars was the most thrilling space moment of my lifetime—the seven minutes of terror, the flight engineer’s mohawk, and the unflinchingly honest celebration. (Watch the video above.) My social feed lit up with thousands of messages about Mars. Even my mom called to talk about it. All for a robot.

While the technology for a manned mission is decades away, our imagination is not. Countless science-fiction books and movies take us to the red planet, often with fantastical results. Andy Weir’s novel The Martian is a twist on those tales, offering a near-future account of humanity’s third visit to Mars, with an unfortunate accident stranding an astronaut there. Weir blends real science into the adventure, depicting in exquisite detail how astronaut Mark Watney would survive using engineering and ingenuity. The result is an uplifting tale with a generational hero who unites and captivates people across the world. It’s currently being adapted into a film directed by Ridley Scott and starring Matt Damon.

On this week’s episode of the Inquiring Minds podcast, Weir offers an optimistic take on our chances for a real-life manned Mars trip—largely because of our explorer spirit. “Human beings have an inherent desire to wander around and look at stuff,” says Weir. “There are people who live at the base camp of Everest. There are people who live out in the woods in the middle of Alaska. People will go wherever they feel like going. All they need is access to it. Eventually, our technology will reach a point where it doesn’t cost that much to go into space.“

So how close are we? This week, NASA chief Charles Bolden unveiled an $18.5 billion 2016 budget for the agency, a $500 million increase over 2015. Included in the request was support for additional Mars orbiter missions and an asteroid redirect mission. The ARM, as it’s called, would capture an asteroid into lunar orbit, allowing astronauts to explore and study it. Such an undertaking would mean the development of novel spaceflight technologies and would build the experience necessary for long-range manned missions.

“NASA is firmly on a journey to Mars,” Bolden said. “Make no mistake, this journey will help guide and define our generation.” By the agency’s current estimate, a Mars mission would be on track for the 2030s. The increase to the overall budget is expected to face many hurdles in the Republican-dominated Congress, even though public support for a manned mission to Mars remains very high.

The National Academy of Sciences recently commissioned an independent report on the future of human spaceflight, focusing on a pathway to Mars. Its assessment is more pessimistic than NASA’s, projecting no boots on the ground until closer to 2050. This also comes with an important caveat. “The only pathways that successfully land humans on the surface of Mars require spending to rise above inflation for an extended period,” warns the report. The budget simulation below shows the progression of projects and costs on the way to a Mars surface mission. These conclusions could change dramatically if international cost-sharing increases significantly. 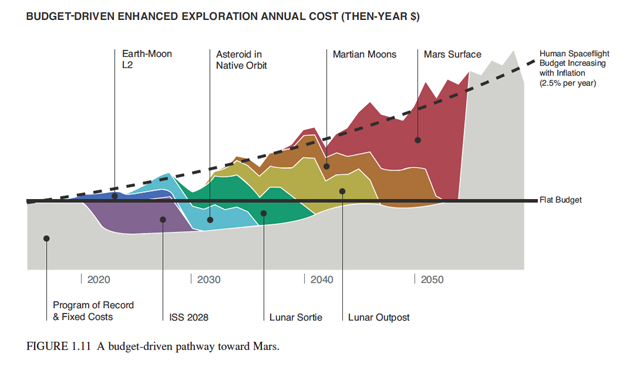 This kind of sustained investment for 30-plus years will require substantial public and political support. That won’t come just from a commitment to pure science research. We also need stories that compel, inspire, and draw our eyes toward the red planet. Maybe that’s where science fiction comes in.

Hard science fiction, which emphasizes scientific accuracy, has reemerged in Hollywood recently. The Martian, Interstellar, and even—to an extent—Gravity have taken millions on a realistic journey to the edges of human spaceflight. But more importantly, they put a human face to the story of that journey in a way scientists simply can’t. And we’ll need to see many, many more of these stories to maintain the public interest.

In the short term, I’ll make due with Matt Damon, Sandra Bullock, and Matthew McConaughey playing astronaut heroes, as long as I know NASA is training the next Mark Watney to finally stand on the surface of Mars.

H/T to Ariel Waldman for pointing me to the National Academy report. To hear my full interview with Weir, click below.