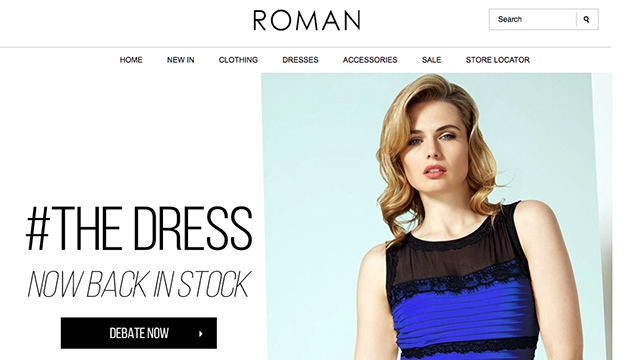 The British retailer of the dress that whipped the internet into a frenzy last week—is it blue and black, or is it gold and white?—has big plans to cash in on its newfound fame. Roman Originals founder Peter Christodoulou told the Washington Post that the dress—which is actually blue and black and available online for about $77—will soon be joined by a gold-and-white version. “We have received so many requests for a white-and-gold version,” he said. “It takes about five months to do such a thing, but we’re not going to disappoint our fans. I expect the white-and-gold dress to come out later this year.” The day after the hoopla broke out, Roman Originals told the Boston Globe that worldwide sales were up 560 percent.

But while almost every possible aspect of the dress insanity has now been dissected, there’s one part of the story that has so far been overlooked: Roman Original’s labor practices record.

A 2007 investigation into Indian garment sweatshops by the British newspaper the Observer found children making clothing for Roman Originals and another UK retailer on the outskirts of New Delhi. While uncovering “a network of mud-bricked sweatshops” used by Indian garment makers, Observer journalists Dan McDougall and Jamie Doward discovered “dozens of children cramped together producing clothes for the UK.” One of those sweatshops, the newspaper reported, was making garments for Roman Originals:

In another sweatshop, The Observer found more children completing a major sub-contracted order for a British firm, the Birmingham-based fashion label Roman Originals, whose upmarket garments are popular purchases in English market towns.

I reached McDougall, who no longer works for the Observer, via Skype. He told me that the discovery of the Roman Originals subcontractor using child labor was inadvertent. “They weren’t a big firm and they weren’t particularly well known at the time,” he said. “From memory they weren’t on our radar at all. We were investigating a major US firm when we came across Roman Originals.” 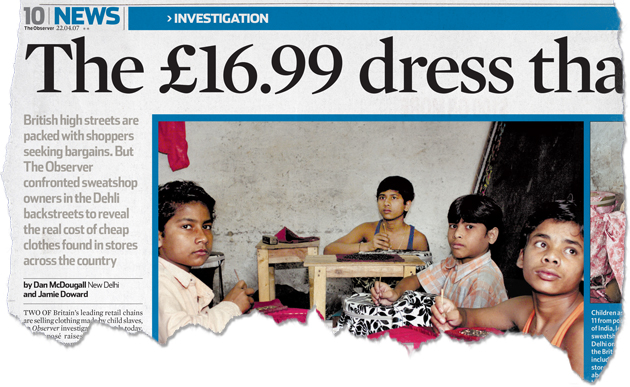 The original investigation, as it appeared in April 2007 in the Observer. According to the Observer, the photo above shows children making clothes for a different clothing company. The Observer

At the time, Roman Originals issued a statement to the Observer saying that it hadn’t previously been aware of the child workers and that it immediately canceled its contract with the supplier:

“We were horrified to see these pictures and immediately launched an investigation into our suppliers,” Roman Originals said in a statement, adding it had canceled its contract immediately. “We had visited the suppliers and were presented with an adult-only workforce and practices that satisfied our standards. It appears that our supplier sub-contracted a portion of the business and this is where the problem occurred.”

I also contacted Roman Originals with a series of questions for this article about where, and by whom, the now-famous dress was made, and what standards the company has in place to prevent child labor. I haven’t received a response. (Update: See below for a response from Roman Originals).

Adrian Fisk, a photojournalist who lived in India for eight years, accompanied McDougall into the maze of slums as they worked on the investigation. Speaking generally about the conditions he observed in various sweatshops while reporting the story, Fisk recalls a grim scene of poverty and deprivation. The reporting team would go into each sweatshop for just minutes at a time to collect photographic evidence of their operations as quickly as they could, knowing their activities could attract unwanted attention. “Generally, the ages probably were averaging about 13, 14, but we did see [children] as young as what we thought to be about seven,” Fisk told me via Skype from London, where he is now based. The children he saw had “grown up too quickly…just not enough fun, not enough happiness,” he said. “You can see it in the eyes, this slightly glazed, deadened look.”

The garment industry in India is notoriously dangerous and plagued by labor problems, as Dana Liebelson detailed in a 2013 Mother Jones feature. In India—like in other garment-producing countries—it’s common for workers to be locked into exploitative conditions until they fulfill contracts.

McDougall, an award-winning human rights journalist who has reported extensively on garment industry practices, says he’s now worried that the global demand for the world’s most famous dress—and for the forthcoming gold-and-white incarnation—will put massive pressure on the firm’s operations outside the United Kingdom to get the garments made quickly.

“There’s no question in my mind that the firm will be all hands to the pumps to cash in on the publicity and turn around as many of these dresses as they possibly can. It’s a marketing dream,” McDougall said. “But what concerns me, from experience looking into many firms, is ordering huge amounts of garments on quick turnaround can place enormous pressure on supply chains. So I hope Roman Originals make a guarantee to everyone interested in ordering the dress that it will be produced in an ethical way.”

McDougall has a challenge for the retailer.

“Perhaps they should go one step further and be transparent on the supply chain around it?” he said. “Rather than make it a poster child for color blindness, why don’t they make the most famous dress in the world…the poster child for fair trade or sustainable production?”

Update: Wednesday, Mar. 4, 2015, 1:15 p.m. EST: Since this story was published, Roman Originals has told Mother Jones that the famous blue-and-black dress was made in Shenzhen, the southern Chinese city near Hong Kong that is one of the biggest manufacturing hubs in Asia. It is “in no way affiliated with the 2007 supplier highlighted in the story from 8 years ago,” said Ian Johnson, the company’s creative manager.

Johnson also stated: “Since that time, 8 years ago, we have reinforced contract terms with suppliers. We will terminate relations with suppliers guilty of certain ‘transgressions’ and those unwilling to make the ‘necessary changes’ to their employment practices if there were any breaches of our contract are uncovered.” Johnson provided a copy of the company’s “ethical standards” and “code of practice,” which states that “Roman Originals will not tolerate the use of child labor by any of its suppliers.”

This article has been revised and updated.