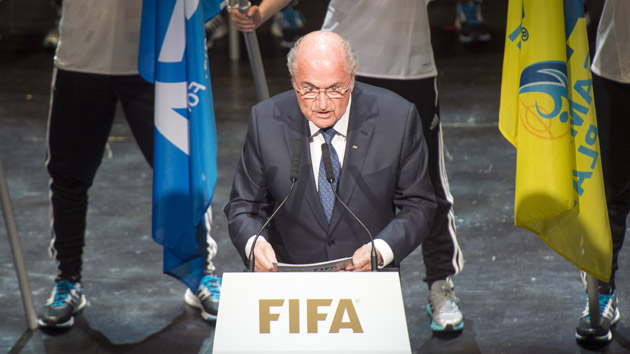 On Friday, as FIFA continues to deal with the corruption-related indictments that have rattled international soccer, president Sepp Blatter will find out whether he will earn a fifth term as the head of the sport’s governing body.

Blatter’s opponent, Prince Ali bin al-Hussein of Jordan, has received newfound support in recent days, including the backing of US Soccer president Sunil Gulati. Meanwhile, with big-name sponsors like Visa calling for “swift and immediate steps to address” the organization’s issues, some critics, including FIFA VP David Gill, have asked for the election’s postponement or for Blatter’s resignation.

We spoke to Alan Tomlinson, a professor at England’s University of Brighton and author of FIFA: The Men, the Myths, and the Money, to understand how FIFA and its frontman have held off critics for years—and where they go from here.

“He can be very hand-shakingly charming, but he can also be a bit ruthless. If you fall out with Blatter and you make allegations within the organization, you don’t seem to last long.”

Alan Tomlinson: He’s not got the charisma of his predecessor, João Havelange, but he has a cunning way of operating. He has a mind and charm to him. He can be very hand-shakingly charming, but he can also be a bit ruthless. If you fall out with Blatter and you make allegations within the organization, you don’t seem to last long. It might be difficult for you to get another job, though you might have had a very, very good payoff to perhaps stay silent. So Sepp Blatter has been creating more dilemmas by the way that he operates and the way that he monopolizes the administration. He’s there all the time.

In 2002, FIFA was close to bankrupt, but the cycles of sponsorship and broadcasting since then has put it in something like the $5 billion in revenue category. But [Blatter’s] not liked—I’m not saying Havelange was liked, but he had authentic charisma. Blatter’s a much more cunning operative, but I also think that leads to vulnerabilities. There are so many cases where Blatter has been close to directly involved in forms of inappropriate deal-making or maladministration. But there are potentially an expanded number of former allies who could become whistleblowers.

MJ: How has Blatter survived these allegations of corruption in the past?

AT: One way is a public way, particularly since FIFA was persuaded to set up an ethics committee: “We have these independent inquiries. We do read these reports. We do act upon them. So we do tell people they’re not welcome in the world of football.” So they get suspended for a while, investigated, and suspended for life. He uses the procedures that he’s been in a way forced to put in place to deal with revelations that emerge. He can then say: “We are on a mission to clean this up. Yeah, we don’t want people like that in the world of sport.”

Another way that you can deflect all forms of not just critique but challenge is, of course, destroying the evidence. At certain times, doors have been locked. Papers have been shredded. In the electronic age, who knows quite who is in control of what the knowledge base is. So behind the huge figures that get audited and passed by reputable bodies like KPMG or PricewaterhouseCoopers, there’s probably a trail of destruction of evidence, so you can’t find the stuff.

MJ: How have the indictments changed the game—and Blatter’s prospects for reelection?

TA: The sponsors are expressing serious doubts, but they do that regularly. They usually get calmed down, they get satisfied when some people get suspended. So in previous, comparable cases, the FIFA ethics committee—which has only existed since 2004—would just suspend the people, and Blatter could say, “We’re cleaning out the stables.” He’s not able to say that when there’s a body like the US justice system pursuing criminal charges on this scale.

“Tomorrow, within the congress hall, big FIFA people will show that combination of loyalty and fear, which Blatter is able to cultivate. I think he will move into his fifth term.”

I think what will happen tomorrow, within the congress hall, is that big FIFA people will show that combination of loyalty and fear, which Blatter is able to cultivate. I think he will, unless an entire further time bomb happens [beforehand], he will move into his fifth term. But it won’t be quite as smooth a term. He won’t be able to silence the critics quite as much. He won’t be able to satisfy the nervous partners quite as easily unless he starts to generate some wider debate about how FIFA itself works and what are the compositions of the committees.

MJ: You seem certain about his victory.

TA: Yeah, certain as one can feel, but who knows what time bomb may suddenly appear. [UEFA President Michel] Platini is directly asking him to stand down, but he’s got the president of the Russian federation saying, “We support this man.” This is a big level of Cold War politics with FIFA in the middle of it in some ways.

So he’s got a lot of supporters, and a lot of them, in the context of a place like FIFA, don’t have to speak out. They’ll just stay quietly there, knowing that if the whole thing doesn’t crumble, there’s still a lot in it for them in terms of their personal status and the untaxed pay bonuses or expenses that they receive for traveling the world, staying in the world’s top hotels, and talking now and then a little bit about football.