By international agreement, only indigenous peoples may hunt the world’s remaining polar bears. In Canada, subsistence hunting permits are issued by lottery; hunters keep the meat and can earn more than $10,000 from the pelt, like this one harvested in Arviat, an Inuit village on the western shore of Hudson Bay. Tags may also be sold to non-indigenous trophy hunters. Local hunters disagree with conservationists on whether the hunt harms the already vulnerable species’ numbers. Yet amid concerns that Canada might ban the trade in skins, last year hunters in the Nunavut region agreed to cut their annual quota from 60 to 45 polar bears.
All photos by Ed Ou/Reportage by Getty Images 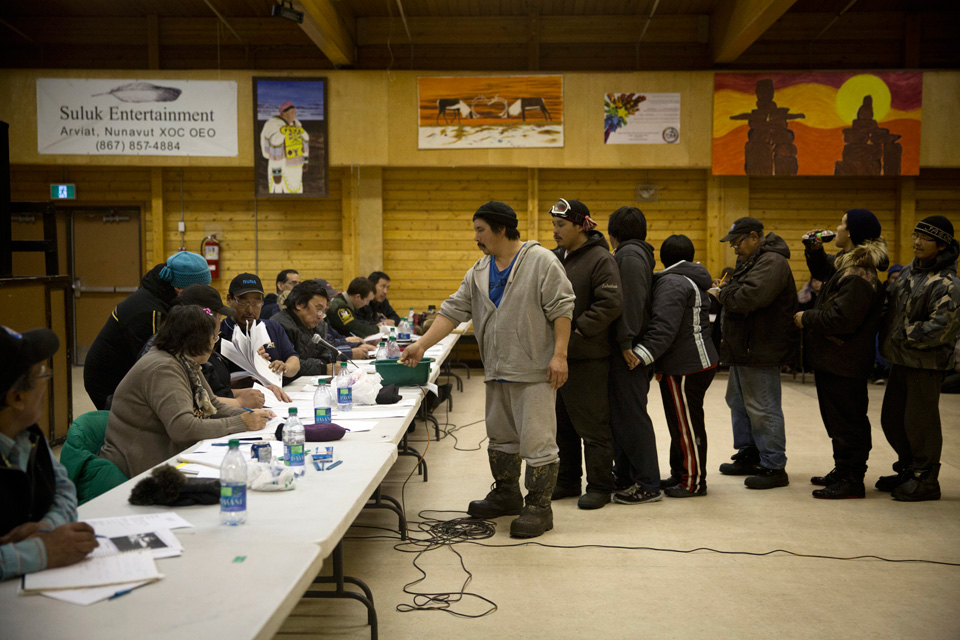 At the annual Hunters and Trappers Association town hall meeting, hunters line up to draw names out of a box for the opportunity to hunt a polar bear in Arviat, Canada. Polar bear hunting in Nunavut works on a lottery tag system for eligible Inuit hunters. Ten names are randomly drawn out of a box; the chosen have 48 hours to successfully kill a polar bear—if not, their tag goes to another hunter. Listing the polar bear as a threatened species, the United States and many environmental groups have pushed for a global ban on the commercial trade of their fur, meat, and body parts. The Canadian government opposes this, on behalf of the Inuit. 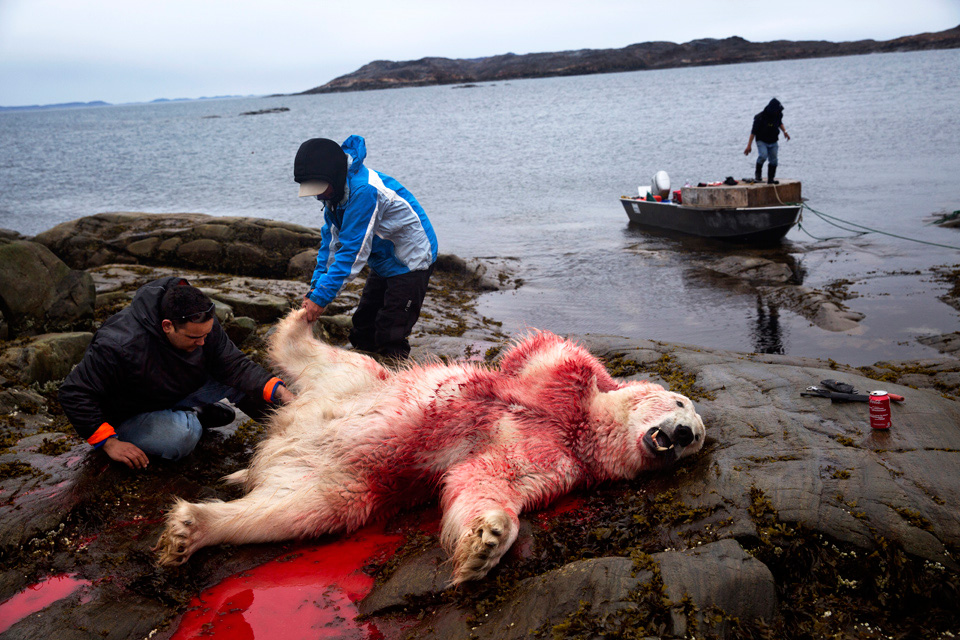 Inuit hunters Leesee Papatsie (right)* and Peterloosie Ninna Papatsie stand over the body of a polar bear they shot to death moments earlier in Baffin Island, Canada. The Inuit in Canada have traditionally hunted polar bears for subsistence and income to provide for their families, given the high cost of living in isolated regions of northern Canada, and continue to do so to this day with the blessing of the government. 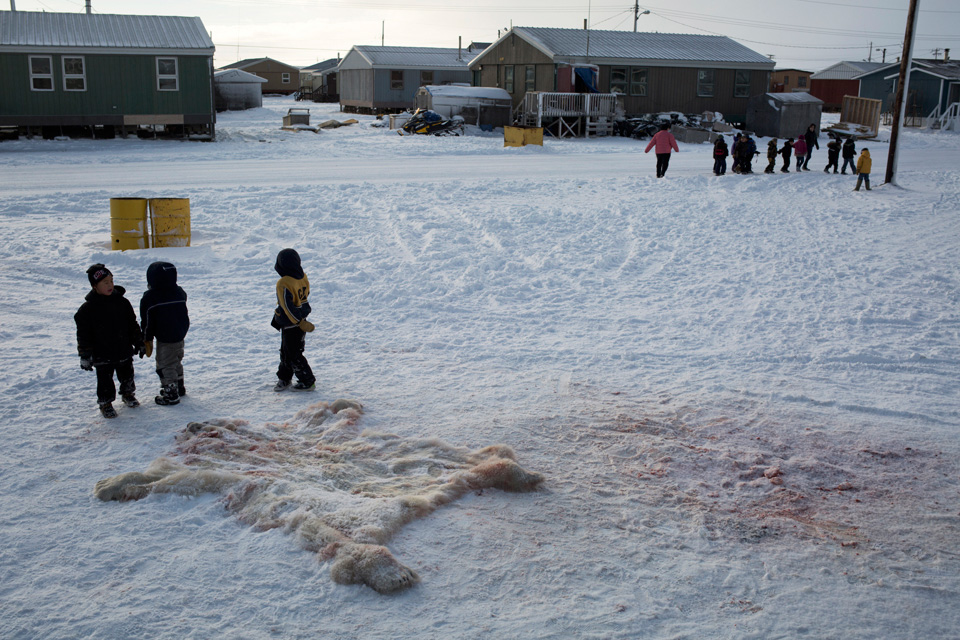 School children investigate a polar bear pelt lying in the snow. A single pelt can sell for more than $10,000—economic salvation for many impoverished families. 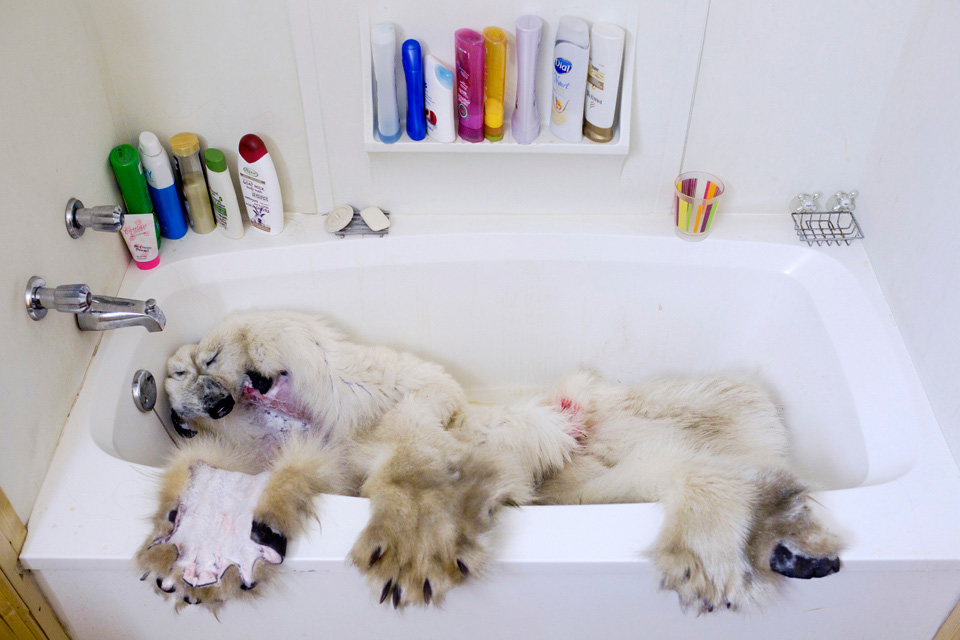 The frozen pelt of a polar bear, shot days earlier, thaws in a bathtub. 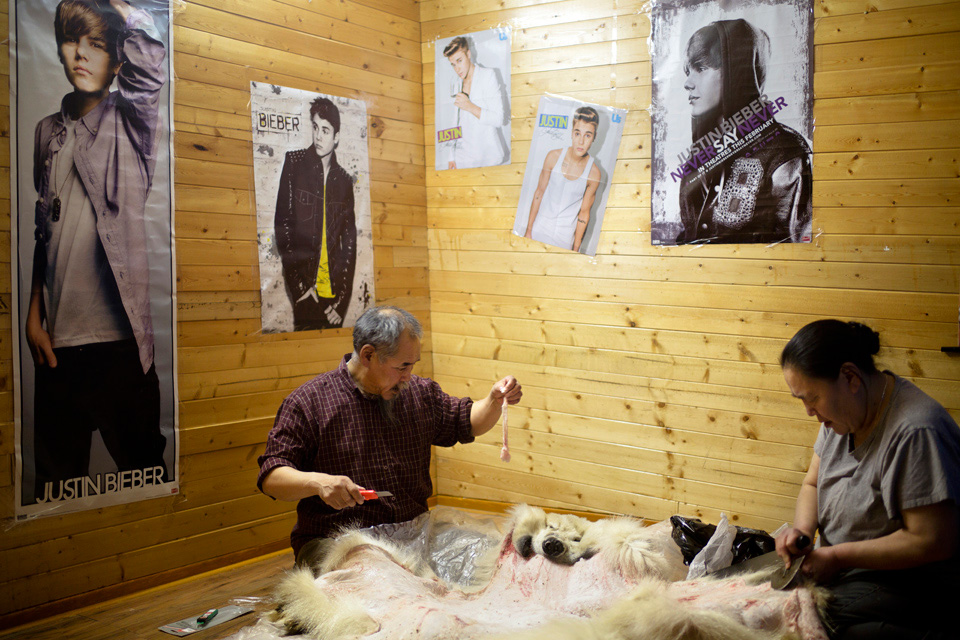 Inuit elders Mark and Angie Eetak cut off the fat from the pelt of a polar bear that was shot days earlier. 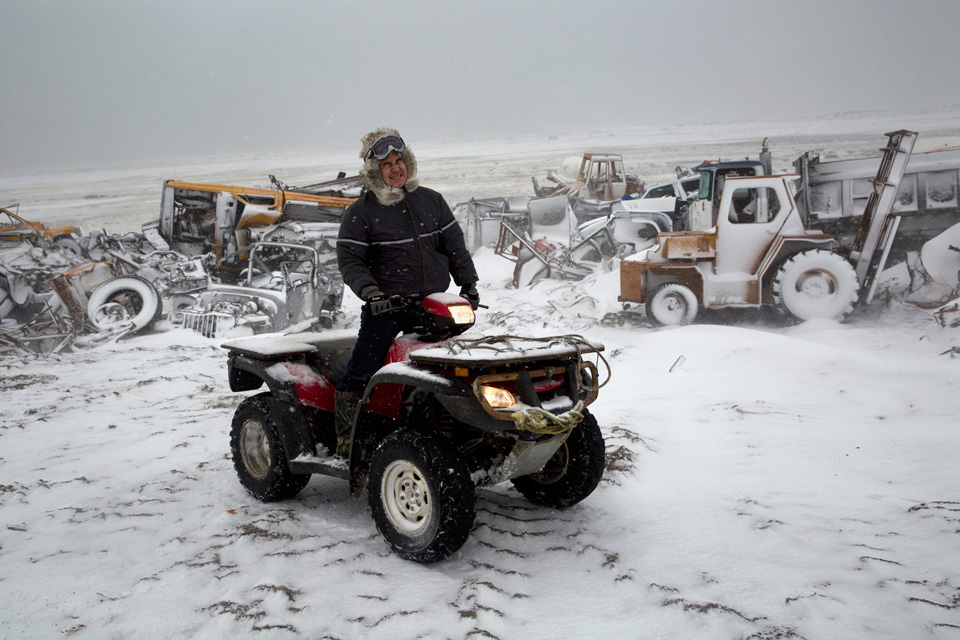 Brian Tagalik fights the wind and snow while riding on an ATV near the town scrap metal dump. Born in the Arctic and schooled in the south of Canada, Brian feels lost between the modern way of life and the dying traditions of his ancestors—at the crossroads of two divergent realities, but unable to fully realize either. As much as Brian tries to lift himself out of the cycle of trauma, he turns to alcohol and drugs to “numb the pain of our past.” 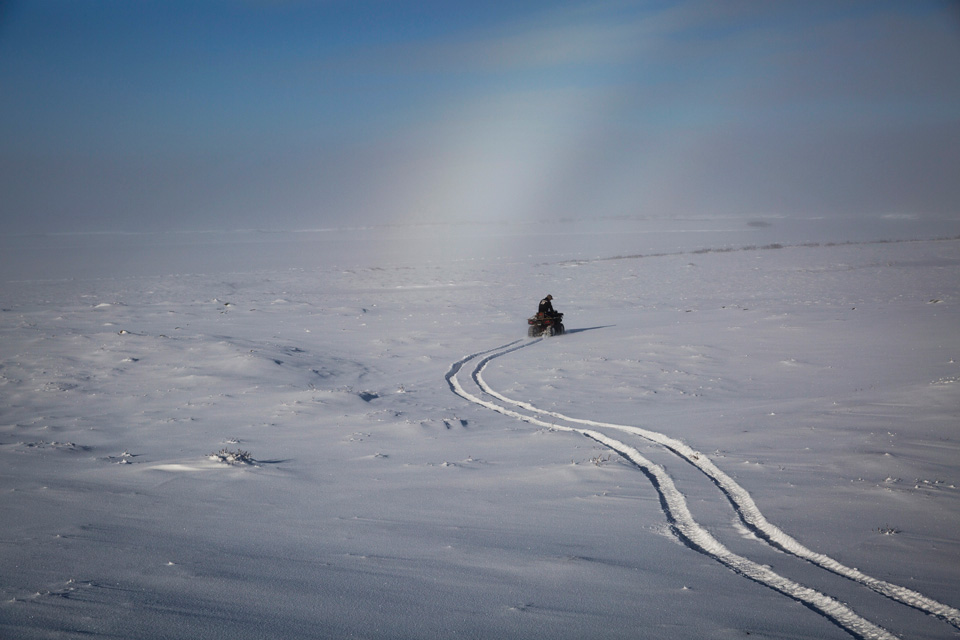 A hunter searching for game speeds off near Arviat, Canada. The Inuit have traditionally depended on hunting to provide food, shelter, and warmth for their families in the harsh arctic environment. As communities in Nunavut are completely cut off from the rest of Canada by road, food and supplies are shipped at an extremely high cost by boat and plane, leading to exorbitant prices at the grocery stores. 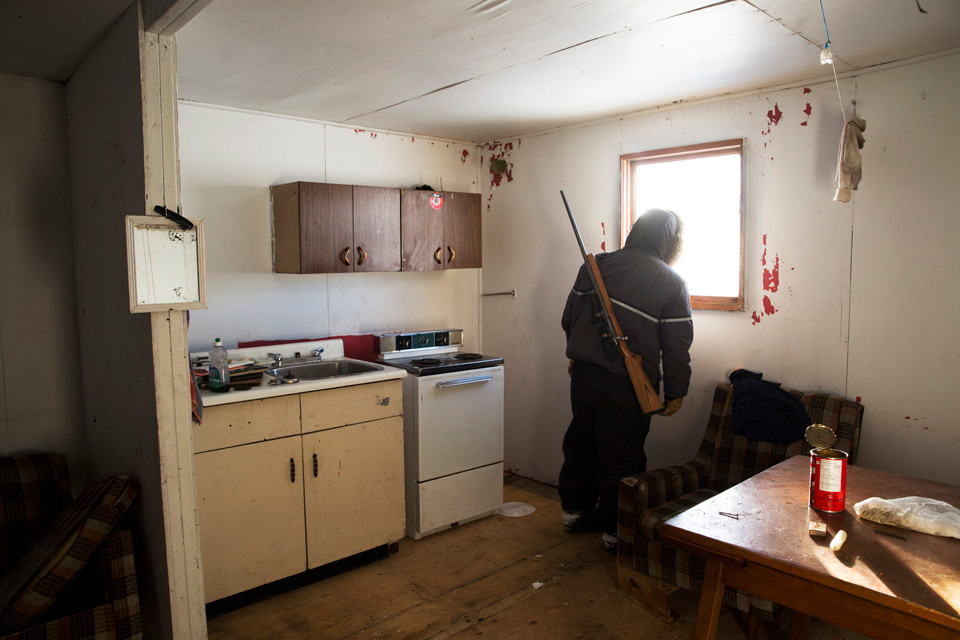 Brian Tagalik peers out the window of a house during a hunting trip. “Being out on the land is almost as serene as it can get,” he says. “It is one of the few places where I can forget there is anything happening in this world. Where I can tell myself, this is who I once was—this is the lifestyle I once lived. It gives me the feeling of being a man, providing for my family the best way possible. Hunting is a very soothing thing for the soul.” 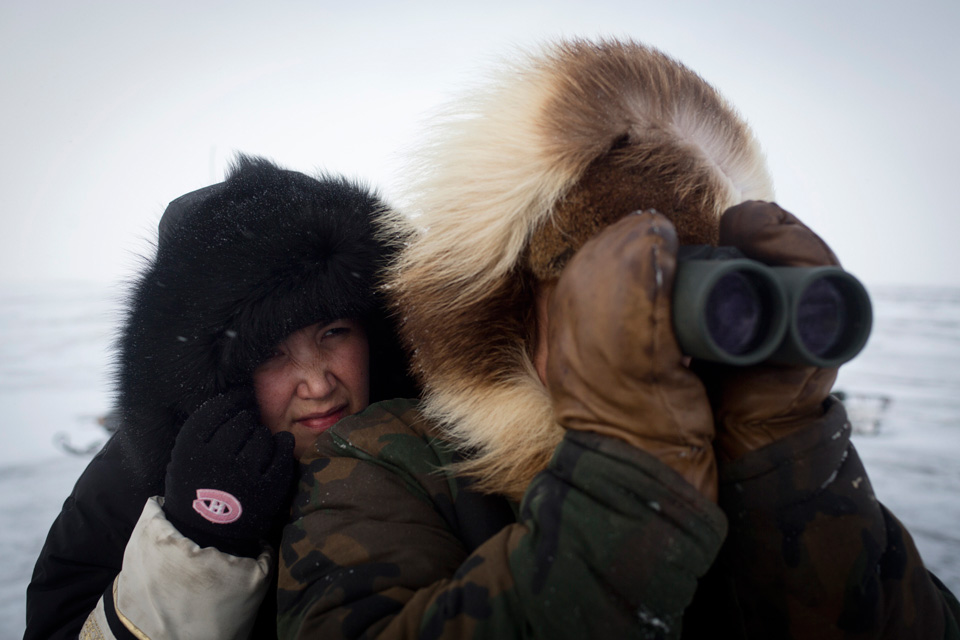 Jamie Kablutsiak (right) and his wife, Norma Jean Kablutsiak, look at the horizon in search of polar bears to shoot in Arviat, Canada. Norma Jean had her name drawn the night before, and was given a tag to hunt a polar bear. 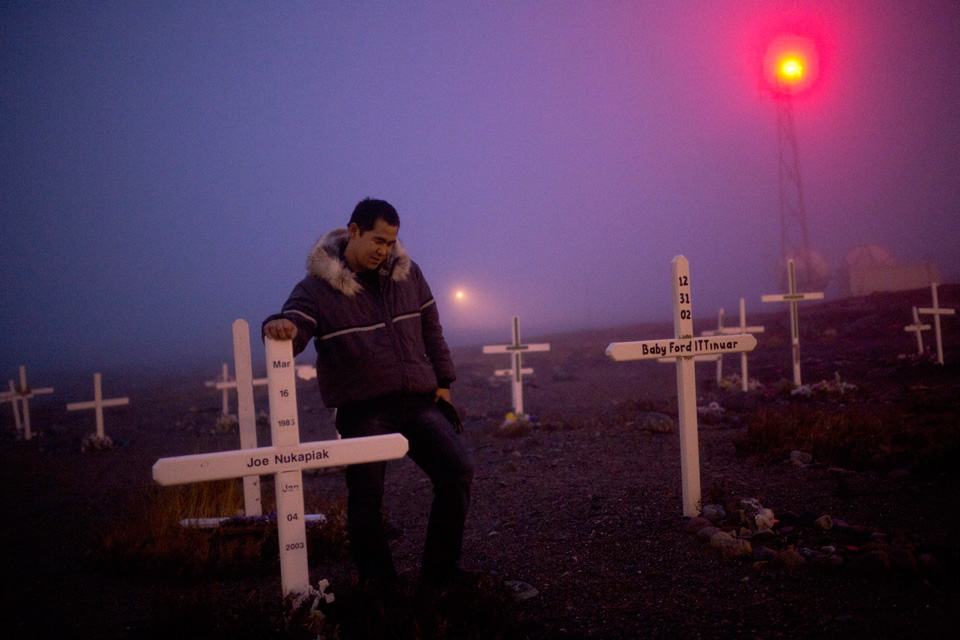 Brian Tagalik stands over the grave of Joe Nukapiak, who killed himself when he was 17, in Rankin Inlet, Canada. They grew up together, and went to the same elementary school. Brian says he saw Joe the night he died. As Brian walks throughout the cemetery, he points out the graves of almost a dozen of his friends who died of suicide. According to Health Canada, the incidences of suicide in Inuit youth are among the highest in the world, 11 times the national average. 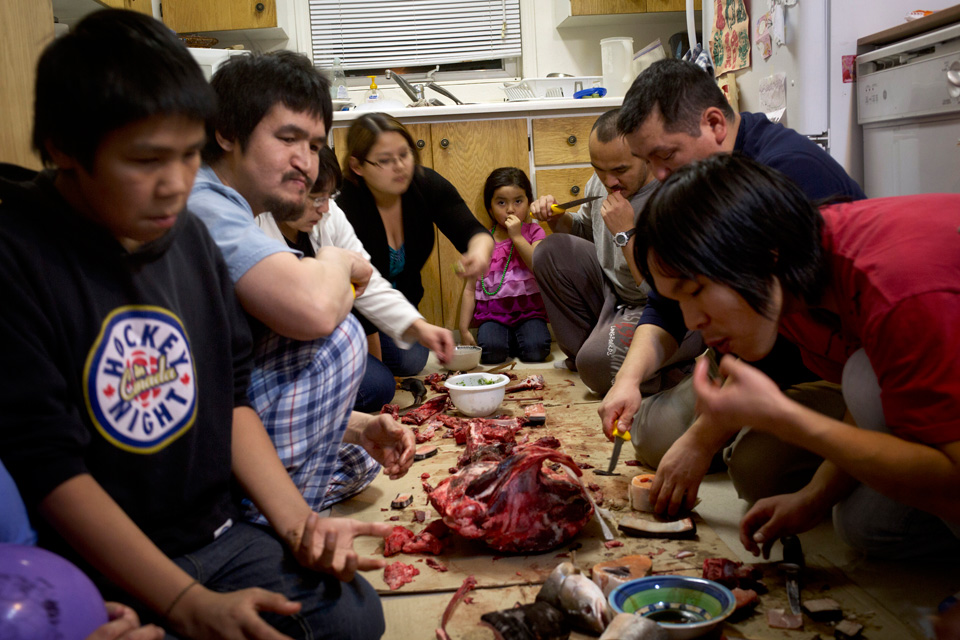 People gather around the floor of a kitchen during a feast of hunted foods in Pangnirtung, Canada. 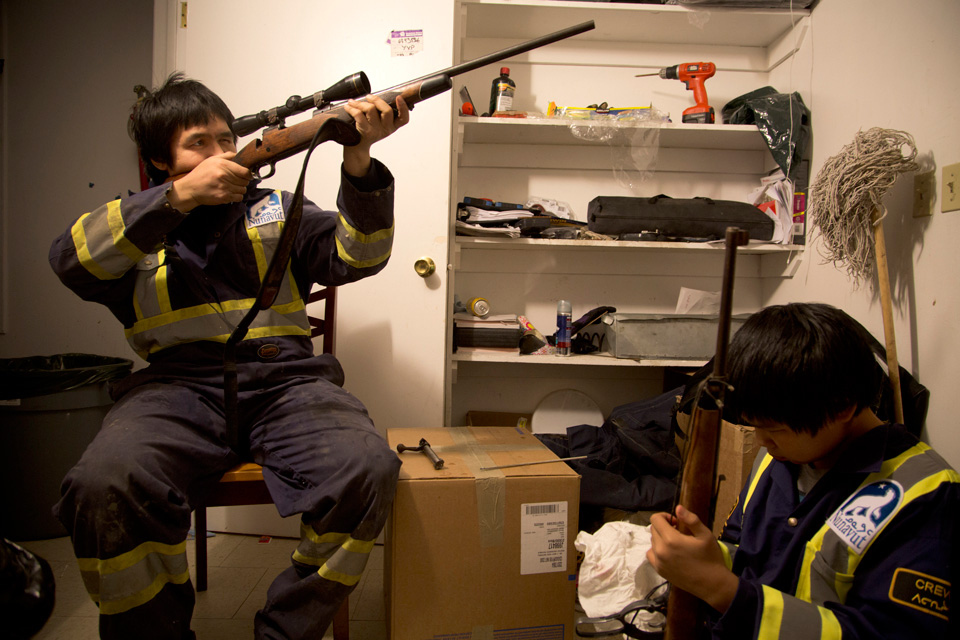 Upon returning from a hunting trip, Levi Ishlutak (left) and his 12-year-old son Paul, clean their rifles at home in Pangnirtung, Canada. They are wearing jumpsuits to prevent grease from getting into their clothing. 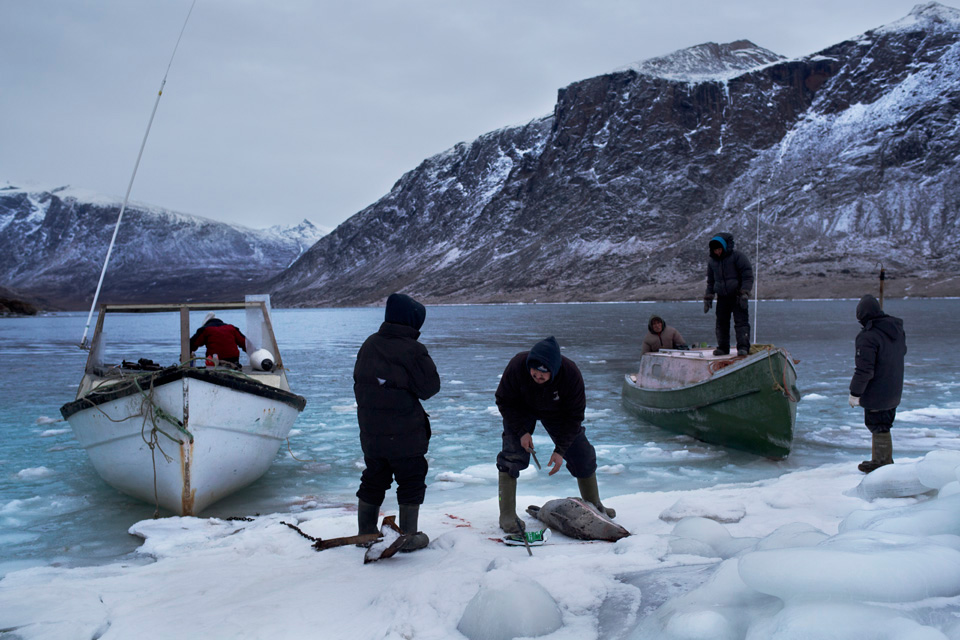 During a hunting trip, Levi Ishlutak (second from left) cuts up meat from a seal shot moments earlier in Pangnirtung, Canada. With so many children to feed and support, Levi often struggles to put food on the table, living day to day and paycheck to paycheck. 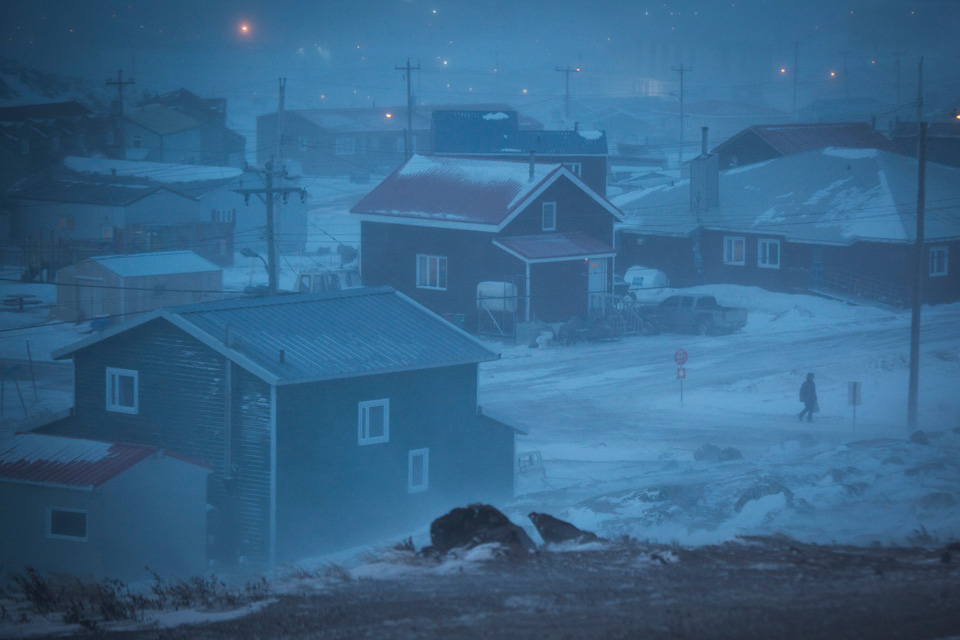 During a blizzard, a man walks down the road in Iqaluit, Canada. Formerly named Frobisher Bay, Iqaluit was founded as an American air base meant as a transit point to refuel military planes bound for Europe during World War II. It now serves as the administrative capital of the newly founded territory of Nunavut in northern Canada. With a population of less than 7,000, it is the least populated capital of any province or territory in Canada.