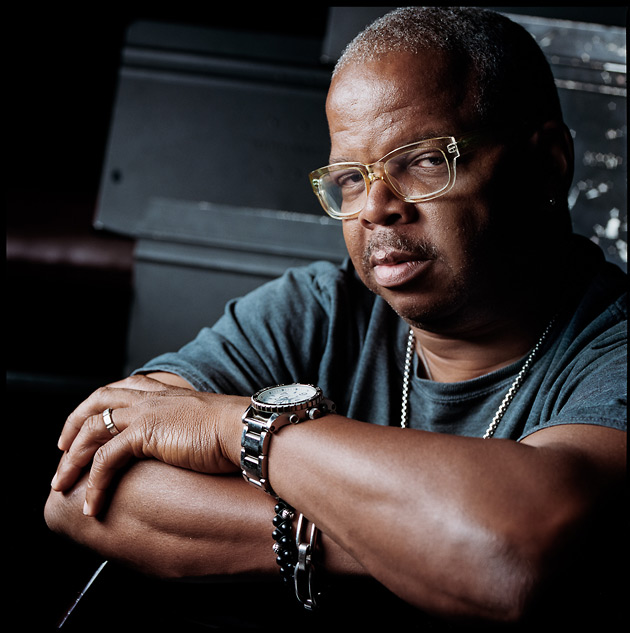 Fifty-three year-old New Orleans-born trumpeter and composer Terence Blanchard is a heavyweight among his musical peers, and not only for his passion as an amateur boxer. As a bandleader, he has released 20 albums over the past three decades. A prolific composer for film and television—he created the soundtracks for every Spike Lee film since Jungle Fever—Blanchard has a gift for constructing narrative and nuanced mood in his music.

His new album Breathless, released this past May, is his first with the electric E-Collective band and features vocal contributions from Maroon 5’s PJ Morton and Blanchard’s son JRei Oliver.

“It’s hard with my background to turn a blind eye to what’s been happening.”

With the new band and the thematic connection to Eric Garner’s death, you’d think the album would be full of raw nerves and anger.  But instead, Blanchard has created a suite of instrumentals, songs, and spoken word meditations that invite reflection on finding the strength and peace to heal and move forward. He challenges listeners to be “breathless from exerting your free will, breathless from doing good, breathless from blowing your own sweet solo.”

I spoke with Blanchard at the Jazz Standard in New York, and later on the phone from his home in New Orleans.

Mother Jones: Was your label, Blue Note, supportive about changing directions with this album?

Terence Blanchard: We just lost one of the greatest music executives of my time, Bruce Lundvall. The last time I saw him we were right here, taking a picture together. He was the type of dude that whenever I saw him, he always talked about music.  It wasn’t ever, “I can do this for you, blah, blah, blah.” I always thought it would be great to be on a label with a guy like that because not only does he appreciate the music but I could also learn from him.  When we finally got the chance to work together, he said, “I want you to be you.”

Now we have Don Was, who is very much like Bruce in that regard. When I first had the conversation with Don about the record he said, “Great, but bring it up to where you are, don’t dumb it down.”  It was great to hear that.

MJ: Is composing for film a different process for you than making an album?

TB: When I first started it gave me headaches: I’d be working on a jazz thing then my brain would have to click out of that mode and then go work on the film. Wayne Shorter talks about your life being one continuous song with different variations, moods, textures, and color. That’s the way it is right now for me: Both inform each other in a way that I can see more clearly now. The film side has opened my eyes to story telling, context, and all of those issues. You’d think that working in film is limiting, but it’s actually liberating because it shows you that within the context of the story there are still a million permutations.

MJ: How did the topical side to Breathless evolve?

TB: Breathless didn’t start out to be a statement record, it started out as something we wanted to have fun with just playing music. But it’s hard with my background to turn a blind eye to what’s been happening.

MJ: Given that many of the people who have died in these police incidents have been young people, what did it mean to you to have your son involved in the record?

“What got me was the seven patrol cars. That says a lot about the mentality going on in law enforcement.”

TB: It wasn’t something I thought about initially, but once it dawned on me, it made more sense. My son had had an incident of mistaken identity. A woman claimed that somebody had broken into her house, and she described the suspect as a black guy with dreads. My son had been walking by that house at that time. Her husband saw my son, followed him all the way to school and called 911. Seven patrol calls pulled up to the school. Seven. They handcuffed my son in class, walked him out and put him and put him in a patrol car. One of the cops there was a guy I grew up with, literally our back yards were connected. He saw my son sitting in the back of a patrol car and said, “I know this kid, he didn’t do this.” When they brought my son back to the woman’s house, her story fell apart. What got me was the seven patrol cars. That says a lot about the mentality going on in law enforcement. The thing I keep saying: It’s not going to stop until those police who are responsible go to jail.

MJ: My guess is that if the police prosecute their own, it undermines their power and control, and they’re afraid.

TB: I believe it to be true. That describes a whole host of problems with insecurity. You see it all the time.

I’ve been boxing for 20 years. When you start boxing and you get in the ring, the first thing you learn is to respect the person in front of you. That carries over into my daily life. I don’t care who it is or what they look like.

I’m going to tell you this, and this is probably going to get me in trouble, but I’ve seen some cops come to the boxing gym and not stay. Some of these dudes, they have an attitude problem; they come to the gym for the wrong reasons. And I think, if you have that problem here, what’s going to happen out on the street with your badge and a gun?

That’s the part we’re not dealing with. They are supposed to be the professionals. I’ve accepted that there are things that come with being a public figure as a musician. What’s crazy is the power they want to exert over everyday people when the side of the car says, “protect and serve.” To serve is something noble, something distinguished and honorable.

MJ: Your song “See Me As I Am” brings up the issue about perception and race.

TB: I hate using the term “as a black man,” but in my experience, I’ve gotten to the point when I meet people I feel that tension, I can see their minds change as I’m talking to them, I can see their thoughts about who I am change as we’re having a conversation. That’s normal in some ways for all interactions, but you call always tell when a first impression is mostly negative. Forget what you see on the news and television. Try to come and experience who I really am.

What gives me hope is when I look at my kids and their friends, I see that as an indication of where we’re going. My daughter was talking to me the other day about a girl friend of hers who is “gender mobile.” And I was like, “What’s that?” She says, “Sometimes she dresses like a boy, sometimes like a girl.” And she was cool with that.  Race, ethnicity, sexual orientation— nothing matters to these kids, it’s beautiful.

“Anger is not necessarily a reaction; it can be something that you choose to allow.”

MJ: Despite the real and justified anger about these incidents, the album seems to focus more on internal feelings and preservation of the self.

TB: At the end of the day that’s all we have: self-preservation. Our history has been to rely on our faith in times of trouble and distress. That’s been the place where we have found our salvation, and our rejuvenation.

MJ: As expressed in the song “Samadhi,” what does the practice of meditation do for you personally and creatively?

TB: It’s done so many things. It’s built up my awareness, it’s allowed me to understand that being selfless doesn’t mean powerless. That’s the reason I have “Confident Selflessness” on the album too, because you need to be confident in your aspirations, but you also need to be selfless in how you serve society and other people. It has allowed me to choose whether to be angry or not. Anger is not necessarily a reaction; it can be something that you choose to allow. When you start to see the bigger picture of things, you can respond accordingly. It’s brought me a lot of peace.  It allows your mind to slow down, it allows your thoughts to slow down, and it allows your soul to strengthen itself. One of the things I chant for is peace in this country.

“Boy if they could see me now, with these dudes talking about The Young and the Restless!”

MJ: Is there anything else to staying happy and healthy as a musician?

TB: A lot of it is just peace and solitude. You need that to rejuvenate yourself and rebuild your brain and your spirit. People don’t understand how much energy it takes to do this, not just physically but mentally. I did a gig with Ron Carter and on the way back to the hotel, the driver was playing some music. Ron said, “Excuse me, could you please just turn that off? I’ve been playing music all night and I have to resolve all this shit that I played in my mind.” I get his point.

Actually, do you know what most musicians used to do?  They’ll never admit it, but before the Internet—it was soap operas. There were a lot of them, and they would have discussions about this stuff on the road. I wasn’t into them but I would think to myself, “Boy if they could see me now, with these dudes talking about The Young and the Restless!”

MJ: Are you going to name names?

TB: Naww, I can’t do that! For me it used to be Jerry Springer, because when you watch Jerry Springer you immediately forget about whatever you were doing.

This profile is part of In Close Contact, an independent documentary project on music, musicians, and creativity.