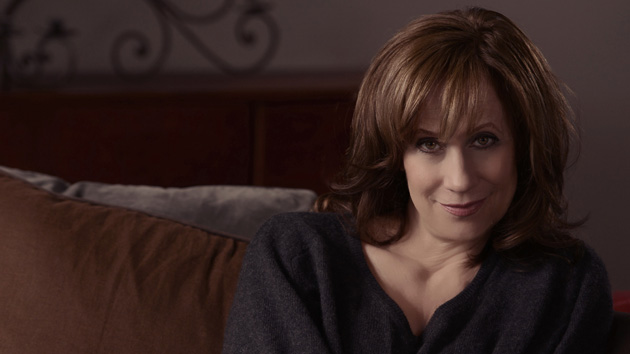 Leave it to Daily Show co-creator and former head writer Lizz Winstead to give Tinder a feminist makeover. Hinder, her new app that parodies the popular hookup platform, is both funny and, you know, not funny. It’s simple enough: Swipe right or left on pols like Mike Huckabee and Ted Cruz who want to restrict your reproductive rights by defunding Planned Parenthood or otherwise limiting your access to birth control or a safe, legal abortion. The app lets you search for politicians by state “so you can see your local douchebags,” says comedian Winstead, who developed Hinder in conjunction with Lady Parts Justice, her reproductive rights advocacy group (slogan: “Kicking politicians out of vaginas since 2012”).

In the video below, she unveils the app to a live audience, doing her best Steve Jobs impression in the process. “It’s like a hookup app,” she says, “but it focuses on all the sexist assholes tirelessly trying to crawl up into your vagina.” After urging the audience to download Hinder, she adds, “It’s simple: Uterus begins with you.” I caught up with Winstead to talk about why Hinder almost didn’t make it into the App Store—and why Carly Fiorina desperately needs to be fact-checked.

Mother Jones: Hinder went up in the App Store this week, but not without some drama. Apple initially rejected it, claiming it violated the company’s prohibition on defamatory, offensive, or mean-spirited content.

“I was like, ‘Are you fucking kidding me?’ I was really not interested in proving to Apple that I’m a political satirist.”

Lizz Winstead: We got rejected under the guise that our content was offensive, taking on politicians and saying mean things about the government. But there’s an exemption [in Apple’s guidelines] for professional comedians and political satirists. I was like, “Are you fucking kidding me?” I was really not interested in proving to Apple that I’m a political satirist—it’s out in the world, just ask anyone. So we had an interview scheduled with the Huffington Post, and I told the woman that we got rejected and she wrote this article, and it started blowing up. By the end of the day, Apple had approved the app. And now we’re going to do an Android one as well.

MJ: Why did you call it Hinder?

LW: It’s about people who are hindering access to reproductive justice. And since it’s birth control- and reproductive rights-centric, we thought, “Why not ape a traditional hookup app?” So people who’d use a hookup app would think it’s fun, and then they can understand that if you’re trying to go out and hook up with some people, there are these people who are trying to make it not safe for you to do that. They want to take away all the stuff you probably do responsibly, like making sure that you have birth control, or that if you have an unintended pregnancy you need to terminate for whatever reason, you can.

MJ: What kind of information does Hinder give people?

LW: It’s similar to Tinder in the sense that you can scroll and see—you can read about anti-autonomy, women-hating people. If you click on the info [icon], you can read three facts about each person, and there’s a link to an article about that person. It’s a good way to do breaking news. We can add a person to the app and put it out there: This person said this today. It’s a nice wake-up call. You can see how many people are part of this anti-choice machine.

“We use their own words—verbatim quotes, their voting records…I’m just stating the facts.”

MJ: So have any of the politicians expressed anger about how you’re portraying them?

LW: The app just came out. I’m sure the ones who look at it will have feelings about it. The interesting thing is that we use their own words—statements they’ve made, verbatim quotes, their voting records. You can get mad all you want, but I’m just stating the facts. You can probably make a horrible app about all the things I’ve said, and you know, what am I gonna do? I’ve had right-wing, anti-choice websites write about me, and they think they’re doing a “gotcha” thing—like she believes this and she’s come out and said this, and here are a list of things she’s done—and I’ve practically wanted to use it as a press release because it’s like, “Yep! I believe all that.”

MJ: What are your thoughts about the recent attacks on Planned Parenthood?

“There need to be people out there who are calling out the lies in all different ways.”

LW: They’ve tried constantly to go undercover and attack Planned Parenthood, and this series of videos revealed how little people know about simple pathology, about what one does when one is doing research on human tissue. To manipulate emotions just by saying the word “baby” over and over, when we’re not talking about babies, shows just how little people want to factor in science, and how hungry they are to define this organization as a monstrous baby-killing machine.

The reason it hasn’t taken on the traction they hoped it would is because—while it hits true believers in the gut and riles them up—the fact of the matter is that so many people have visited a Planned Parenthood in their lifetimes, and they know that’s not true. Over and over, it’s the lack of information: When you say there are plenty of health centers all over the country that can do this, that’s just not true. They don’t have the state-of-the-art equipment; they can’t facilitate the needs of the community. To have Carly Fiorina’s statement at the debates about the Planned Parenthood videos, a blatant lie, just lay there and elevate her in the polls, that’s really depressing to me. There need to be people out there who are calling out the lies in all different ways. So here we are.