On a midsummer afternoon in 2013, in the wilds of southern Utah, Ben Masters jumped off his horse, tied it to a tree, and watched his three friends ride off into the mountains in the wrong direction. It had been a tough day. They’d already been forced to turn back after trying to scale the Wasatch Plateau, snow-choked at 10,500 feet above sea level; the horses struggled and postholed through thick snowdrifts, and the group could go no farther. 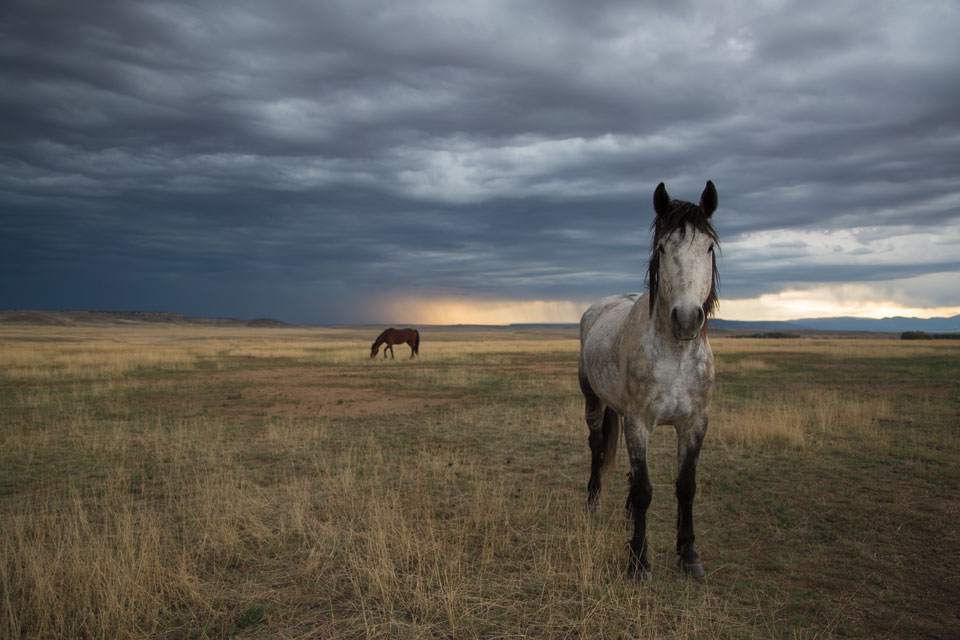 Two of the 16 mustangs Ben Masters and his pals adopted from BLM. Unbranded/Texas A&M University Press

The setback had wasted precious hours. The four men needed to find, before nightfall, a camp with grass for their 16 horses—including pack animals—to graze. That already looked uncertain. Then, as they made their down from the snowy pass, the mustangs were startled by the thrum of engines from some off-road vehicles in the area. They began to spook and bolt, one after another. Left with just five horses, the friends threw together a hasty plan: Masters would stay put while the others attempted to chase down the runaways.

At that point, the men were two months into a journey that would take them through 3,000 miles of America’s backcountry, primarily public lands, from Mexico to Canada. They still had a long way to go. “What the hell?” Masters remembers thinking after 48 hours of waiting. “This whole thing is going to unravel.” 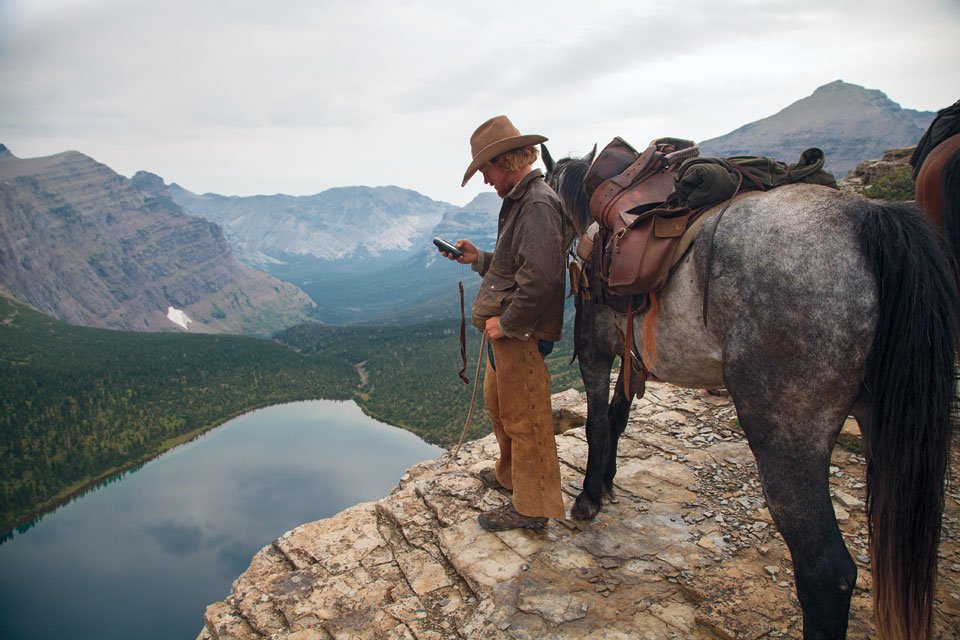 “That was the lowest point of the journey for me,” he told me, “just waiting, twiddling my thumbs. It’s funny now, but when you’ve put that much time and energy into something and you think the whole trip is being undone—the horses have run off and you’re never going to find them again—it was scary.”

Their epic undertaking, the subject of a photo book and a new documentary film opening this week, was born out of a desire for adventure and freedom, at least for a little while, from societal obligations. Masters had been on one long-distance horse trip before. In 2010, he and two friends decided over tequila to take a semester off college and ride through the state of Colorado. That trip ended with sore legs, wet clothes, cold fingers, empty bellies, and a decision to never endure that kind of suffering again. But just three weeks later, Masters started planning for his next adventure. 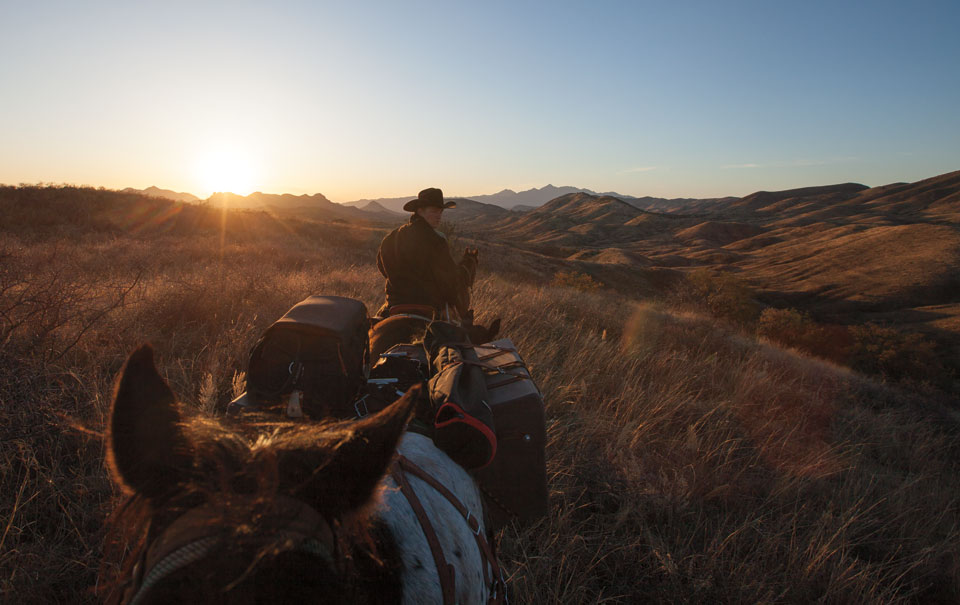 This time, one state wasn’t enough. Masters wanted to ride through the longest stretch of contiguous backcountry remaining in America, and he wanted to film it. He found a crew headed by adventure filmmaker Phillip Baribeau and recruited three other friends who knew their way around a horse. These included Jonny Fitzsimons, who grew up on a cattle ranch Thomas Glover, who had once worked at a dude ranch, and Masters’ childhood pal Ben Thamer.

As he’d done the first time around, Masters arranged to adopt a team of unwanted wild mustangs from the Bureau of Land Management (BLM), which manages more than 50,000 wild horses and burros on public lands in the West. With a mustang population that can double every four years, the BLM offers thousands of horses for sale or adoption, but the demand rarely meets the supply. “I wanted to show that mustangs aren’t the worthless beasts that are currently wasting away in holding pens but are excellent, usable stock,” Masters writes in the book Unbranded: Four Men and Sixteen Mustangs. Three Thousand Miles Across the American West. (The BLM disputes the “holding pen” characterization.) “I hoped to inspire adoptions and educate viewers on the necessity of population control.” 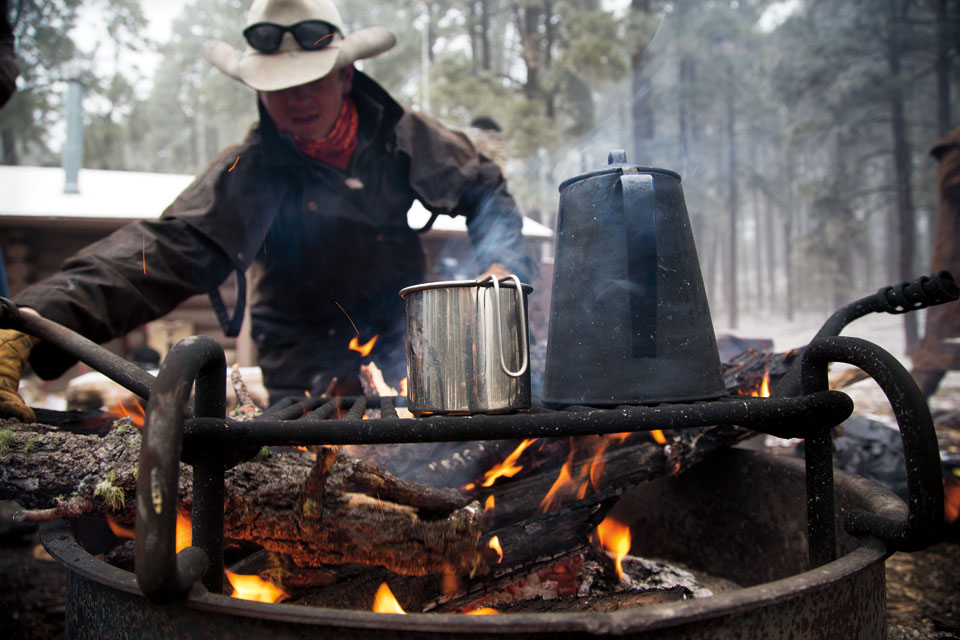 A trip on horseback from Mexico to Canada wasn’t unprecedented, of course, but there would be some notable differences between Masters’ group and its forebears. Sure, Masters was equipped with modern GPS gadgetry, which he says “tells you more about where you can’t go than where you can go”—revealing sheer cliffs and private land boundaries, for example. Yet the terrain they faced was arguably more challenging than it would have been in those cowboy days of yore: “What separated this journey from Kit Carson, the explorers, or the cavalry is they mainly stuck to the valley bottoms and the easy avenues of travel. There was no reason to go into the mountains. Well, a lot of those valley bottoms and easy places to travel now have golf courses and subdivisions and cities in them. That’s where people settled. What was made public was mainly stuff the early settlers didn’t want.” 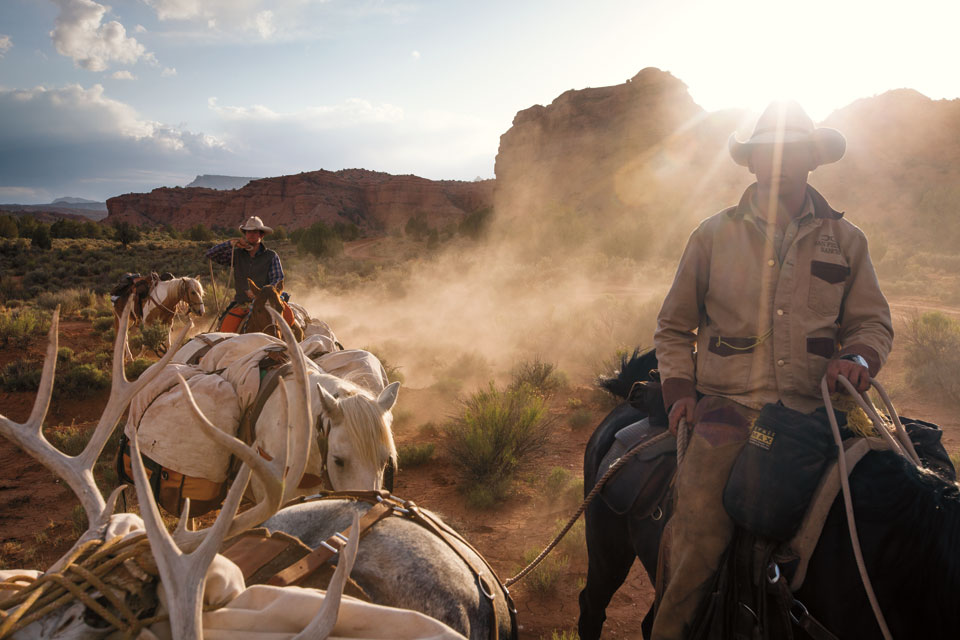 Back in southern Utah, the men finally managed to round up all their animals, reunite, and journey on. Over the next four months, they wound through the rest of Utah, Idaho, Wyoming, and Montana. They fly-fished, sometimes from horseback and in thunderstorms. They crossed treacherous rivers, cooked over open stoves, and lounged around bonfires. Even with the GPS, they got lost plenty and had to reroute around impossible terrain and territorial ranchers. There were injuries, too: “One guy got kicked in the head,” says Masters. And a cameraman took a good kick to the thigh: “He had this massive bruise and this big blood bubble. He couldn’t walk for about two weeks. We thought he broke his femur.” And Thamer came down with a case of dysentery. “He was a grumpy bastard after that, too,” Masters says, laughing. 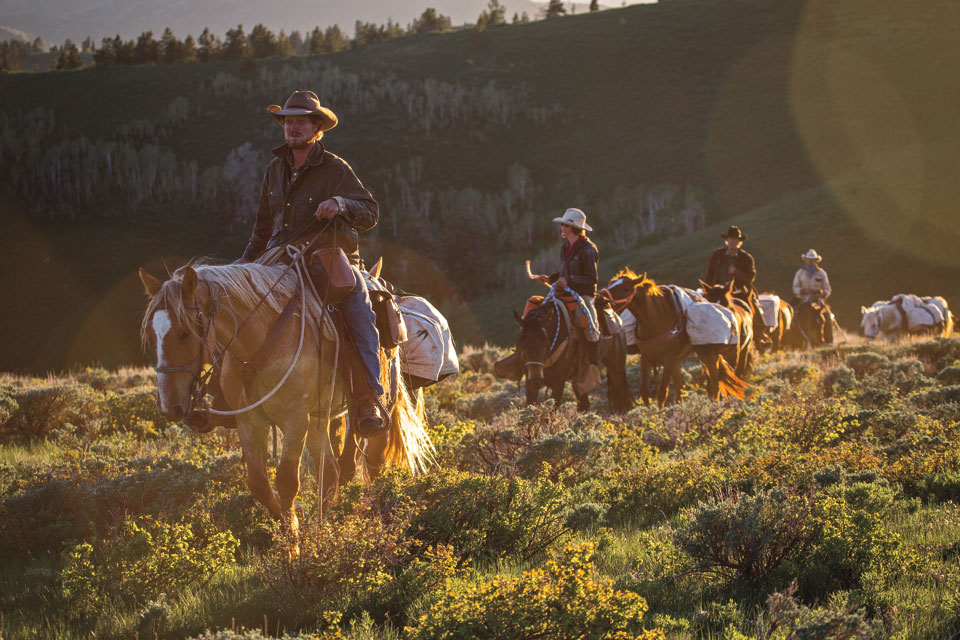 Eventually, three of the four—for sentimental reasons, Fitzsimons turned around just one mile short of the border—reached Canada. The end of the trip, punctuated by a simple green road sign reading, “LEAVING USA. STOP AND REPORT TO CANADIAN CUSTOMS,” brought with it a strange mix of emotions. There were the bonds the riders had forged with their horses. Despite the setbacks, there was a nagging feeling that maybe their trip wasn’t challenging enough. (Throughout Montana, for example, the men were never more than a few hours drive from their film crew’s base, and safety.) For the last 1,000 miles, the guys had mostly run out of things to say to each other, and they felt confused, even sad, as the trip came to a close. But for Masters, at least, it was all worth it. “I feel as if I get a lot of pressure from school, my family, from society in general, saying, ‘Ben you need to go to college, get a job, get a house, do these things and take the steps to becoming a successful person,'” he says. “And that’s all good, but for six months of my life I wanted to do what I wanted to do. And I did. And I will never regret that.”

You’ll find more stunning images from the adventure, along with details and reflections on the trip, in the book and in Unbranded, the film, which has been winning rave reviews and audience awards at festivals across the United States. It will be showing in select theaters starting this weekend. To whet your appetite, here’s a trailer and some additional photos from the book. Wish you were there. 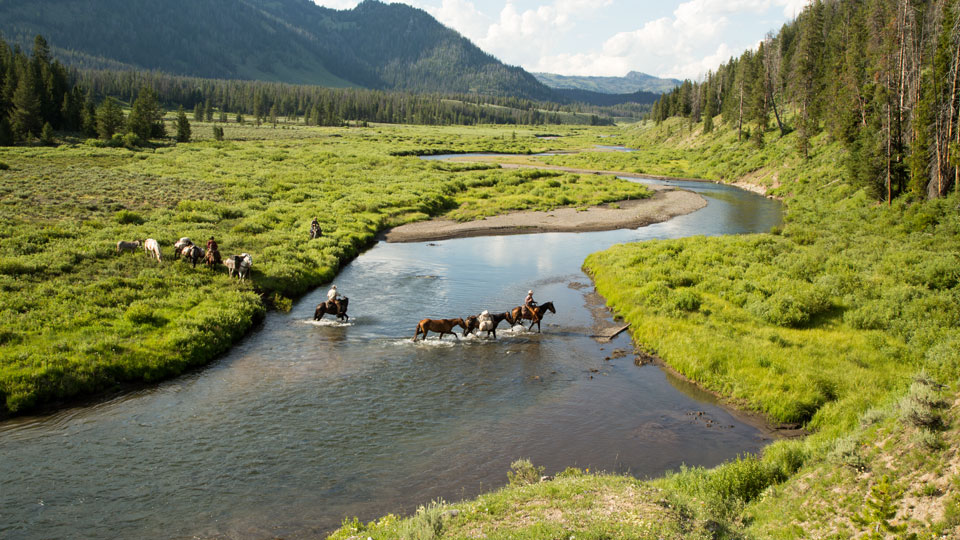 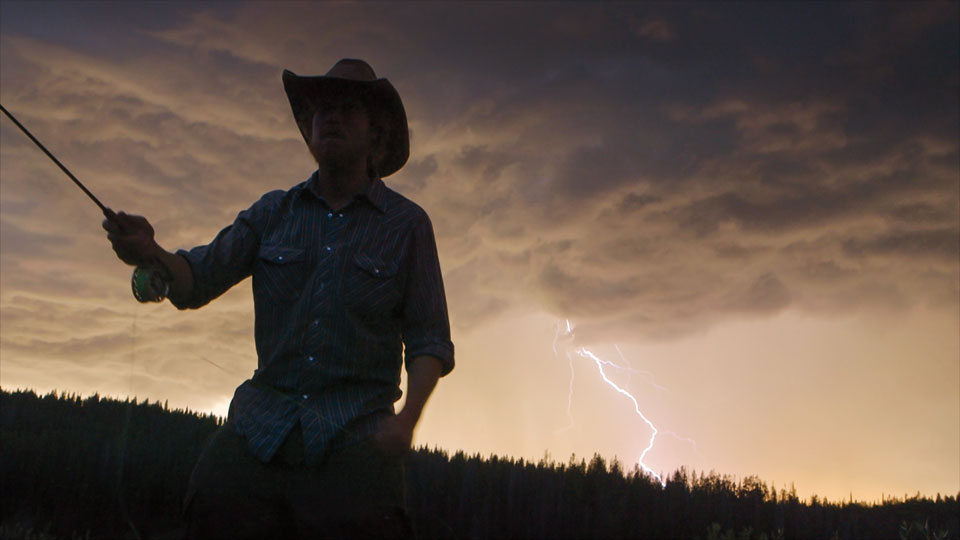 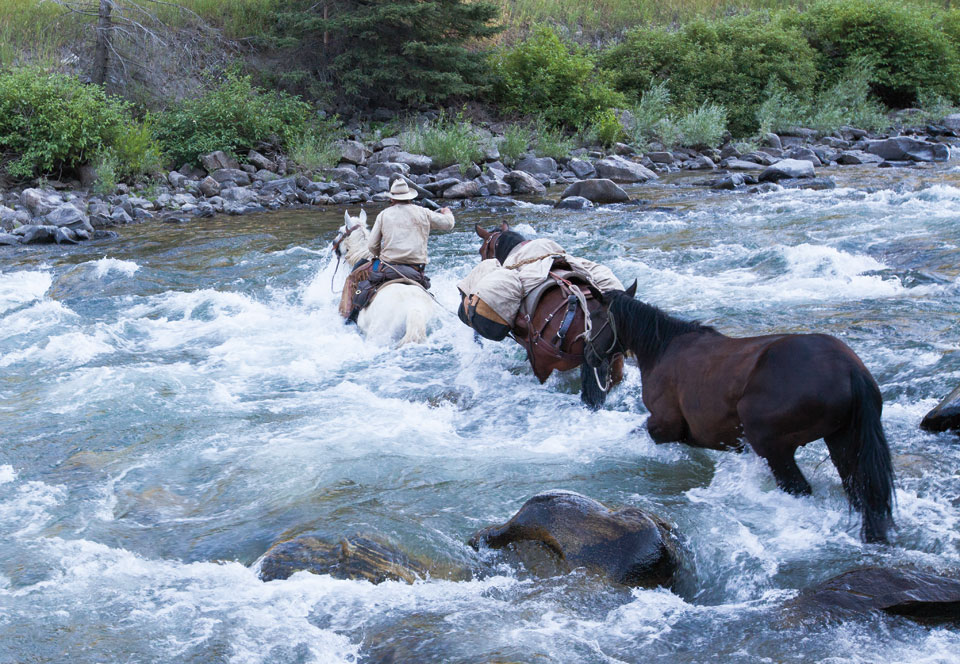 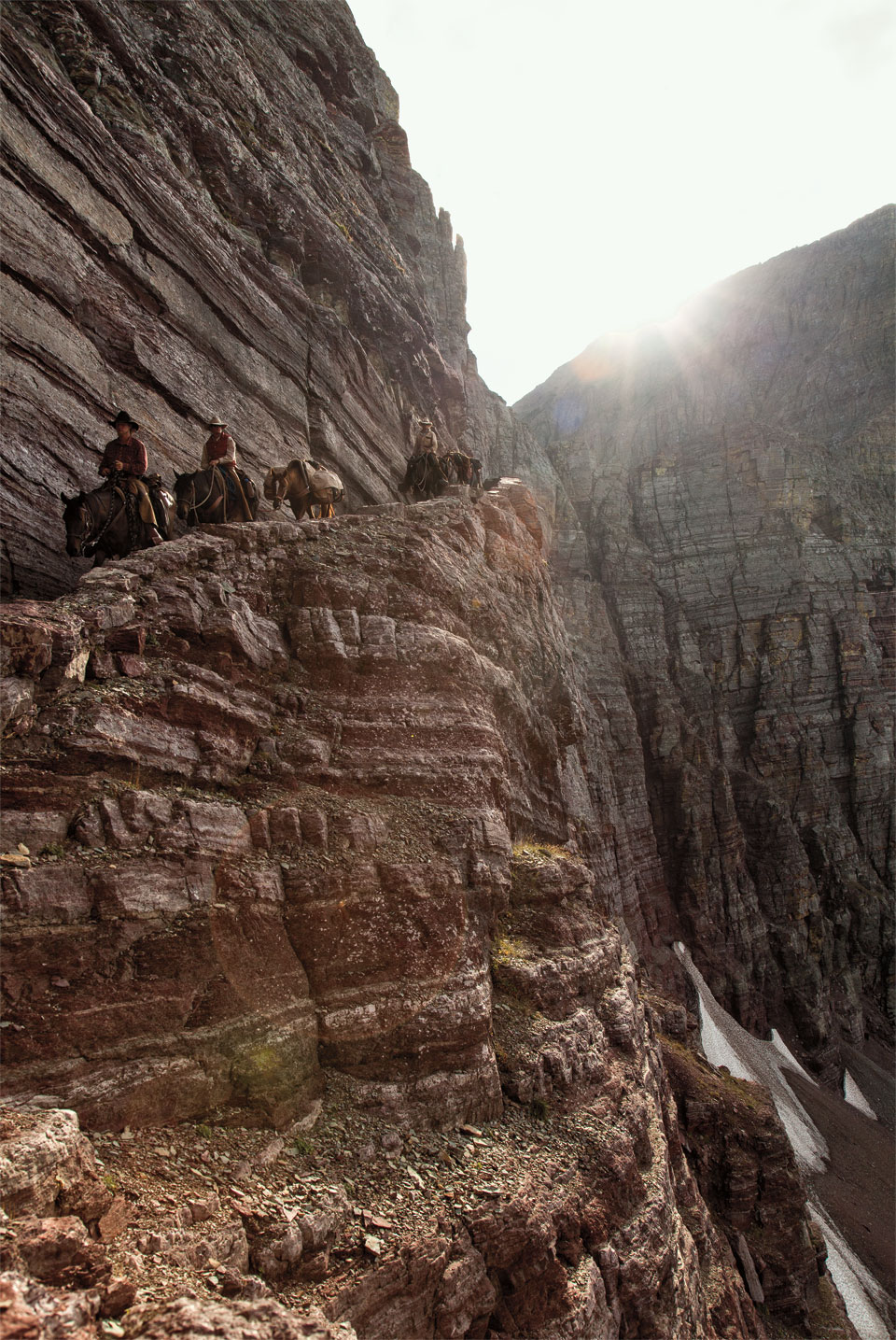