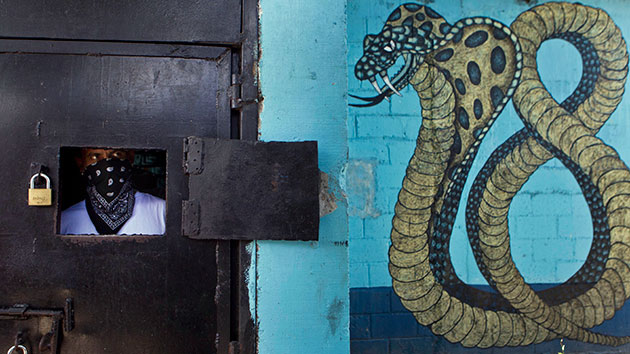 Chamelecón is a neighborhood in San Pedro Sula, Honduras, where the streets are lonely and the houses are marked. On one side of the street, two initials stand out on the walls: MS, the familiar scrawl of one of the most feared gangs, or maras, in Honduras: Mara Salvatrucha. Just across the street, another block of homes have the number 18 written on them—the tag for Barrio 18, the rival gang that also has taken up refuge in Chamelecón.

In recent years, the 50,000 people who live in the neighborhood have been terrorized by the maras. It’s a lawless place where entering means risk—especially for a journalist. But that’s my job, so I went to Chamelecón to try to bring this world to my readers at the Diario la Prensa, the newspaper I’ve worked at for the past 10 years in San Pedro Sula, a city that some experts consider to be the most dangerous in the world.

I always go out reporting with a photographer and a driver, and this story was no different. On our way there, we passed through a bunch of the barrios and colonias controlled by the gangsters. People told us not to go beyond the school, because no one would be able to protect us there. But that didn’t stop us. Our mission was to take photos, get a better look at these abandoned streets, and explain how the gang bangers dominate turf and change the lives of thousands of families there.

“Being a journalist in Honduras is for the brave,” my friends like to say—and even more so when you’re reporting on violence, corruption, or drug trafficking.

It was two in the afternoon, and when we arrived a few teens on bikes, and some more hanging out on the street corners, sounded the alarm. Immediately one grabbed his cell. He was a bandera—that’s what they call the kids who tell the gang leaders that there are strangers present. My photographer was taking some shots from inside the vehicle when, just a few minutes later, one of the banderas approached. “What are you looking for?” he asked. We tried to explain our work, but he didn’t give us time to say anything. “You’d better leave, or there will be problems.”

“Being a journalist in Honduras is for the brave,” my friends like to say—and even more so when you’re reporting on violence, corruption, or drug trafficking. Honduran reporters always have their adrenaline pumping. The constant hustle for what we call la nota roja—the crime beat, more or less—can make us feel numb, especially on those days when 10 or more people die violent deaths.

Going beyond the official story can be like signing your own death warrant. Reporting on the underworld can mean only halfway telling the truth, since telling the whole truth can make you a target for criminals. Since 2003, for example, the Honduran human rights commission has counted at least 51 murders of journalists and media professionals, the majority of them in radio and television. The vast majority of their killers remain free.

In fact, investigating that world once forced me to leave the country. Like other journalist friends, I fled for a time after receiving some threats related to a story I’d worked on. Journalists in Honduras have sought asylum elsewhere, and even have looked to the Inter-American Court for Human Rights for protection. That is a reality that we face daily. Fear always surrounds us.

Still, sometimes you have to face it head-on. A few months ago, I wrote a series about hitmen and decided I needed to actually sit down with one face-to-face—not exactly an easy job. After several tries, I was finally able to negotiate an interview after a number of calls. The hitman made the rules.

The hitman confessed that he’d killed 17 people, and he said he’d continue killing to earn a living.

The day arrived. Over the phone the killer told us the route, which brought us outside the city of San Pedro Sula; each kilometer was more uncertain than the last. We traveled about 30 killometers to a lonely place. My cellphone rang, breaking our silence—it was him, telling us to move a few more meters up ahead. We kept going, but no one was there. Then another call came, and this time he told us to stop the car and for all of us to get out.

Scared, we did as he told us. We didn’t know if he was going to attack us. Five minutes passed before we heard the sound of a motorbike, and we saw an armed man draw closer. He was tall, heavyset, with a hard face. From the moment he arrived he inspired fear, and the relatively short interview felt like it went on forever. I could feel the chill in his words. At 34, he confessed that he’d killed 17 people, and he said he’d continue killing to earn a living. At the end of the interview, he took the motorbike and left. On the ride back to the city, I couldn’t help but think about how we face death every single day.

Many people have asked me why I don’t stay in the United States or go to another country. I’ve thought about it, sure. When you’re always looking over your shoulder when you walk down the street, or when you don’t know whether to cover something because of the potential repercussions, you just want to go somewhere where you can feel safe, where you can do your job without being afraid.

In the end, though, I chose la nota roja. Sometimes it means you can’t tell the whole story, and sometimes it means telling the truth and putting yourself at risk. Here in Honduras, you learn to live with that fear.