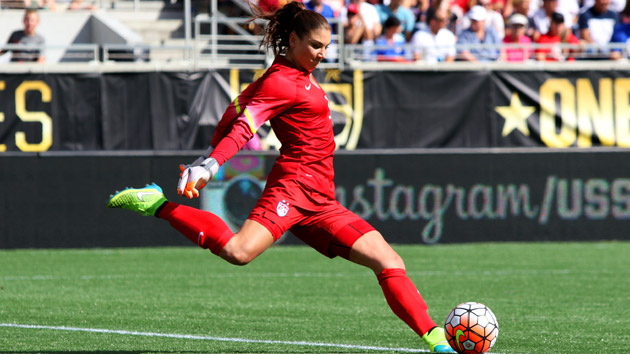 On Saturday, Hope Solo and the US women’s national soccer team were getting ready for practice at Honolulu’s Aloha Stadium, where they were scheduled to play Trinidad and Tobago on Sunday in the seventh game of their World Cup Victory Tour. As the goalkeeper surveyed the artificial-turf field, she noticed the hardened white paint on the football yardage markings near her goal and the rocky surface that made practicing her footwork all the more difficult. Solo even reached down and pulled up the turf:

Our loyal fans: Thanks for standing with us against unsafe field conditions & standing tall for #equal treatment pic.twitter.com/abn560Kitw

Megan Rapinoe, the team’s star midfielder, was on the players’ minds—just a day earlier, she’d torn the ACL in her right knee while training at the grassy practice field without contact. On top of that, there was the months-long fight with FIFA and the Canadian Soccer Association over the use of artificial turf at women’s soccer venues.

And so the team decided not to play Sunday, laying out its decision in an open letter on the Players’ Tribune. On Tuesday, US Soccer president Sunil Gulati apologized, noting that the federation had “screwed up” and had failed to make sure field conditions were adequate for the Trinidad and Tobago match. In Gulati’s apology, Solo says she saw the federation pushing for change. Gulati said all US games leading up to the Olympics would be played on grass.

In the run-up to tonight’s game against Trinidad and Tobago at San Antonio’s Alamodome—on another artificial-turf pitch—we spoke to Solo about the team’s decision to not play and the larger issue of inequality between men’s and women’s sports.

Mother Jones: How do the field conditions at the Alamodome compare to those of Aloha Stadium?

Hope Solo: [Laughs.] They are night and day. I mean, it’s playable. That’s a huge difference in itself. But it’s still turf, and one day I just hope we could move away from turf. Maybe not completely, but maybe 80 percent of the time, I think I might be okay with that. I can speak for myself and the players: Nobody likes to play on turf.

MJ: Why do players prefer natural grass to turf?

“You don’t see the men ever playing on turf. You don’t see any World Cups being played on turf—even when the major club teams come to America to play on a turf stadium, they lay sod.”

HS: We’ve been fighting this battle for quite some time. Soccer, to be honest, is not meant to be played on turf. The ball rolls differently. There are dead spots on every turf field that you play on. It’s a lot harder on the joints, on the body, on the shoulders, on the knees. It’s a just a different playing game. With that said, you don’t see the men ever playing on turf. You don’t see any World Cups being played on turf—even when the major club teams come to America to play on a turf stadium, they lay sod.

HS: It’s not just the field conditions. There are major disparities between men’s and women’s sports across the board, but the playing conditions are a major one for us. The field that we stepped out on in Hawaii, that wasn’t just turf versus grass. That had to do with player safety. We knew we couldn’t risk ourselves with the Olympic Games being around the corner. We have careers to protect, and we knew that in Hawaii, we absolutely had to take a stand. We lost Megan Rapinoe to a subpar practice field, although it was grass. It was pretty magnified what was at stake for us, and it was time to be vocal about it.

MJ: Who on the team was the person who said “enough was enough”?

HS: Megan Rapinoe hurt herself a day before. There was this weird feeling at practice of “what the hell is going on?” We knew the drainage grates were way too close to the line. Our fields were bumpy. We weren’t sure if Rapinoe stepped on the grate or in the hole beside it, but it was a noncontact injury. It was really scary. The players were upset. The coaches were upset. The staff was upset. And right then, I started taking pictures of the practice field. You know, there were rumblings among the players.

“I told my goalkeeper coach, ‘I will not go into that goal.’ I think I just had visions of another knee injury.”

We go to the stadium field. We start looking a little bit more at the field and bending over and picking up the little rocks. We see the huge bumps in the line, and the field turf actually pulls up. The media’s behind the goal, and they start seeing us looking at the field. And then we see our coach yelling at somebody, and our general manager starts thinking, “This isn’t okay.” We still practiced because the fans were right there. I remember saying, “I’m not going to practice in that goal.” The far end was worse than the near end, so we moved everything to one end. But I told my goalkeeper coach, “I will not go into that goal.” I think I just had visions of another knee injury. We shortened the practice, and then right when we got on the bus, it was kind of like, “Hey guys, what are we doing?” We all discussed it right there on the bus, and right there we were just like, “We can’t do this.”

MJ: And like you said before, it’s not just the field conditions that are troublesome.

HS: It’s a number of different things. You look at the marketing money put into the men’s team versus the women’s team. You really have to kind of tip your hat to the women’s team for selling out stadiums, because oftentimes you do that with less marketing dollars. We did a side-by-side analysis of the men’s contract and the women’s contract, and it’s very unbalanced, just the way that US Soccer’s money is invested from year to year. It’s just completely unbalanced. The argument is, well, women should not get paid as much as men, because they don’t bring in as much revenue. We hear it all the time. Our argument back is that we have the best ratings between the men’s team and the women’s team, and had we gotten more marketing dollars, we would have more ticket revenue. When we push for equality, we don’t want the exact same thing. We just want it more balanced.

“We got a $1.8 million dollar bonus for winning the World Cup, and we had to disburse it among the 23 players…The men, for losing, got $8 million to share among the players, and they also received millions of dollars for every point that they received in the World Cup.”

When you look at the salaries for the men versus the women, when you look at the bonuses, and particularly for the men’s World Cup versus the women’s World Cup, we got a $1.8 million dollar bonus for winning the World Cup, and we had to disburse it among the 23 players. And then we piece out some bonuses for our support staff who don’t get paid a whole bunch. The men, for losing, got $8 million to share among the players, and they also received millions of dollars for every point that they received in the World Cup. We got paid nothing per point in group play. We got paid nothing for making it into the knockout round. We basically didn’t get a bonus until we won the entire thing, which is incredibly difficult thing to do, and that bonus was quite a bit less than what the men got.

MJ: What has the federation done to address that since the World Cup ended?

HS: We were able to take the side-by-side analysis, and we were able to say to US Soccer, “These are the facts. It is unbalanced. What are we going to do about it? Because you guys are a progressive federation, and you value the women’s team. Well, show us that you value us. Don’t just tell us. Show us.” We are able to have more meaningful conversations.

It’s a great starting point that they are willing to have these conversations. Before, we’ve tried to have these conversations, and the door had been shut. But I think right now, it has to do with the players being unified, but I also think it’s the times that we live in. We have some of these incredible female role models who are standing up and feeling unapologetic about it. And I think it’s empowered us to do the same.