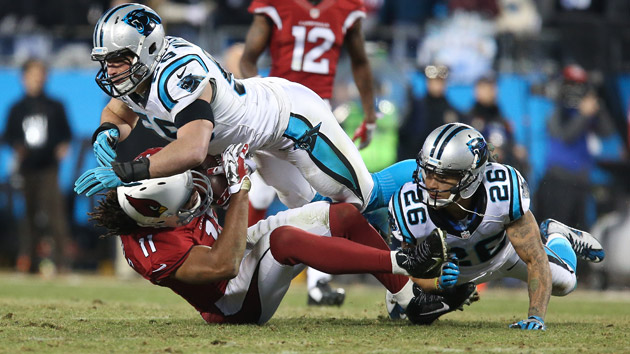 With a little more than a week and a half before the Denver Broncos and Carolina Panthers face off in Super Bowl 50, the National Football League has released its latest injury data, and it isn’t pretty. Its players have suffered 271 reported concussions this season, a steep uptick from 2014-15, when there were 206, and the highest number in the last four years. The NFL also reports that there were 182 concussions during the most recent regular season; there were 115 in 2014.

Jeff Miller, the league’s senior vice president of health and safety policy, gave a number of possible explanations for the rise in concussion reports, such as increased screening for possible head injuries, an “unprecedented” level of players reporting signs of injury, and a rise in participation from spotters and independent neurologists on the sidelines. It’s also worth noting that, the number of helmet-to-helmet incidents on the field rose 58 percent between 2014 and 2015 after a two-year drop.

The league’s figures for the 2015 season differ slightly from PBS Frontline‘s Concussion Watch project, which bases its data on the NFL’s weekly injury reports. Frontline found that there were 199 concussions sustained this year, compared to the NFL’s 182. (Frontline‘s data does not include the preseason.) Cornerbacks suffered the most this year, with 41 reported concussions, while wide receivers and linebackers bore the next highest number of injuries, according to Frontline.

This latest injury report comes just as doctors discovered posthumously that Tyler Sash, a 27-year-old former safety for the New York Giants who died of an accidental drug overdose in September, suffered from chronic traumatic encephalopathy, a debilitating brain disease. Cases so severe are rarely seen in a person his age. The New York Times reported on Tuesday Sash sustained at least five concussions throughout his playing career.