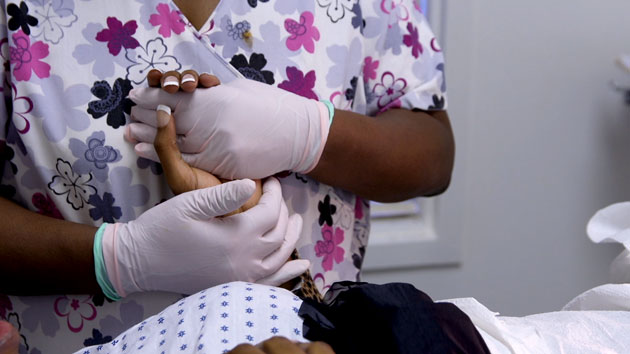 In Dawn Porter’s latest documentary, Trapped, a 19-year-old sits in an Alabama abortion clinic, recovering from her procedure. A white blanket surrounds her slight frame, and her hair is pushed back with an olive head wrap. She speaks frankly, but her internal conflict is clear.

“I want to go to heaven,” she says to the camera. “It’s like, what if I never have a little girl? What if I don’t get married? What if this happens, what if that happens, all because I had an abortion and that’s my payback?”

This scene is only one of the powerful moments viewers witness as Porter navigates the grim reproductive rights landscape in the South, with its complex relationship between religion and abortion. For some who live there, religion dictates that abortion is wrong—an unforgivable sin. For others, including the documentary’s protagonists, providing abortion care is one expression of Jesus’ commandment to love one another.

Porter was first introduced to the region in 2010, while hanging out with a group of idealistic young public defenders working in the Deep South. Her interest in them eventually led to her debut film, Gideon’s Army. “I was like a lot of good Northerners—prejudiced,” Porter says with a laugh. “A lot of people there were very generous in not being suspicious, and a lot of people I’m interested in are misunderstood by people they live with. These characters have thought a lot about who they are, as people, as Southerners.”

After Gideon’s Army, while Porter began working on her second film, Spies of Mississippi, she stumbled upon some unexpected inspiration. Whenever she’s on location, Porter picks up the local newspapers, and when she was in Mississippi, the Jackson-based Clarion-Ledger featured an article about the last remaining abortion clinic in the state.

“I just felt like how could it be that a pro-choice woman who pays attention to politics and reads the paper doesn’t realize there’s only one clinic in Mississippi?” she asked.

So she did what any good documentarian would do—she called up the clinic and asked if she could stop by for a visit. After meeting Dr. Willie Parker—a Harvard-educated OB-GYN in his 50s who’s from Alabama and has been providing abortions full time since 2009—and seeing the conditions for staff members at the facility, she decided to work on a documentary that eventually became Trapped. The film’s name comes from insidious laws known as TRAP laws—Targeted Regulation of Abortion Providers—that target abortion providers through unnecessary regulation.

“For better or worse, the right to have an abortion is a protected right by the Constitution. How could it possibly be that states could be intentionally, without any subterfuge, aiming to take away that right?” she asks. “I think a lot of people don’t like people to do things that are underhanded. And I think that these laws are underhanded. Straight up, come at me! You want to overturn Roe v. Wade? You should do it straight up.”

The heroes of her film are the women who run clinics in Alabama, Mississippi, and Texas, as well as Parker, who works with several clinics in the Southeast to provide the procedure. After nearly every legislative session, a new law threatens to close down these clinics, and all the owners struggle to remain open as they make their way through anti-choice protests and daunting piles of paperwork. It’s hardest of all to answer the phone calls from desperate women who must be denied services because the clinics are overbooked and, in some cases, have only one doctor.

“Women who have had abortions are so stigmatized, and so made into caricatures,” Porter says. “There’s the Jezebel and the irresponsible co-ed, so seeing the range of folks was a big deal.”

The film is steeped in religion, and Parker’s faith occupies a central role in his personal story. Parker is filmed singing hymns with his family at a Baptist church and praying at a meal with other clinic workers. He says he wants to talk to the church about abortion because he thinks the church is missing a ministry opportunity by condemning it. Callie Chatman, a recovery room assistant at Reproductive Health Services, agrees. “No woman has ever told me that she feels it’s alright to have an abortion, but they have told me that, ‘This is the only decision I can make at this time,'” she says. Chatman is later seen praying with a patient in recovery.

Porter says the issue of religion kept coming up organically. “The patients would say, ‘Dr. Parker, am I going to hell?'” she remembers. “It struck me how often he was counseling people, telling them they aren’t going to hell, and talking about his own beliefs.”

In another scene, the clinic workers say “The Lord’s Prayer” together as they prepare to endure an Operation Rescue anti-abortion demonstration in front of the Reproductive Health Services clinic in Montgomery, Alabama. The demonstration has all the hallmarks of abortion protests from small towns to the steps of the Supreme Court: children holding signs depicting fetuses with such messages as “I’m a child, not a choice,” and yelling, “Jesus Christ saves!” The clinic workers have erected signs—one says, “Jesus never shamed women”—in front of the building.

While filming, Porter and her team experienced some of the safety concerns that many abortion providers must face on a daily basis. Protesters looked Porter up and began posting her name on their websites. They screamed at her as she visited the clinics. Trapped premiered at Sundance mere weeks after a man in Colorado brought a gun into a Planned Parenthood clinic and started shooting, killing three people and wounding nine others. Porter learned from Parker to not let fear dictate her life. In one of their final interviews, he tells her that he doesn’t wear a bulletproof vest. She later asks him if he had any concerns about her including that fact in the film.

“And he was like, ‘You can and you should. Because I don’t, I’m not going to, and that’s not going to keep me safe. Me being vigilant and responsible will keep me safe,'” she continues. “He said, ‘I’m not foolhardy. I don’t want to die, but I’m also not going to live as if that’s around every corner.'”