No television “event” today has a prayer of matching Roots, the eight-part 1977 miniseries based on Alex Haley’s autobiographical slavery saga. Those broadcasts attracted some 85 percent of American TV households. 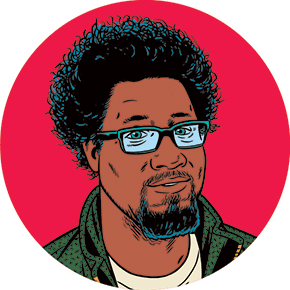 Comedian W. Kamau Bell, whose latest project, a CNN docuseries called United Shades of America, launched in April, still remembers watching Roots when he was little. Who could forget that iconic scene in which Kunta Kinte, a Mandinka holy man’s grandson kidnapped from West Africa and sold into slavery, endures a brutal whipping for refusing to utter his slave name?

“If you deconstruct the DNA of people my age and generation, Roots is in there,” Bell tells actor LeVar Burton, whose portrayal of Kinte launched his career. Burton, now 59, went on to play countless roles (including Geordi La Forge on Star Trek: The Next Generation) and host the PBS children’s show Reading Rainbow. But an entire generation will forever associate him with the slave who was determined never to forget his roots.

Now, Burton is an executive producer of a star-studded remake from A&E and the History Channel that updates Haley’s story for a 2016 audience. We enlisted Bell to chat with Burton about the epic retelling, which airs for four nights starting on Memorial Day.

WKB: Wait a minute, I’m supposed to ask the questions! [Laughs.] It was surreal. I have a four-and-a-half-year-old, and I immediately started thinking, “How would I prepare her for this?” We’ve already started the slavery conversation, but not in that direct of a way. Overall, I’m super impressed with how the production updates the story—better special effects and better makeup, but also we know more about the history now.

“David Wolper cast all of America’s TV dads as villains. But those names don’t mean anything to this generation.”

In my black circle, your name comes up a lot. You got us at Roots when we were little. Reading Rainbow, obviously. Star Trek—I don’t know if this is the right way to say it, but you’re like a black totem! So when I heard they were remaking Roots, my first thought was, “Oh no! No, no, no, no, no!” But when I read that LeVar Burton was one of the producers, I went, “Oh, yes, yes, yes, yes, yes!”

LB: I had a similar reaction. I was at a screening at the Directors Guild of America for 12 Years a Slave. It was Russell Simmons who said to me, “You know they’re remaking Roots?” I was incredulous, but he assured me it was true, and I was troubled. For obvious reasons, I’m really protective of what I believe to be an American classic. Less than 48 hours later, I got a call from executive producer Mark Wolper, the son of [original Roots executive producer] David Wolper. Mark explained that he had wanted to get to me and the other cast members before the news broke, but somebody jumped the gun. I asked him point-blank, “Mark, why?” He explained that he had attempted to show the original to his children, and the response was very lukewarm. They understood why Roots was important to him, but they didn’t feel it had much relevance to them. Mark thought, “Wow! Perhaps we need to remake it with a different sensibility and with a different set of actors.” Because part of the genius of David Wolper was that he cast all of America’s TV dads as villains. Ed Asner, Chuck Connors, Lorne Greene, Robert Reed, Lloyd Bridges—they all played the villains, and it was a brilliant idea. But those names don’t mean anything to this generation. I got it right away. I said, “How can I help?” And then immediately I went to the political: Look at what’s going on in America today. Could the timing be more perfect? I don’t think so.

WKB: Will that connection be apparent to somebody who isn’t a person of color living under the glove of racism?

LB: I don’t know that it will be readily apparent to everyone. But I’m hoping that the conversation around Roots when it airs will fill in the gaps so that it is absolutely, unavoidably clear that America today is directly related to America of the antebellum South and the slave trade. And that some of the issues that we still grapple with have their roots in slavery and its attendant legacy of racism. 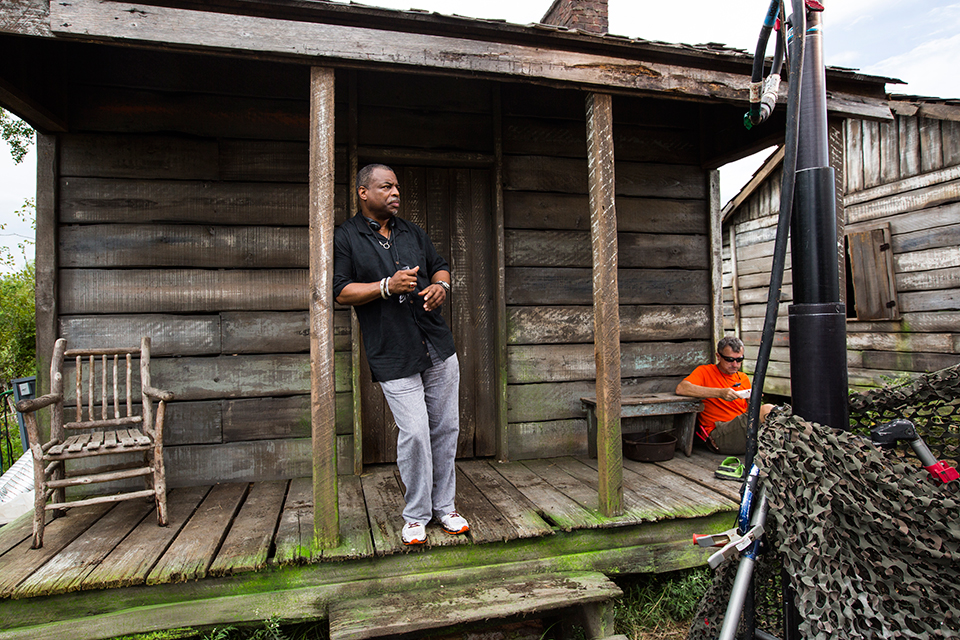 WKB: It seems we’re going to be remaking Roots every 30 years for a while!

LB: Well, how often have we seen Holocaust stories? I bring that up because there’s a wonderful tradition in Jewish culture that is about “never forget.” In insisting that this story is passed onto each successive generation, it has become part and parcel of Jewish identity. Human beings have remarkably short memories, and so it is essential that we continually remind ourselves.

WKB: Okay, here’s a Fox News question: What do you say to Americans, many of them white, who say, “Slavery happened a long time ago. Why are you people still talking about this?”

“The vestiges of slavery are alive and well and have been institutionalized in American culture.”

LB: The vestiges of slavery are alive and well and have been institutionalized in American culture—in the disproportionate number of black men incarcerated, in phenomena like Driving While Black. It’s like Neil deGrasse Tyson says about science: “The great thing about science is, whether you believe it or not, it’s still true!”

WKB: You can’t argue your way out of the theory of gravity!

LB: Right. So to move forward as a nation, we must not try and ameliorate the past, but embrace it. If one more person tells me to get over it…

WKB: You were, what, 19 when you did the original Roots?

WKB: Wow! That’s an intense first audition. That’s not a toothpaste commercial. That’s not the best friend on the sitcom, the new black guy in town on an episode of That’s My Mama. When did you understand that this role was going to define you?

“One of the things Malachi and I talked about was the need for him to infuse Kunta with his spirit.”

LB: It was a real initiation.

WKB: Was there a point you felt like, “I don’t want to be answering Kunta Kinte questions anymore”?

LB: Yeah, there was a time, early in my career, when I felt the shadow of Kunta was so large as to be insurmountable.

WKB: Where did you find Malachi Kirby, the new Kunta Kinte?

LB: Malachi is from London. He came in on tape, and he was one of the handful that got down to the wire. I needed to be sure, so we sent him to South Africa to do a screen test. Night 1 director Phillip Noyce put him on film, and I saw everything I needed to see.

WKB: Your Kunta was somewhat childlike. With Malachi’s portrayal, there’s more a sense of Kunta as a man. A young man, but much more is made of his warrior spirit. 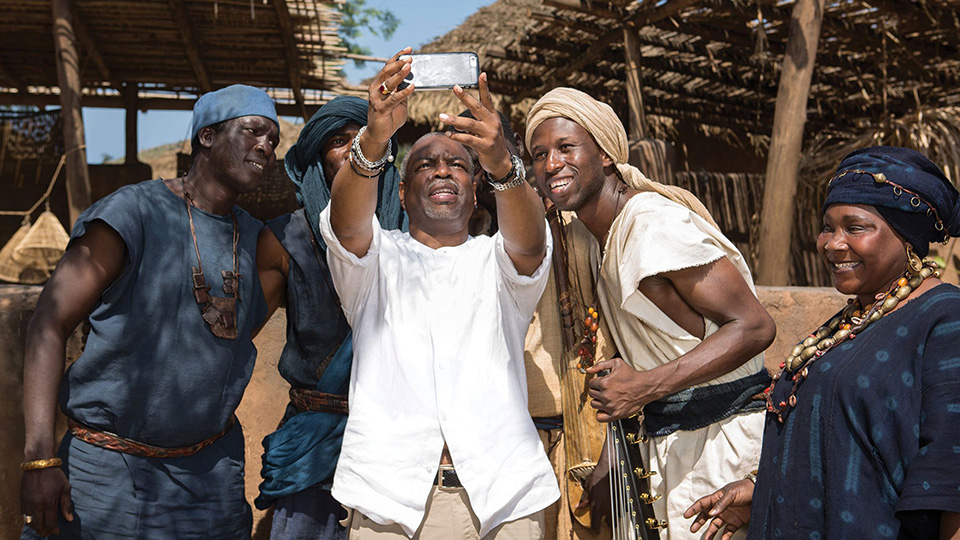 LB: I’m glad you picked up on that. One of the things Malachi and I talked about was the need for him to do his version, to infuse the character with his spirit.

WKB: Kunta has a new origin story, too. Slave trading among the tribes is one of the first things we hear about. We also learn the Kintes are Muslim, which feels like another thing to signal blast: Not all Muslims are from the Middle East!

LB: When Alex Haley did the original research, we didn’t know Juffure was a major center of commerce. That information is due to the success of the novel and the miniseries; many more people were interested in studying West Africa, and specifically Gambia. We know now that the Mandinka were horse warriors—we didn’t know that in the ’70s. These are essential elements. We had historians involved in every aspect: set design, costume design, music.

WKB: So maybe in 40 years, we’ll be able to tell an even more accurate tale?

“Whether you feel like this story has any relevance or meaning to you, the real truth is that it does.”

LB: Alex used linguistic clues that were part of his family’s oral tradition—the story of the old African who came from a place where there was a “Kamby Bolongo” and called a guitar a “ko,” and one day he was in the woods looking for wood to make a drum for his younger brother and was set upon by slavers. Those clues led Alex to West Africa, and then Gambia and the village of Juffure, where the griot confirmed the story. Today, you can swab the inside of your mouth and send it away and get a written report of where your DNA shows up on the planet!

WKB: And find out where your great-great-grandpapa had breakfast that morning!

LB: Exactly. So in 40 years, who knows what we will be able to know? What will remain is the essential nature of storytelling as a part of who we are, as a mechanism that always has and always will help us define—for ourselves—who we are, why we’re here, where we are going. And most importantly, what is my own contribution?

WKB: What do you hope Americans who aren’t descended from slaves will take away from this new Roots?

LB: That this is our common story. And whether you feel like it has any relevance or meaning to you, the real truth is that it does. If you are part of the fabric of America, this is your story, too.