Six nights a week, Popole Misenga travels by bus from a favela in the northern reaches of Rio de Janeiro to a private college on the city’s west side. The trip takes roughly two hours, and once he arrives—often beat from a day’s work loading trucks—he makes his way past the classrooms to the school’s small outdoor gym, where he slips on a heavy white judo robe, steps barefoot onto blue vinyl mats, and grapples with his workout partners until exhaustion sets in.

These days, Misenga is an Olympic-caliber athlete without a country. But before he was that, he was a member of the Democratic Republic of the Congo’s national team, which came to Brazil back in August 2013 to compete in the judo world championships. Misenga had survived the DRC’s devastating civil war only to suffer under its abusive coaches, who he says would punish him and his teammates for losing practice matches by denying them food for days and even locking them in a closet. (The secretary-general of the DRC’s judo federation claims this never happened.)

When the team arrived in Rio that year, things took on a new level of crazy. The head coach promptly disappeared, Misenga says, taking with him the athletes’ passports, food vouchers, and uniforms. Misenga had to borrow a competitor’s robe for his first match, which he lost in three minutes. When the coach finally returned after a three-day bender, Misenga decided he was done with his country: He would stay in Brazil as a refugee. Wandering around Rio, he began stopping every dark-skinned passerby to ask, in French, “Do you know where the Africans live?”

Wandering around Rio, he began stopping every dark-skinned passerby to ask, in French, “Do you know where the Africans live?”

Misenga’s decision kicked off a chain of events that would lead the 24-year-old judoka to the cusp of competing in this summer’s Olympics as part of an inaugural all-refugee team consisting of athletes from around the world. Last October, with the Syrian migrant crisis sweeping Europe, International Olympic Committee (IOC) President Thomas Bach announced that, for the first time, refugee athletes “having no flag to march behind, having no national anthem to be played,” could compete in Rio 2016. The Olympic flag would be their banner.

All told, there are 43 athletes out of an estimated 20 million refugees worldwide who have been selected as potential members of Team Refugee Olympic Athletes. The IOC will announce the full team this week at its executive-board meeting; besides Misenga, the committee has publicly identified just two other contenders: taekwondo master Raheleh Asemani, an Iranian living in Belgium, and Syrian swimmer Yusra Mardini, who lives in Germany and whose backstory is the stuff of one of those Bob Costas-narrated profiles. Last August, Mardini and her sister left Turkey on a packed boat with 18 other Syrian refugees. After the engine failed, the sisters jumped into the water and helped kick the craft three-plus hours to the Greek island of Lesbos. (Yolande Mabika, another Congolese judoka who stayed in Brazil, also hopes to make the refugee team.)

(Update, 6/3/16: Misenga, Mabika, and Mardini were named to the 10-person all-refugee Olympic team, which includes athletes originally from the DRC, Ethiopia, South Sudan, and Syria. Asemani did not make the team.)

Misenga grew up during a particularly bloody time in the eastern DRC, the site of a conflict that’s been described as Africa’s world war. A rebel attack forced him to flee his home on foot as a young child, leaving his family behind. (He hasn’t seen them since.) He ended up in the capital, Kinshasa, sleeping on the street with other children before finding an orphanage. It was there, at age nine, that he was introduced to judo. The sport instantly drew him in. “People who like judo are calm,” he told me, “with respect for other people.”

We chatted in the university’s courtyard, steps away from where he trains under the guidance of 73-year-old Geraldo Bernardes, who’s been to four Olympics as coach of Brazil’s national team. The day I visited, Misenga was late to practice, and his worried coach made some calls to make sure he showed up. By the time Misenga arrived, at dusk, the training session was all but over. Bernardes lectured Misenga about not wasting his opportunity before quickly switching gears to discuss his Olympic weight class. (They decided on 198 pounds; Misenga’s stocky frame was most of the way there.) 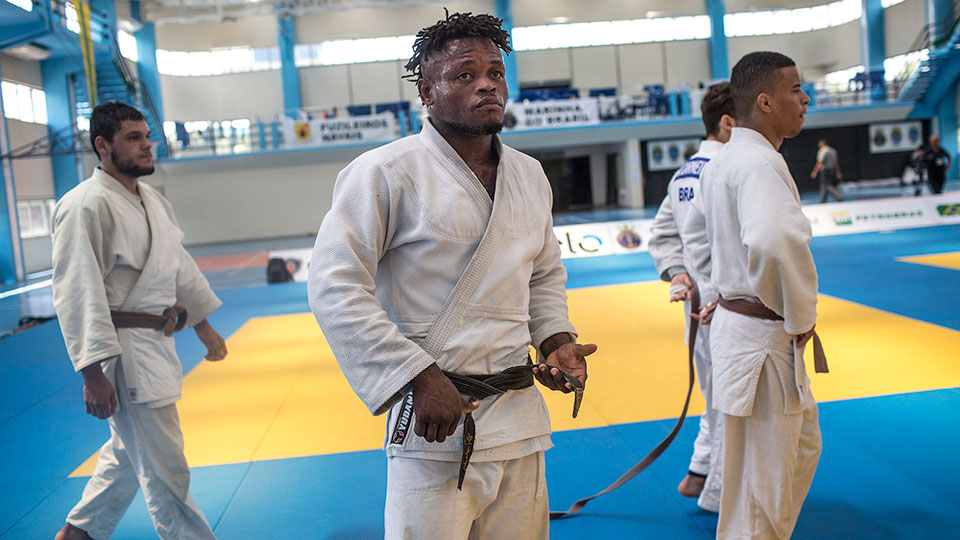 Bernardes met Misenga through a nonprofit he’d started with Olympic medalist Flávio Canto to provide an outlet for inner-city kids. He’d seen the young judoka through a difficult transition: Early on, Misenga fought like his life depended on it, sometimes yanking his partners onto the concrete slab surrounding the mat. No wonder, Bernardes added, given the “subhuman” conditions Misenga faced back home.

While he has adapted to his training in Brazil, Misenga still struggles away from the mats—especially when it comes to money. Instituto Reação, Bernardes’ nonprofit, helps Misenga with some basics. He’s occasionally found work loading boxes onto trucks for about $11 a day, but Misenga and his Brazilian wife have four mouths to feed—a one-year-old son, plus her three kids from a previous relationship. It embarrasses him that she’s the breadwinner: “A big guy like me should be able to pay for the house.”

His friends in Brás de Pina—a favela home to Angolans, Moroccans, and some Congolese—say, “Give up this dream and get a real job.”

It doesn’t help that his friends in Brás de Pina—a favela home to Angolans, Moroccans, and some Congolese—say things like, “Do you really think they’ll let you compete? Give up this dream and get a real job.” But Misenga is holding out hope. Maybe the games will lead to a sponsorship, or at least income steady enough to pay for some new sneakers—he’s been running in a pair scavenged from the trash.

After an hour of talking, it was getting late, and Misenga’s broad shoulders were starting to slump. We walked out through the university’s gate and said our goodbyes at a nearby intersection. Misenga crossed the street and headed up a hill, off to find the first of his two buses home. He still had a long way to go. 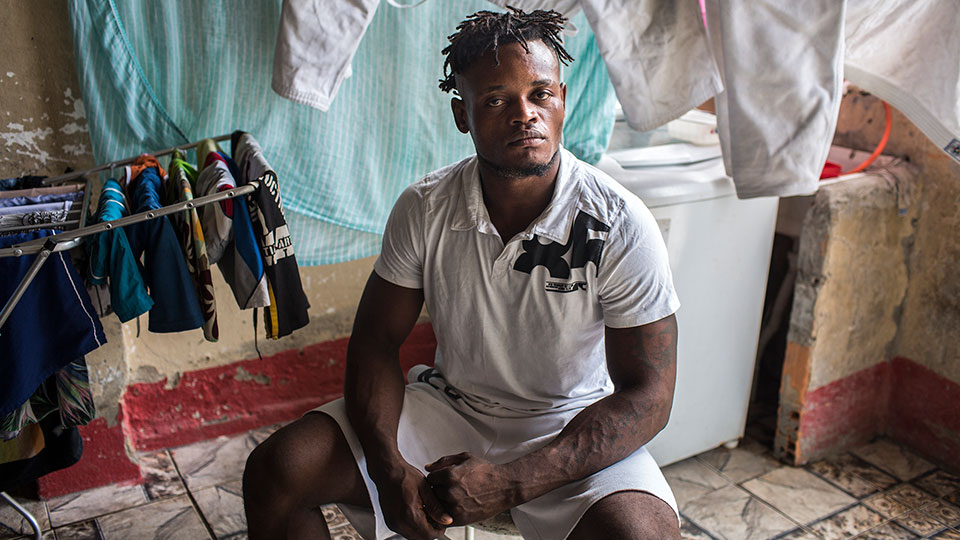