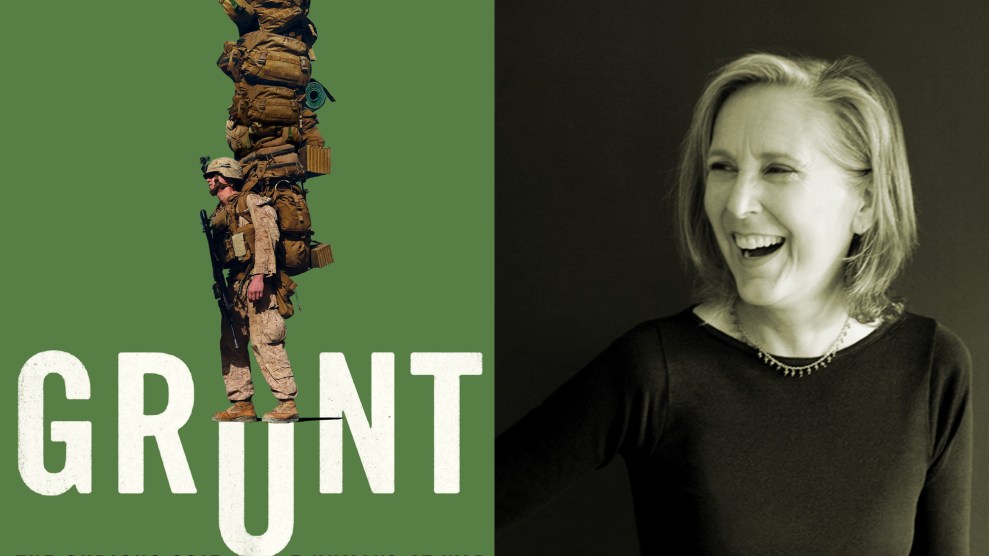 Mary Roach’s latest book, Grunt, looks at the weird yet deadly serious science of keeping soldiers alive. In a globe-trotting tour of labs, training grounds, and a nuclear sub, Roach explores how fighting men and women sweat, sleep, and poop—as well as the Pentagon’s efforts to defeat threats from improvised explosive devices to explosive diarrhea.

“No one wins a medal” for this obscure, often gross, survival research, Roach writes. “And maybe someone should.” Like her previous books Gulp and Stiff, Grunt oozes bodily fluids, flippant footnotes, and weapons-grade wordplay. I caught Roach at ease at her home base.

Mother Jones: Given your past subject matter—dead bodies, Elvis’ megacolon, sex in space—what brought you to the military?

“Always go to the bathroom before you go into a life-or-death situation.”

Mary Roach: I came about it a little indirectly. I was reporting in India on the world’s hottest chili pepper and a horrific eating contest where people eat these peppers. I learned that the Indian Defense Ministry had made a nonlethal weapon like tear gas out of the world’s hottest chili pepper. So I went over to this military defense lab and interviewed them, and while I was there, I got this idea: “Military science is kind of more esoteric than you might think.”

MJ: This military research spans a huge range of topics, from weird stuff like stink bombs to survival stuff that keeps people alive. You mention a Navy researcher who made a breakthrough on the use of rehydration fluids to fight diarrhea, which someone hailed as “perhaps the most important medical advance of this century.” Which discoveries made by the military have had wider benefits for all of us?

MR: A lot of the vaccine work and things that are used to combat tropical diseases and illnesses that we don’t really think about day to day, like dysentery and diarrhea. Also repellents like permethrin for mosquitos, because we had soldiers in Vietnam getting bitten by creatures they don’t normally get bitten by here.

MJ: What seemed like the biggest boondoggle or waste of money?

MR: How about red-orange underwear? At the turn of the last century, there was this idea that the color red would somehow mitigate heat stress and make you better able to cope in tropical environments. There was this bizarre project where hundreds of pairs of red underwear and hats were shipped over to some troops in the Philippines. They used this heavy sort of dungaree cotton to make the underwear, which was really hot and not going to cool you down. And the dye didn’t stay. Needless to say, the red underwear didn’t keep anyone healthier or cooler.

MJ: Have you picked up any personal survival tips—anything you do to keep from getting sick, or to stay cool or not getting eaten by sharks?

“If you’ve managed to get out of the submarine, don’t hold your breath.”

MR: Somebody did this delightful study where they put guys in life rafts off a dock in Florida. They were looking into simple ways to improve survival, like wetting your shirt and putting it back on. Just having a wet shirt conserved body fluids; you’re not sweating nearly as much. In terms of repelling sharks, it depends on the kind of shark. But the thing that is reassuring is that for the most part, sharks are pussies, and they want to go after injured or dead prey. There was one study where a swimming rat kicked one in the nose and the shark was like, “I’m out of here!” Also, always go to the bathroom before you go into a life-or-death situation—that’s something a Special Operations soldier shared.

MJ: One tip that surprised me was that taking your shirt off when it’s hot actually makes things worse.

MR: Please, men, don’t take your shirts off! It makes sense; you’re getting a direct hit of solar radiation. Wear a loose white shirt, don’t take it off. If you get infected with maggots, leave them in. If you’re on a sinking submarine…well, that’s not really practical.

MJ: Don’t hold your breath if you’re escaping a submarine!

MR: Don’t hold your breath—breathe out. If you’ve managed to get out of the submarine, and you don’t have an escape suit, as you go up, breathe out. It’s so counterintuitive; I would want to hold onto my breath. There’s a great demonstration they do in submarine school where they take a Mylar bag from a wine box, blow it up, and let it go at the bottom of the training tank. It gets to the surface and it bursts. It’s a very graphic and memorable demonstration of why you shouldn’t hold your breath.

MJ: Among all the military jobs you observed, was there one where you thought, “that’s not for me”?

MR: What’s a gig that would really suck? The person who has garbage duty on a submarine—it’s kind of treacherous. They turn everything into a slurry, and they put it into canisters that they then shoot down from the bottom of the submarine to make sure that it doesn’t get hit by the propellers.

MJ: Was there a job you’d really want to do?

MR: I kind of thought the job of the chef in the insect kitchen at the insectary at Walter Reed Hospital was cool—cooking for insects and their larvae. It’s more fun to tell people than to do it, because some of the recipes include things like rabbit turds.

MJ: Did hanging out with soldiers and researchers change any misconceptions you had about the US military?

“If you get infected with maggots, leave them in.”

MR: I didn’t have any conception of this world at all. I didn’t realize that almost any of this existed—the Naval Submarine Medical Research Lab, or NAMRU Three or the Walter Reed Entomology Branch. That was all a surprise to me. I had maybe a misconception that everyone in the military was sort of hawkish. But in fact, the people who deal with the aftermath of war, trying to repair people’s bodies and minds, they are understandably quite anti-war. They’re not big boosters of war, particularly the people I talked to at the Armed Forces Medical Examiner System. Pathologists, people who have a real, day-after-day, graphic presentation of what war does to the body. I wasn’t really expecting that.

MJ: One of the interesting things about your book is how much effort the military spends on keeping people alive.

MR: There’s a tremendous amount of effort. At the very highest levels, you have to think about,”Why we do want them alive?” So that they can keep going and finish the job. But the people who do the research are not doing it for that reason. They’re doing it because they actually care. They know a lot of these people. They were these people.

MJ: Which bodily fluid freaks you out the most?

MR: Let’s see, I’m going through all of them in my head, it’s lovely! I think saliva, particularly un-stimulated saliva, the mucous-y kind. I find that pretty gross. Then again, it doesn’t smell. There was a moment in this book where there was a power outage [at a lab] and in the freezer there were a lot of diarrhea samples that thawed. But taking away smell, I’m going to go with saliva.

MJ: The thing that surprised me the most about this book is that you went to Djibouti to research diarrhea and you didn’t make a “booty” joke.

MR: Because I’m so mature and sophisticated that it never even crossed my mind. Something in me just stopped me from going there. That’s rare for me. I don’t often have that internal gatekeeper.