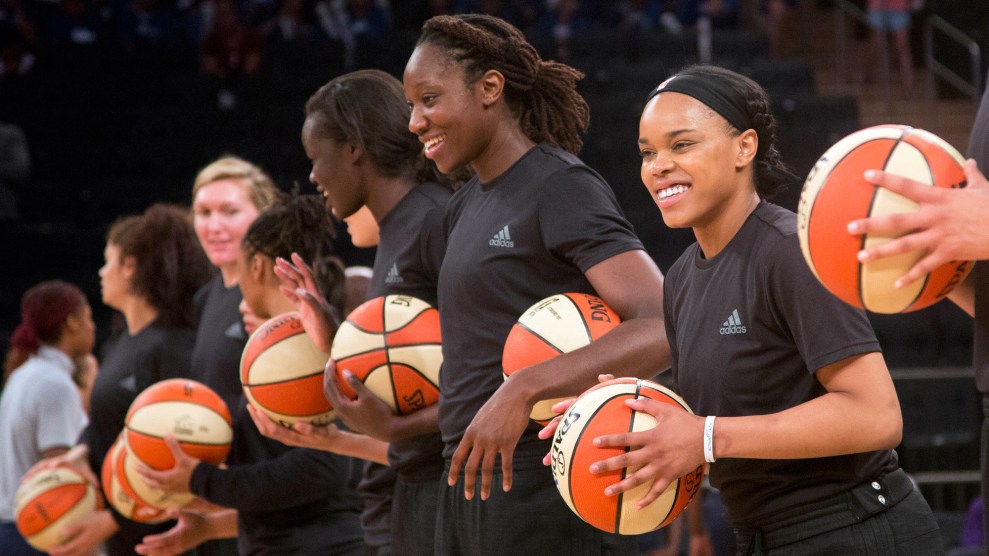 Update July 23, 7:42 p.m. ET: WNBA president Lisa Borders announced Saturday that the league would rescind the fines delivered to the teams this week for wearing black t-shirts during warm-ups in the wake of recent police shootings. “While we expect players to comply with league rules and uniform guidelines, we also understand their desire to use their platform to address important societal issues,” Borders said in a statement. “[W]e plan to use this time to work with our players and their union on ways for the players to make their views known to their fans and the public.”

Appreciate our players expressing themselves on matters important to them. Rescinding imposed fines to show them even more support.

In the locker room Thursday afternoon, following a home-court loss to the Indiana Fever, players from New York Liberty refused to answer questions about basketball. Same with the Fever.

That morning, the Women’s National Basketball Association fined the New York Liberty, Phoenix Mercury, and Indiana Fever $5,000 apiece, and their players $500 each. Their transgression? During warmups in recent games, they’ve donned black t-shirts in support of the Black Lives Matter Movement. (For one game, the Liberty’s shirts included hashtags for #blacklivesmatter and #Dallas5—recognizing the five police officers slain in Dallas.) Earlier this week, the league sent out a memo reminding players of its attire policy, and noting that players could not alter their uniforms in any way.

“We are proud of WNBA players’ engagement…but expect them to comply with the league’s uniform guidelines.”

“We are proud of WNBA players’ engagement and passionate advocacy for non-violent solutions to difficult social issues,” league president Lisa Borders told the Associated Press on Wednesday, “but expect them to comply with the league’s uniform guidelines.”

The WNBA’s decision to fine the women was met with criticism, especially given that NBA players led by New York Knicks forward Carmelo Anthony and other superstars have been calling for renewed social activism among pro athletes. After the 2014 death of Eric Garner, who died after a police officer put him in a choke hold in Staten Island, New York, superstars Lebron James, Derrick Rose, and Kyrie Irving, and members of the Brooklyn Nets, wore “I Can’t Breathe” shirts during warmups—no one got a fine. NBA Commissioner Adam Silver supported the players while noting that he preferred they “abide by our on-court attire rules.” (Just yesterday the NBA, in an unprecedented act of social activism by a pro sports league, punished North Carolina for its controversial workplace discrimination and transgender bathroom law by moving its lucrative All-Star game away from Charlotte.)

After the shooting at the Orlando gay nightclub that killed 49 people, the WNBA distributed T-shirts bearing a rainbow heart with the words #OrlandoUnited on them for a night. The Minnesota Lynx wore shirts with the words “Change starts with us, justice and accountability” for one game—prompting four off-duty police officers working the game to walk out. (The women did not receive a fine in that case.)

Here’s what some of the fined players had to say about the whole affair:

Liberty forward Tina Charles: (Charles wore her usual warmup shirt inside out while accepting the “Player of the Month” award prior to the game.) “I was just thinking, with what happened today in North Miami to the African-American male who was down just trying to help an autistic person out, when I heard about that news, I just couldn’t be silent. You know, just knowing my status, knowing the player I am representing this organization, if anybody was going to wear it, it had to be me. So for me, it’s just all about me continuing to raise awareness. I have no problem wearing this shirt inside out for the rest of the season until we’re able to have the WNBA support.”

“It’s not mutually exclusive. You also can support both” police and Black Lives Matter.

Liberty guard Swin Cash: “We really would appreciate that people stop making our support of Black Lives Matter, an issue that is so critical in our society right now, as us not supporting the police officers. There’s a lot of women in this room right now, and in the WNBA, that have family members who are in law enforcement, family who are in the military…The fact of the matter is, there is an issue at hand is, and as much as we can grieve and feel sorry for those families who are losing those police officers, we also have the right and the ability to also have our voice be heard about an issue that goes back even further than the deaths that have been happening lately. And so I think people need to understand that it’s not mutually exclusive. You also can support both things, but at the same time, this issue is important to us.”

Tanisha Wright: “More than 70 percent of this league is made up of African-American women, so that affects us directly. We need [the league] to be just as supportive of this issue as they were with any other issue: Breast cancer awareness, they support that. Pride, they support that. Go Green initiative, they support. So we want them to stand with us and support this as well.”

Indiana Fever’s Briann January: “Race is tough, it’s very tough, but when you go about it the right way and attack that issue with information and statistics and support for those people, there is not a fight here. We’re not here to put up a fight. We’re here to support a certain group. We’re asking for change. Every race deserves the right to be treated with respect and not be treated based on the color of their skin.”

Tanisha Wright: “We feel like America has a problem with the police brutality that’s going on with black lives…And we want to just use our voices and use our platform to advocate for that. Just because someone says black lives matter, doesn’t mean that other lives don’t matter…What we say is black lives matter, too. Period.”