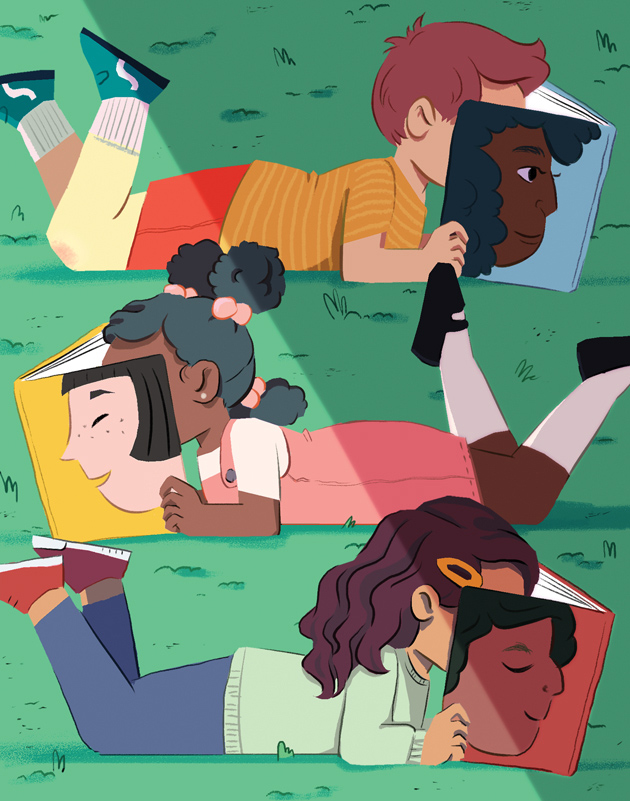 One afternoon last fall, I found myself reading my picture book The Sea Serpent and Me to a group of schoolchildren in the island nation of Grenada. The story is about a little girl who befriends a tiny serpent that falls out of her bathroom faucet. I had thought it would appeal to children who lived by the sea, but as I looked at their uncomprehending faces, I realized how wrong I was. It wasn’t just my American accent and unfamiliar vocabulary, but the story’s central dilemma: The girl wants to keep the serpent at home with her, but as each day passes, he grows larger and larger.

“What do you think she should do?” I asked, holding up an illustration of the serpent’s coils spilling out of the bathtub.

“Kill him and cook him,” one kid suggested.

It took me a few seconds to understand that he wasn’t joking. If an enormous sea creature presented itself to you, of course you’d eat it! Talk about first-world problems.

I think of that kid from time to time when I need to remind myself that my worldview is pretty limited. Within five years, more than half of America’s children and teenagers will have at least one nonwhite parent. But when the Cooperative Children’s Book Center at the University of Wisconsin-Madison looked at 3,200 children’s books published in the United States last year, it found that only 14 percent had black, Latino, Asian, or Native American main characters. Meanwhile, industry data collected by publisher Lee & Low and others suggest that roughly 80 percent of the children’s book world—authors and illustrators, editors, execs, marketers, and reviewers—is white, like me.

Writers and scholars have bemoaned the whiteness of children’s books for decades, but the topic took on new life in 2014, when the influential black author Walter Dean Myers and his son, the author and illustrator Christopher Myers, wrote companion pieces in the New York Times‘ Sunday Review asking, “Where are the people of color in children’s books?” A month later, unwittingly twisting the knife, the industry convention BookCon featured an all-white, all-male panel of “superstar” children’s book authors. Novelist Ellen Oh and like-minded literary types responded with a Twitter campaign—#WeNeedDiverseBooks—that spawned more than 100,000 tweets.

Most hashtag campaigns go nowhere, but Oh managed to harness the momentum. We Need Diverse Books is now a nonprofit that offers awards, grants, and mentorships for authors, internships aimed at making the industry more inclusive, and tools for promoting diverse books. Among the first batch of grant recipients was A.C. Thomas, a former teen rapper who sold her young-adult Black Lives Matter narrative in a 13-house auction. (A feature film is already in the works.)

The market for diverse books “can’t just be people of color,” says Crown Books VP Phoebe Yeh. “It has to be everyone.”

Problem solved? Not so fast. For years, well-meaning people up and down the publishing food chain agreed that diverse books are nice and all, but—and here voices were lowered to just-between-us volume—they don’t sell. People of color, it was said, simply don’t purchase enough children’s books. But after studying the market last year, the consumer research firm Nielsen urged publishers to embrace “multicultural characters and content.” Nielsen found that even though 77 percent of children’s book buyers were white, ethnic minorities purchased more than their populations would predict—Hispanics, for example, were 27 percent more likely than the average American bookworm to take home a kids’ book. Yet the market for diverse books “can’t just be people of color,” says Phoebe Yeh, the Chinese American VP and publisher at Crown Books for Young Readers. “It has to be everyone.”

In an essay this spring, the book-review journal Kirkus revealed that its reviewers had started mentioning the race of main characters in young-adult and children’s books. The goal, its editor wrote, was to help librarians, bookstores, and parents find stories with diverse characters—and to challenge the notion of white as the default. Many applauded the move, but others were incensed, among them author Christine Taylor-Butler. For The Lost Tribes, her book about a kid who discovers his parents are aliens, she and her editor consciously chose not to reveal upfront that her main character (like her) is black. Highlighting the race of a nonwhite protagonist, she believes, will lead many buyers to conclude that the book isn’t for them—or the children they cater to.

Last year, after Kwame Alexander’s The Crossover won the Newbery Medal and Jacqueline Woodson’s Brown Girl Dreaming was selected as one of the two runners-up, a white school librarian named Amy Koester blogged about the sotto voce grumbling she heard from other librarians who felt these books, with their black protagonists, would be a “hard sell” in their white districts. “If we argue that only black youth will want to read about black youth,” Koester countered, “we are really saying that the experiences of black youth have no relevance or meaning to youth of any other race.”

The biggest threat to literary diversity, says author Christine Taylor-Butler, is the “feeling that it is okay to destroy people on social media.”

Color-coding our bookshelves doesn’t just shortchange the black kids. It is well established that reading literary fiction enhances our empathy and our ability to gauge the emotions of others, so what happens to white kids who are raised solely on stories about white kids? Economists note that the ability to grasp the perspectives of people who don’t look like us is increasingly crucial in a nation riven by race and growing more heterogeneous by the day. In a recent TEDx Talk, Chinese American author Grace Lin recalled hearing from a school librarian whose students stopped teasing an Asian classmate after they read Where the Mountain Meets the Moon, Lin’s adventure story starring a Chinese girl named Minli. The book, Lin said, had made being Asian “kind of cool.”

Ellen Oh, the Korean American founder of We Need Diverse Books, points out that librarians don’t fret over whether kids will relate to a title like The One and Only Ivan, told from a gorilla’s perspective, yet faced with a book about a Chinese kid, the literary gatekeepers—from agents all the way down to parents­—may balk. “Some of our most popular books deal with worlds that aren’t Earth and people who aren’t human,” Oh says. “But the people you walk beside on this Earth have stories too.” To complicate matters, a shrinking publishing world has consolidated its marketing budgets. “Readers are led by publishers into fewer and fewer books,” observes Kevin Lewis, a black picture-book author who spent 23 years as an editor at major publishing houses. The result, he says, is that publishers often use a single narrative to represent an entire group’s experience. 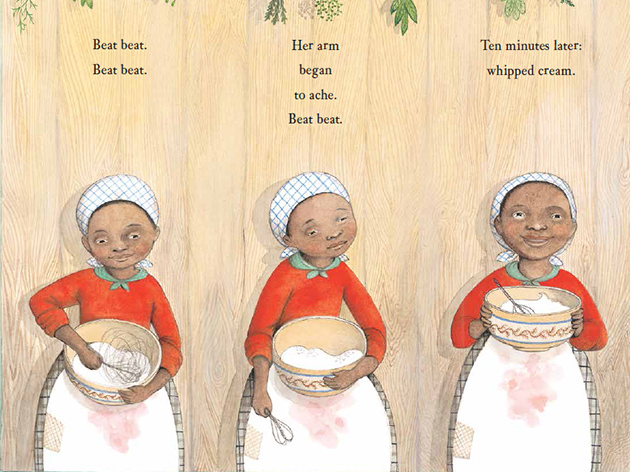 A page from A Fine Dessert by Emily Jenkins, illustrated by Sophie Blackall

This puts intense pressure on authors to get it exactly right, even though nobody can quite agree what that means. Over the past year, the creators of two picture books were harshly criticized for their failure to convey the grim brutality of slavery. A Fine Dessert, written by Emily Jenkins and illustrated by Sophie Blackall, both white, showed the same dessert (blackberry fool) being made at different times in history. The book received standout reviews, but after it was eviscerated on social media for its portrayal of a slave woman and her daughter serving the dessert on a South Carolina plantation, a contrite Jenkins donated her writing fee to We Need Diverse Books. (Blackall stood by her work.) 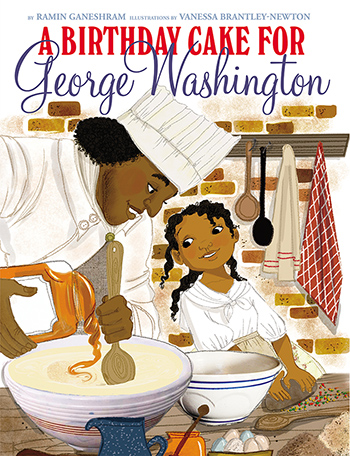 Scholastic recalled this picture book amid criticism that it glossed over the horrors of slavery.

A Birthday Cake for George Washington—written by Ramin Ganeshram and illustrated by Vanessa Brantley-Newton, both women of color—told the story of Hercules, the late president’s enslaved household cook, but glossed over the horrors of captivity and consigned to an author’s note the fact that Hercules eventually ran away (on Washington’s birthday, no less). In the face of internet outrage (#SlaveryWithASmile), Scholastic made the controversial choice to recall the picture book, because “without more historical background on the evils of slavery than this book for younger children can provide, the book may give a false impression of the reality of the lives of slaves.”

(Since this article went to press, two more books—by award-winning children’s authors—have been subject to allegations of racial insensitivity. Lane Smith’s There Was a Tribe of Kids was viewed by some observers as demeaning to Native Americans. The other title, When We Was Fierce, by e.E. Charlton-Trujillo, initially drew high praise, only to have its publication date pushed back indefinitely in response to online outcry.)

Some diversity advocates fear that the vitriol of the internet attacks will give pause to skittish writers and publishers. “For me, the biggest issue is the chill on diversity that is happening because of the feeling that it is okay to destroy people on social media,” Taylor-Butler told me. “We have lost the perspective that these are books and they are going to be imperfect.”

The questions roiling the children’s publishing world are among the pressing cultural questions of our time: Whose story gets told, and who gets to tell it? How do you acknowledge oppression without being defined by it? And to what extent should writers bow to popular opinion? There are no simple answers. But what seems clear to me, as a writer struggling to find the best way to tell stories to kids, is that my inevitable mistakes are well worth making. Children, it turns out, are the best critics of all. They read carefully and passionately, and when they sense you have missed an essential aspect of the story, they will be more than happy to point it out to you.