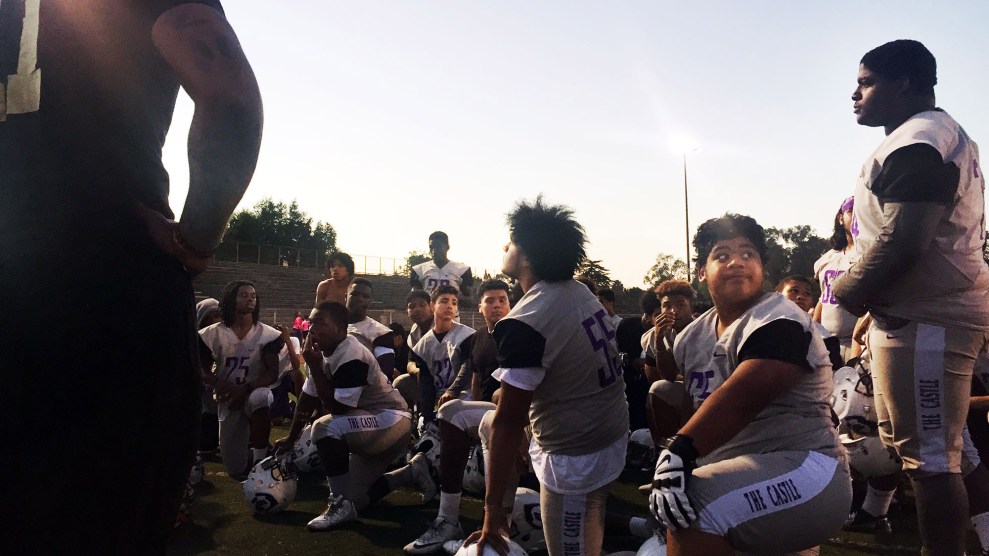 When Edward Washington became the head football coach at Castlemont High School in East Oakland three years ago, he struggled to even field a team. The school, tucked away in an impoverished, predominantly black and Latino neighborhood, hadn’t won a game in four years. “I don’t give a damn about football, man,” Washington said. “It’s about your life. It’s about care. It’s about making sure that you as a young man are where you want to be.” 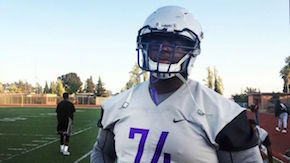 Why My High School Football Team Protested During the National Anthem

On a chilly Thursday night in late September, some 40 players from Castlemont’s JV and varsity teams gathered in front of him on the field behind the school. Some, like senior nose guard Jadan Starks, stood, while many took a knee. It was just after 7 p.m., and the cheerleader chants, teenage chatter, and booming hip-hop from earlier in the evening had mostly quieted down.

It had been a week since the team, joined by San Francisco 49ers quarterback Colin Kaepernick, made national headlines by staging a dramatic national-anthem protest before one of its games. A photo of a kneeling Kaepernick—alongside Castlemont players and coaches lying on the ground, their hands in the air—quickly went viral. Ever since the Knights joined the Kaepernick-led movement of athletes speaking out against racial injustice and police brutality, they had been both praised and criticized—and Washington wanted to check in with them about some of the attention they’d been getting of late.

Kaepernick came to Oakland, CA. He kneeled on one knee, players laid on their back with hands up during the Anthem. pic.twitter.com/Cae4sTopac

Earlier that day, players had met with Oakland Unified School District Superintendent Antwan Wilson, who Washington said had offered his support. While Washington applauded the players’ work at the meeting, he cautioned them to “read in between the lines” when they hear officials speak—especially during an upcoming meeting with Oakland Mayor Libby Schaaf and California Lt. Gov. Gavin Newsom. “Best believe, Gavin Newsom, he’s going to come here and talk to y’all about gun control,” Washington said. “He’s going to say, and Mayor Libby Schaaf is going to say, ‘We need gun control on our streets.’ Bullshit. This has nothing to do with laws…We asking for these people to be prosecuted. Period.”

Castlemont’s first anthem demonstration came on September 16, when players and coaches knelt and raised their fists in the air before a game against Cochrane High School from Alberta, Canada. Afterward, when Washington saw that Kaepernick had retweeted a photo of the Knights, he reached out to the 49ers quarterback about meeting up with his team. The following Wednesday, Kaepernick told him he wanted to talk with the players at their next game in Sunnyvale, California.

The Castlemont Knights during the National Anthem before last Friday’s football game in Oakland: pic.twitter.com/AJvsP3maDR

Washington kept quiet the next two days. On September 23, Castlemont arrived at the visitors’ locker room in Sunnyvale hours before the game. Washington gathered the players as they dressed. Then he called in Kaepernick. The quarterback stood in the center next to Washington, surrounded by the teenagers, encouraging them to look out for one another. “Everything you do matters. Lift each other up,” Kaepernick told them. “The same way y’all took a stand and stood with me, I had to come out here and stand with y’all. I love y’all. Y’all my brothers, and I’m here with you.”

Then, while a Kings Academy senior sang the national anthem, the Knights placed their helmets onto the turf, dropped to their knees, rolled onto their backs, and lifted their arms toward the sky. Kaepernick knelt. On the opposite sideline, the Kings Academy players stood at attention, facing a video board image of a waving American flag. When the anthem finished, the members of Kings Academy raised their helmets in unison. The Castlemont kids lifted themselves up and picked up their helmets.

Growing up in East Oakland, a place Washington calls “homicide territory,” Jadan Starks said he and his teammates feel the tension just from heading home at night after practice. When Starks was younger, he’d see police break up fights in his neighborhood and rush home, worried about what might happen if he stood around as a bystander. “I was scared,” Starks said. “I thought I was either going to jail or get beat by the police. We got players on the team that have been walking to the store, and then just randomly get stopped by the police and just get harassed and barraged with a whole bunch of questions.”

His teammate William Perkins said he worries about his little brother. When the senior defensive back looked at the most recent police shootings in Tulsa and Charlotte, he saw himself, and people in communities like his own. Recently, while Perkins was walking to a store after practice, he said he was stopped and questioned by police. “When you see that and I see the police, it’s a fear that comes to you because you don’t know what could happen or what he could do to you,” he said.

Having Kaepernick by their side, Starks and Perkins said, has let them hope that their protests might make a difference. “When we originally did it, I didn’t think that it would make it out that far,” Perkins said. “When [Kaepernick] showed up, I thought we could actually make a change and it would actually mean something.”

“It was fucking powerful,” said Washington, who’s joined with his coaching staff in wearing dashikis as a sign of black pride since the Kings Academy game. “They’re standing up for something. How can anybody be against that?”

Back at the field, a whistle broke through the air. Washington told the team that Kaepernick was planning on coming back for another game, but he wouldn’t say exactly when. With an eye on Friday’s game, he told them, “If anybody here got food issues at the crib, talk to me, and I’ll make some shit happen. I’m serious.” After the team wrapped up and jogged to the locker room, Washington walked over to assistant coach Benjamin Arnold and told him he needed to buy food for one of the players.

Afterward, I asked Washington if he thought the team’s protests would continue. It’d require playing the anthem, he said, and he didn’t think the DJs who work Castlemont’s games weren’t likely to add the Star Spangled Banner to their playlists any time soon. “In Oakland,” Washington said, “we don’t play the national anthem.”