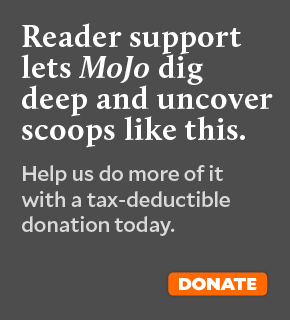 The allegations, summarized in a memo that a former foreign intelligence official passed to the FBI last summer, were not new. They were first reported by MoJo‘s David Corn on October 31. That was, to state the obvious, eight days before the election; it was also three days after FBI Director James Comey announced that the bureau had discovered what might be a new batch of Hillary Clinton’s emails. Though those emails hadn’t yet been reviewed (and turned out to reveal nothing) Comey thought they were significant enough to bring them to the world’s attention. He did not make a similar announcement about this other trove of information. Make of that what you will.

Nor, it should be noted, did the rest of the press devote even a fraction of the attention it lavished on the email announcement to the Russia story; some even speculated that a batch of Russia-related stories that broke that day had to be the result of an “oppo dump,” suggesting that the journalists were covering this issue simply because Clinton forces were pushing it. (This assumption is still poisoning the debate, but that’s for another day.)

Let’s be absolutely clear: David’s story was the result of enterprise reporting and fact-checking. Mother Jones did not choose to publish the memos themselves or detail the specific allegations because we were not able to independently verify them. (As David noted on Twitter, “even Donald Trump deserves journalistic fairness.”)

Sorting the press into “good” and “bad” is a tried-and-true tactic of media manipulation.

What we were able to verify, though, was that the former intelligence professional was who he said he was, that he had the respect of many others in his field, that he’d taken his information to the FBI, and that the bureau had followed up.

That an authoritarian foreign power might be seeking to compromise the next president of the United States was news, and it deserved further investigation by the FBI as well as the press. (Mother Jones will definitely stay on the beat—just a few hours ago, David published his latest scoop on this matter.) That neither institution drew sufficient public attention to it may prove to be an error of historic consequence. But that moment has passed. Now, with Trump taking office as the 45th president, the urgent task is to learn from it.

One lesson is that fearless, independent reporting is more critical than ever. If you believe that, consider supporting our nonprofit newsroom. Your donation goes directly to the work that David and his fellow reporters and editors do every day.

Another lesson is that journalists’ reflexive instinct to undercut or ignore each other’s work—standard competitive point-scoring in a normal environment—may have a cost. Because we are no longer in a normal environment. That was chillingly demonstrated in Trump’s response when the Russia dossier story finally became blew open last week.

First came those tweets calling it fake news—a term, don’t forget, that came into use to describe made-up stories intended to boost Trump. (Trump isn’t alone with this rhetorical sleight of hand. Lots of people, on the right and the left, now use “fake news” as a synonym for “news I disagree with.” That’s a perversion of the concept.)

Then, with the press corps assembled at his tower the next morning, Trump sent out his spokesman and his vice president to slam and humiliate the outlets that had made the story big news again, lumping together CNN, which had been careful not to publish the memos or details, and BuzzFeed, which had made the controversial choice to run the documents in full. “Sad” and “pathetic” were some of the kinder terms used.

Finally, Trump went in for the kill. He called BuzzFeed a “failing pile of garbage.” He refused to take a question from CNN’s Jim Acosta, calling CNN “fake news.” His spokesman later told Fox News that he would “remove” Acosta if he demanded the right to ask a question again.

This response deserves a little unpacking, because it is a dry run for what we can expect going forward. In just a couple of tweets and a handful of comments, Trump sought to (a) discredit all of the press for the decisions of some; (b) neutralize a term that describes, in part, propaganda ginned up by Moscow to help his candidacy; (c) use that term to dismiss a story of enormous concern to the public; and last but not least, (d) play a divide-and-conquer game with the press itself.

The president-elect had started the news conference by complimenting some news outlets (that he did not name) for the “professional” manner in which they handled the Russian intelligence story. But then, as Acosta asked him to “give us a chance to ask a question, sir,” he shook his head: “Not you. Your organization is terrible. Quiet!”

You deserve a Fourth Estate that goes exactly where powerful people don’t want it to go.

Sorting the press into “good” and “bad” is a tried-and-true tactic of media manipulation. It aims to push reporters to conduct themselves in a way that will land them on the good list, to be rewarded with access, and to fear ending up on the bad list that may come in for punishment and exile. Quiet. Or else.

(What that punishment could look like is already becoming apparent, with Trump demanding that Congress investigate NBC’s decision to report a leak of another element of the Russia story.)

The president-elect and many of his supporters have long made clear their contempt for reporters who pursue inconvenient stories. When they impugn real reporting as “fake news” and use that slur to dodge vital questions, it’s an attack on all journalists—and on the audience. On you.

As citizens, as participants in democracy, you deserve journalists who ask hard questions and refuse to back down when the president tells them to shush. You deserve a press that doesn’t wave off conflicts of interest and possible ties to foreign autocrats as just another wrinkle in the who’s-up-who’s-down of political competition. You need a Fourth Estate that goes exactly where powerful people don’t want it to go.

But the economics of media are such that we are not assured that kind of watchdog press unless we build an alternative to a model where newsrooms are owned by entertainment corporations and financed by cheap advertising. Those corporations and advertisers have lots of interests; a vigorous and unrestrained press is not necessarily the first one. If you sign up as a sustaining donor to Mother Jones, you become part of building the alternative.

Journalists don’t always talk about the backstory to our reporting, and that’s been to our disadvantage. Here at MoJo, we have been seeking to jump-start that conversation with our series of articles on the media business and our own campaign to build a reader-supported model. In the coming year, we hope to roll out more ways for you to participate in that conversation, and in the journalism itself. But don’t be shy to jump in right now: What did you think of how Trump characterized the press? Do you think MoJo should have published the Russia memos? Tell us in the comments, on Facebook, on Twitter, or by sending us an email.

P.S. Just have to add this other bit of news that broke just as we were about to publish: Mother Jones has been nominated for three National Magazine Awards (the Oscars of our industry), for general excellence, reporting (for Shane Bauer’s prison investigation), and Magazine of the Year. That’s a huge honor to the insanely hard-working team here—and to you, our readers, who make it all possible. Thank you.