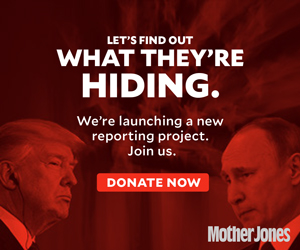 For a while there, it almost seemed as if President Donald Trump’s determined efforts to redirect attention from the Russia scandal were starting to work. The White House had pushed back against every attempt to investigate, and congressional Republicans, from the soap-opera-worthy antics of the House’s Devin Nunes to the slow-walking of the Senate’s Richard Burr, were going along. Democrats had their hair on fire about health care, and a big tax-cut showdown was looming.

And then Trump fired the FBI director—and made it plain for everyone that the Russia story really does represent a serious threat to American democracy. Because now it’s no longer just about how exactly the Kremlin interfered in the 2016 election, or whether Trump or his associates merely winked and nodded or actively colluded. It’s about whether the public’s right to know the truth is stronger than a powerful man’s burning desire to keep it hidden.

For many decades, from Teapot Dome to Watergate to Lewinskygate, the answer to that question has been, ultimately: yes. Yes, the people deserve to know; yes, political advantage must yield to the search for truth. It is essential that the answer, this time, be the same. As Dan Rather—a man who has watched many administrations try to lie to the public—put it, the alternative is “Armageddon for our form of government.”

To be clear: We can’t, and shouldn’t, assume that where there’s smoke, there’s fire. But at this point, that doesn’t matter. What Trump or any of his associates did in 2016 may or may not have been a scandal, but blocking the public from finding out most definitely is. Trump may turn out to have overreached with the Comey firing, prompting the kind of independent inquiry he was so desperate to avoid. But it’s evident that Republicans on Capitol Hill—terrified of what such a probe would do to their agenda and their electoral prospects—will do everything they can to avoid going there.

That means it’s up to the public—all of us—to make sure truth prevails over power. There are many ways of doing that, from showing up at town halls to calmly reasoning with friends or relatives. For us, as journalists, the call to action is an especially urgent one: We need to deploy every skill we’ve learned, from shoe-leather reporting to data dives. We need to go deep, stick with the story no matter where it leads, and resist getting tangled in conventional wisdom or distracted by sideshows.

Mother Jones was born out of a similar moment, in the post-Watergate years when it became clear that the public needed independent watchdogs. Going after what powerful people want hidden is what we exist to do. We did it in 2012, when David Corn revealed the story of Mitt Romney’s 47 percent remarks; we did it last year, when Shane Bauer reported on his time as a guard inside a private prison. We are scrupulous in our fact-checking, and in protecting our sources, too. (Whistleblowers take note: You can send us secure messages on Signal at (202) 809-1049, or email us at scoop@motherjones.com.)

And so, right now, we’re going to double down. We are launching a new project to investigate the Trump-Russia question, and we hope you’ll be part of it. We’re looking to sign up 1,000 new sustaining donors with a tax-deductible donation of $15 a month to help make it happen. (We’d be grateful for one-time gifts, too.) There’s even a matching gift (and details below) to boost your impact.

(Update, May 15: WOW! We hit our goal and raised $15,000 in new monthly donations—plus $100,000 in one-time gifts—in just over 72 hours. That’s amazing—and we’re going to keep going, because it shows just how much you expect us to take on with this work and how fired up you are about getting to the truth. Your support won’t be matched anymore, but it will help us find out what they’re trying to hide.)

Why, you might ask, the extra push on an issue that many others are now covering? Because the past year has shown that even when lots of journalists are on the same beat—back then, it was the presidential campaign—the news ecosystem is not necessarily built to expose the most challenging stories. Here’s an example: In October, Corn was the first and only reporter to break the explosive news that a former British counterintelligence officer had assembled memos containing allegations that Moscow had tried to co-opt and compromise Trump, and that the FBI was interested in this material.

We now know those Russia memos are at the heart of the biggest scandal yet for an administration that, scandal-wise, has set a high bar. Yet it wasn’t until January that others were willing to touch the story. The New York Times‘ public editor, Liz Spayd, wrote a column about how the Times had known about the memos before the election and had even drafted a piece about them—but then killed it. In retrospect, she said, MoJo‘s approach presented a “model” for other newsrooms.

Trump was able to fend off the Russia story for much of the campaign because he exploited Washington’s—and political journalism’s—tendency to coalesce around a he-said-she-said storyline. In this sense, his attacks on media worked: He was able to characterize a genuine scandal as partisan mudslinging, and suggest that to pursue it was to carry water for Hillary Clinton. The Obama administration, as we now know, feared being painted with that brush. So did James Comey. So did many in the press.

This story will move forward only if journalists expose what politicians are hiding.

Journalists’ tendency to recoil in the face of such attacks has waned a bit with Trump ratcheting up his “enemy of the people” venom. But it’s also becoming clearer than ever that the story of foreign influence and corruption has barely begun to be told. Take the not-so-subtle signals  from the few people on Capitol Hill who have access to top-secret intelligence briefings. Sen. Ron Wyden (D-Ore.), who happens to be the son of an investigative reporter, recently told MoJo, “There is a big gap between what the public had a right to know and what came out. And that continues to be true to this day.” Wyden’s California colleague, Sen. Dianne Feinstein, says that if the public had known what she knew about Trump and Russia, the election would have turned out differently: “I deeply do believe that.”

Feinstein and Wyden can’t disclose the intelligence they’ve seen. And the White House and its allies are evidently determined to make sure no one else does either. That means this story will move forward only if journalists expose what politicians are hiding—and journalists can only do that when they have the time, and space, to go deep. (We went into why the current media business model is weighted against this sort of reporting here.)

This story is about identifying the most vulnerable spots in our democracy and how they can be exploited by forces both foreign and domestic. (Here’s a non-Russia example on the corruption beat: Our colleagues Russ Choma and Andy Kroll were the first to report on a Chinese American businesswoman who paid $15.8 million for a penthouse in Trump’s Park Avenue building. She makes her living connecting people with the “princelings” of the Chinese political elite and has ties to a Chinese military intelligence front group. Why is someone connected to a foreign spy service putting nearly $16 million into the president’s pocket?)

In addition to digging into conflicts like these, we’re aiming to help you sift through the chaos of the daily headlines. We’ve put together a constantly updated Russia-Trump timeline, and we’re launching a newsletter, The Russia Connection, that will deliver the most important stories on this beat—not froth, fluff, or speculation—once a week. We’re thrilled to announce that it’s being put together by Bill Buzenberg, the former news director of National Public Radio and former head of the Center for Public Integrity. You can sign up for it here.

It will take more than $500,000 to fund this project, which will include reporters, fact-checkers, editors, researchers, multimedia work, and legal review. The Glaser Progress Foundation has donated $200,000 to kick-start things, and when we raise the rest of the funds, it’ll pitch in another $50,000. That’s where readers like you come in—for every new donor at the $15-a-month level, the foundation will donate $50 until we hit 1,000 donors or $50,000 in matching funds. (And that’s a genuine commitment, on paper—not a gimmick like some of the “QUADRUPLE MATCH!!!” offers that clog your mailbox.)

(Update: Wow again! The huge response from our readers also motivated two additional donors to step up with $50,000 and $25,000 donations, respectively, to fund our reporting on Trump and foreign influence, corruption, and cronyism. They were inspired by how many people were pitching in and decided to dig deep. So you stepped up, these major donors stepped up, and now we’re going to step up. To be completely honest, we weren’t sure how you, our readers, were going to respond to the idea of doubling down on this beat. But now we know you think it’s enormously important—and that you want us to go as hard as humanly possible. So we’ll commit to putting even more resources into it: Any additional funds raised in this campaign will go into this reporting project. However you choose to participate—with a sustaining gift, a one-time donation, or by sharing this appeal and our stories across your social circles—there’s one thing we already know: Mother Jones readers are an amazing community. You have already made this the most successful US journalism crowdfunding campaign ever (that we are aware of—if you know of a bigger one, we’d love to hear about it, so please flag in the comments). Readers like you, along with the take-no-prisoners reporters in our newsroom, can get anything done. Let’s see how far we can go!)

This kind of reporting is going to take time and persistence. It’s going to require going down a lot of rabbit holes and spending quality time with stacks of documents—day after day, month after month. So please help send us down those rabbit holes. Join us as a sustaining donor with a tax-deductible monthly gift. (If you’re not ready to pitch in monthly, we’d be grateful for a one-time donation too!)

This story may not be in the headlines every day like it was this week, but it won’t get any less important. “When we look back at Watergate, we remember the end of the Nixon presidency,” as Dan Rather puts it. “It came with an avalanche, but for most of the time my fellow reporters and I were chasing down the story as it rumbled along with a low-grade intensity. We never were quite sure how much we would find out about what really happened. In the end, the truth emerged into the light.”