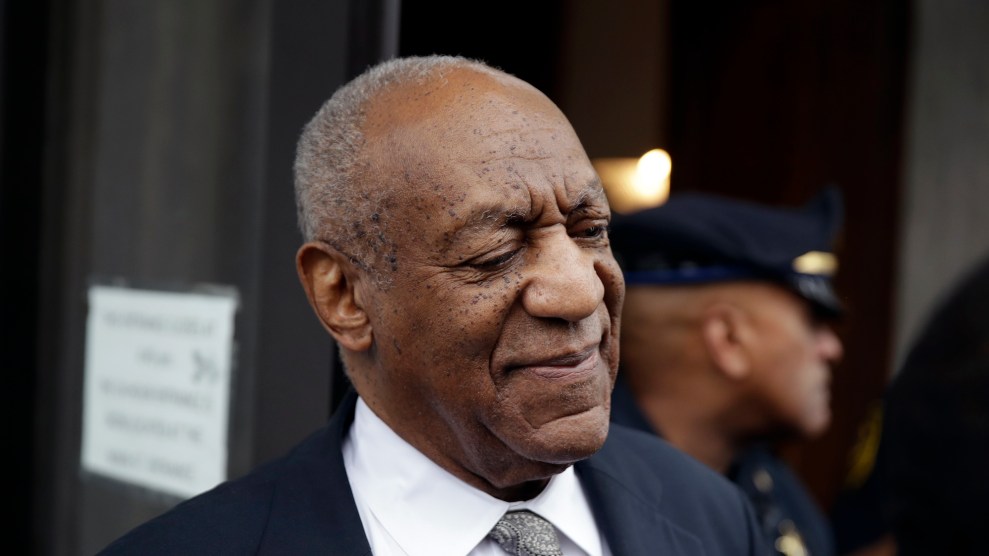 Bill Cosby exits the courthouse after a mistrial was declared in his sexual assault case.Matt Rourke/AP

Update, June 28: Bill Cosby is disputing his publicist’s claim that he planned to hold a speaking tour about sexual assault. “The current propaganda that I am going to conduct a sexual assault tour is false,” he said in a statement to ABC News. “Any further information about public plans will be given at the appropriate time.”

Four days after a judge declared a mistrial in Andrea Constand’s sexual assault case against Bill Cosby, the 79-year-old comedian wants to “get back to work”—teaching young people about the threat of being accused of sexual violence, Cosby representatives said on Wednesday.

Andrew Wyatt, Cosby’s publicist, and Ebonee Benson, a spokeswoman for Camille Cosby, told Good Day Alabama host Janice Rogers that Cosby was planning town halls for youth starting this summer. “This issue,” Wyatt said, “can affect any young person, especially young athletes of today. And they need to know what they’re facing when they’re hanging out and partying.”

It’s clear that the issue in question isn’t sexual assault itself, which studies have shown to affect as many as 1 in 5 college women, but rather the danger that young men (and even “married men,” Wyatt laughed) could be falsely accused. “People need to be educated on a brush against a shoulder—anything at this point can be considered sexual assault,” Benson chimed in.

More than 50 women have accused Cosby of sexual violence, with many of the stories following the same pattern: Younger women claiming that Cosby drugged them before the alleged assaults. Prosecutors in the Constand case have vowed to retry him.

Bill Cosby Is Apparently Planning to Teach Young Men How To Avoid Sexual Assault Accusations, Because the World Is a Terrible Place.