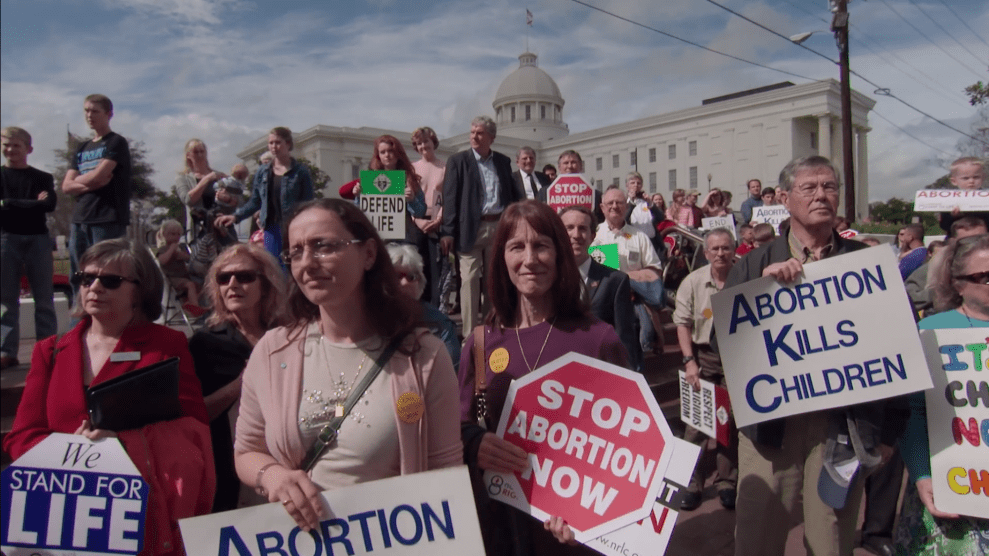 Civia Tamarkin wanted to make a film about reproductive rights, but she knew it had to transcend the familiar abortion debate. A veteran criminal justice reporter and two-time documentarian, she was aghast at the Supreme Court’s 2014 Hobby Lobby decision, which rolled back women’s access to low-cost contraceptives. So Tamarkin jumped into the fray: Birthright: A War Story, in selected theaters starting this month, tells “the real-life Handmaid’s Tale“—of women jailed for smoking marijuana while pregnant, pressured to undergo c-sections against their will, or forced to risk their lives by carrying nonviable pregnancies to term. The film elegantly weaves the history of “pro-life” advocacy with stories of women who have suffered at the hands of their doctors and the system—collateral damage, as it were, of a movement seeking to limit reproductive health care. In the process, Tamarkin talks candidly with some of the movement’s shakers, from Arizona Republican Rep. Trent Franks to the founder of Personhood USA, providing an inside look at the logic and tactics of powerful abortion foes.

Civia Tamarkin: I am of the generation that was very involved in Vietnam protests and women’s rights and civil rights protests. On the heels of the Hobby Lobby decision I was absolutely shocked, angry, and in disbelief that the Supreme Court could allow a private corporation to determine whether women would have access to birth control through their insurance.

MJ: I was impressed by your access. You talk to women who have gone through really private and sensitive experiences where they’ve been punished and, in some cases, had their lives threatened by conservative policies. You also talk to conservative politicians responsible for those laws. How did you get them all to talk so openly?

“Women who had been victimized by the system were very afraid and embarrassed.”

CT: It was very difficult. Women who had been victimized by the system were very afraid and embarrassed. Like many victims, they did not want to relive the experience. In some cases, there were lawsuits where their attorneys did not want them to speak. Doctors were afraid of being ostracized or having repercussions within their practice or their hospital affiliation.

Among the National Right to Life people, some of them certainly did not want to talk, but [president] Carol Tobias was very receptive. We always said this film is about tracing the evolution, the strategy and the impact of the right-to-life movement. She stated their case. She was very helpful in giving us access to their youth camps, which they’re very proud of—as they should be. They’ve been training an army of foot soldiers for 30 years or more.

MJ: I was struck by Congressman Trent Franks’ statement comparing the anti-abortion fight, basically, to the Civil War—that he sees himself, in some ways, as fighting this very real war, and that last time we were doing this, people were killed.

CT: In fairness, I don’t think he was aggressively portraying himself as a warrior. I think what he was trying to say is that this country is divided over the issue. Which is interesting, because if you look at polls, the majority of the country supports women’s right to determine their own medical decision.

MJ: You focus on women who are criminalized or otherwise become collateral damage in the battle Franks describes, but you also spend a lot of time taking viewers through the history of the abortion fight since Roe vs. Wade.

CT: It’s very important to understand the context. You have to understand how [abortion foes] were building the machinery that allowed this to happen. I felt the history was important for a generation—college students, women in their 20s or early 30s who just assume they will have access to contraceptives, access to abortion—and that it’s protected by the Supreme Court. They don’t understand it’s state by state by state. This can be nibbled away, because the notion of what is an “undue burden” is so broad.

MJ: And yet nearly all of the women in your story are criminalized not for abortion, but for other things related to their pregnancies.

“The issue goes far beyond just abortion…This is a human rights issue.”

CT: Right. Behavior that is deemed harmful to the fetus. The issues of reproductive justice and of a woman’s right to bodily autonomy have been bogged down by the battle over the specifics of abortion. I wanted to move away from the traditional lexicon. A word like “choice” has been diminished and marginalized over the years and conveys too cavalier a notion. We all make choices dozens of times a day. At the same time, opponents have been using such emotionally laden jargon—like “Holocaust” and “genocide”—that I felt that a woman’s right to bodily autonomy, bodily integrity, and medical decision-making needed to be elevated to that level and portrayed as human rights.

The courts have established that an individual cannot be forced to sacrifice any part of their body for someone else’s medical well being. You can’t be forced to be a donor. You cannot be forced to give blood or bone marrow or anything else. It’s an issue of people needing medical care and being sent to a Catholic hospital where the Conference of Catholic Bishops establishes guidelines—and that doesn’t just affect women. It affects men. It affects families. It affects end-of-life as well: Will they honor a do-not-resuscitate order? The issue goes far beyond just abortion—this is a human rights issue. It’s not as simple as “choosing.”

MJ: What did Franks and Tobias think about all of that?

CT: Tobias says she believes those medical reports that say contraceptives are harmful to a woman’s health, abortion is harmful to a woman’s health. Now, no one in the established medical community agrees with that—neither the American Medical Association nor the American College of Obstetrics and Gynecology. [Tobias and Franks] believe scientists who are using what many call “junk science” to further their claims. Franks will say that he certainly doesn’t think the mother’s life should be put at risk, but by the same token he does recognize the fetal pain and so on.

MJ: And on the flip side? How do women like Katie Darovitz, who was jailed in Alabama and charged with chemical endangerment for using marijuana during her pregnancy, feel about you connecting her story to the issues of abortion and human rights?

CT: I think she is beginning to see it in the broader context. I don’t think, when it happened to her, that she understood it. But I think she has become aware subsequently of how it does all fit in the overall scheme of things.

See the Birthright film website to view the screening schedule or to help set up a screening in your area.