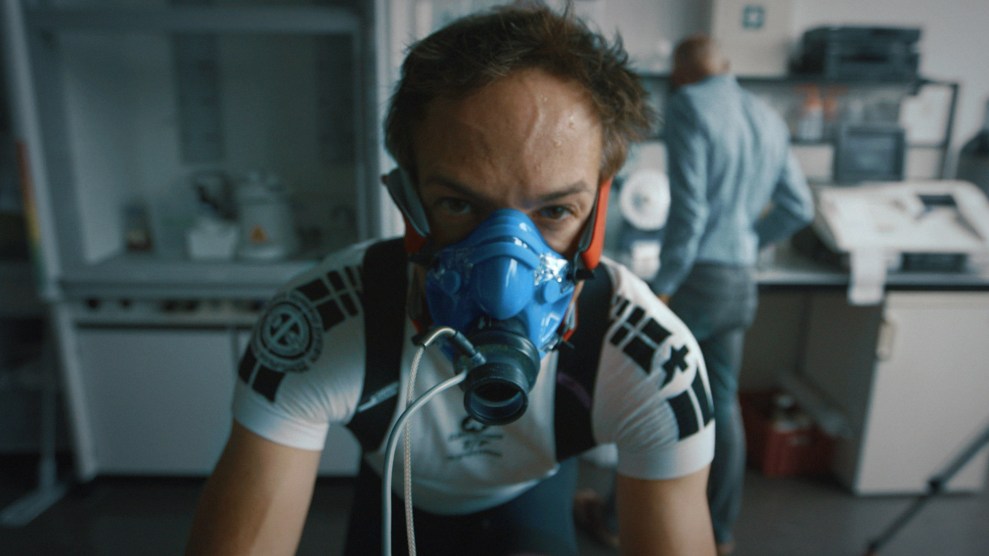 It began as an amateur cyclist’s experiment. Filmmaker Bryan Fogel wanted to learn the ins and outs of doping by using performance-enhancing drugs himself, and so he sought out the advice of high-level anti-doping officials on how to do so. But through his correspondence with Grigory Rodchenkov, the former head of Russia’s Olympic anti-doping lab, Fogel soon found himself ensnared in one of the biggest drug scandals in international sports history.

In Icarus, set for release Friday, Fogel chronicled his journey from doping guinea pig to whistleblower protector. When the 44-year-old first decided to use performance enhancers, he sought help from Dr. Don Catlin, an outspoken anti-doping scientist and the founder of UCLA’s Olympic Analytical Laboratory. Catlin didn’t want to be involved, but he did suggest that Fogel get in touch with Rodchenkov.

“He said, ‘Hey, I know this guy in Russia. He’s a character. He might help you,'” Fogel recalled. So, three months after Russia’s dominance at the Sochi Olympics (a country-high 33 medals, including 13 golds), Fogel connected with Rodchenkov. At the time, Fogel had no clue that the eccentric Russian had been overseeing a long-standing, elaborate state-sanctioned doping program—or that Rodchenkov would soon become the key figure in its exposure.

A year later, in May 2016, Rodchenkov blew the cover off years of Russian doping in a series of New York Times interviews that Fogel arranged. Rodchenkov had developed a cocktail of banned substances and liquor to give to Russian athletes and provided the Times with a spreadsheet with the names of athletes involved in the program. Members of Russia’s intelligence unit, he explained, had worked with anti-doping experts to replace dirty urine samples with clean ones collected long before the Games. As a result, no Russian athletes tested positive for doping during the Sochi Olympics.

Rodchenkov estimated that up to 100 dirty urine samples were tossed out. A later independent report from the World Anti-Doping Agency found that 1,000 Russian athletes from 30 sports in several international competitions were involved in or benefited from the program. Russian officials had repeatedly denied the allegations of an institutional conspiracy until December 2016, when the acting director of the nation’s anti-doping agency conceded the case to the Times, claiming that top government officials were not involved.

We spoke to Fogel about the international sports world’s response to the Russian doping controversy, his bond with Rodchenkov, and what the whistleblower is up to now.

Mother Jones: What was the initial idea for this documentary?

Bryan Fogel: The original idea was to explore firsthand as a guinea pig essentially whether or not the anti-doping system in sport worked and also my own curiosity as to what exactly these “performance-enhancing drugs” do. As a fan of cycling and sport, it’s constantly in the media that this person has doped and that person has doped. But I felt, from an audience perspective, that society doesn’t understand what this is and isn’t.

I was a huge fan of Lance Armstrong. The only way that they got him was through a criminal investigation where they got all of his teammates who did the exact same thing that he did and got away with it to rat him out in exchange for their own immunity. The byproduct of that was that he had passed 500 anti-doping controls clean. So I’m going, “Wait, wait, wait. It’s not, ‘What’s wrong with Lance Armstrong?’ What’s wrong with this system that was thoroughly ineffective to catch someone cheating for the last 15 years?”

MJ: What was going through your mind at that time when Grigory told you about the German television documentary alleging his involvement in Russia’s state-sponsored doping program?

BF: I knew I had to let the investigation go where it was going to go. That was out of my hands, and I didn’t want to be the one investigating him. I liked him. He was a friend. I certainly couldn’t have ever imagined the size and scale of what Grigory had been involved in and what he was overseeing, which was just mind-blowing to me once I began to understand what this is—and also frightening. He was the equivalent of Russia’s Snowden. He has this explosive game-changing, sport-changing, world-changing evidence that he wants to bring forward and essentially me and my film team are going to facilitate him doing that. That was a huge burden. It felt like a moral and ethical obligation, and there were so many potholes on that road to navigate to see to it that he could tell his story.

MJ: Why did it feel like a moral and ethical obligation?

BF: Not only had he advised me, he was protecting me. There was never a dollar exchanged. So when all of a sudden the tables turn—and he goes from being my adviser and the guy who’s helping me make this film to now he needs my help to counsel him, to protect him—it wasn’t about the film at that point. It was about a friendship, and we had a true friendship. I spent three weeks with his family and his wife. I met his kids. I went to parties with him. I was in his home. He was in my home in Los Angeles. So when he needed my help, the decision was very easy to me, because I’m watching the news out of Russia and I’m seeing over the period of five days this situation get incredibly serious. Then I’m seeing [Vitaly] Mutko, then the sports ministry who is now the deputy prime minister, and Putin, both of them emphatically denying the allegations. And both of them saying it would be the individuals that are held accountable, and, to me, that individual was Grigory. He was going to be pushed under the bus. He knew it. I knew it, and the decision was clear.

“He was the equivalent of Russia’s Snowden. He has this explosive game-changing, sport-changing, world-changing evidence that he wants to bring forward, and essentially me and my film team are going to facilitate him doing that.”

MJ: This is one of the biggest sports scandals in history. What do you make of the international sports community’s response to this controversy and its lasting influence?

BF: In my mind, in the middle of July, the IOC had no choice but to ban Russia from the Rio Games. And then you see them pass the buck and go against every single Olympic ideal and value that they had ever put forward as an organization and that they sell to clean athletes around the world. What we’re seeing is an era where governments and huge organizations such as the IOC don’t have accountability. They don’t have accountability to the athletes they are supposed to be protecting and they don’t have accountability to the truth. What we’ve seen out of Russia is a continual denial, no matter what has been presented. They are still blaming Grigory as an individual who did this all on his own.

The question of whether Russia will get to compete in the next Winter Games is still there. The question about next year’s FIFA World Cup in Moscow is still there. And then you have ongoing US investigation into election meddling and hacking and the possible collusion of the Trump administration. While I don’t have those answers, this movie shows an audience the extent to which a government or country will go to win. And if you are willing to go that far, if you are willing to go that far to cheat on an international playing field, how far are you willing to go in other affairs?

BF: He’s in protective custody. He’s been there a year and month now. The Department of Justice and the FBI have not decided yet what they are doing with this case. So he’s essentially a witness, but we don’t know whether or not he would be a witness that would also be prosecuted. I am deeply hopeful that our government would continue to protect him. Because if you don’t have whistleblowers in the world like Grigory, and if the United States is no longer a safe place for people that have been involved in high-level conspiracies within their government to come and tell the truth, that’s a sad moment for America. His fate is undetermined right now. I’m being told that he’s okay. I’m not able to speak to him or talk to him or see him. But I am being told that he’s okay. I’m very optimistic that our government will continue to protect him for having the bravery to come forward with this information.