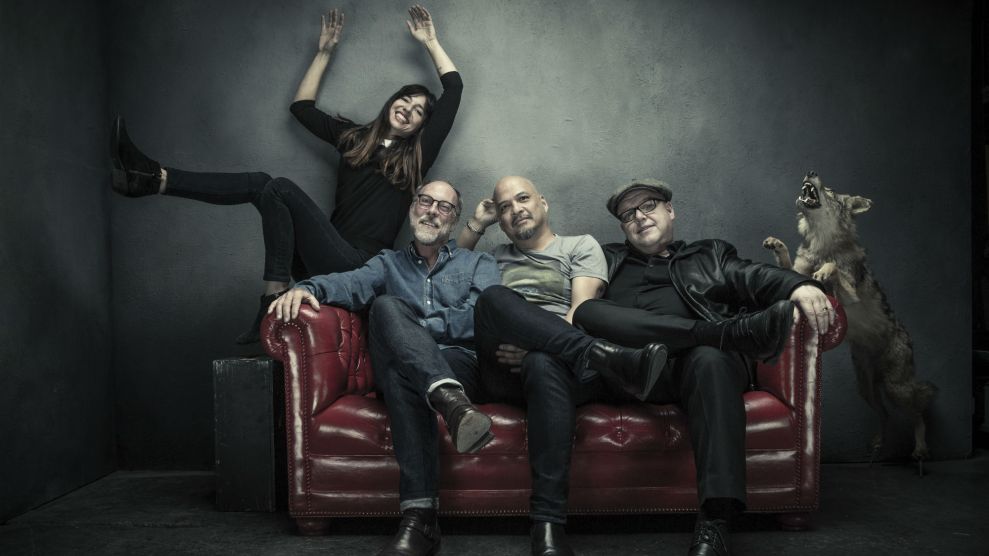 Joey Santiago, lead guitarist of the Pixies, is in LA and—predictably—stuck in traffic. But rather than rage about it, he says it puts him in an ethereal mood. “Traffic moves a little bit and a car honks,” he tells me over the phone. “It’s a nanosecond, calm down.”

The Pixies are on the fifth leg of their tour for their latest album, Head Carrier, their second full-length release since the band reunited in 2004. Head Carrier has received mixed reviews, but it’s gotten a much warmer reception than the band’s previous release Indie Cindy, which critics derailed as lifeless, anonymous, and a far cry from the sound that made them so influential. You can hear a hint of the band’s earlier, more abrasive aesthetic in Head Carrier but it’s mellowed out significantly—some of the songs hew closely to the signature Pixies sound without adding anything new.

Santiago isn’t phased by this though. “I love it,” he says of the new album. “It’s simple and deep.” And Pixies fans don’t seem to mind either—the band’s next few shows in Portland, Seattle, and Oakland are completely sold out. I talked to the guitarist about the new album, being on tour, and what it’s like to look back on his decades-long career.

Mother Jones: How have you been feeling about the album and the tour?

MJ: Did you guys have any goals in mind about what you wanted it to sound like?

JS: We wanted it to be more in your face—a departure from Indie Cindy. Not so much layering, but just more punchy. We also wanted to get out of our comfort zone, that’s why we got a new producer for it. We didn’t want to be so comfortable when we were going to be in the studio.

MJ: Any particular songs that stick out to you as your favorite, or being different?

JS: I like “All the Saints.” I think it’s a beautiful piece. It was hard to put together; there were millions of ways we were trying to do it. We went on the edge on that one, as far as our language goes.

MJ: You’ve been around for so long, do you ever feel pressure to create something new, or do something to draw younger people in?

JS: No, I think we have free rein now. I think Indie Cindy was a great album, and it was different enough, and it was unexpected. We might have gotten some flak from it, but then we went back to Head Carrier [and] backpedaled a little bit into our roots. I mean, everything will sound like the Pixies—we’re pretty lucky that we can always sound like us.

We do what we do, once we get to the studio, we are what we are. We’re pretty lucky that young people still like it. It’s kind of flippant to say, we really don’t care what people think, but that’s what we were like in the beginning. Once [the music] is out there, it’s beyond our control. It becomes alive. We don’t know what it’s going to do once it’s out there.

The thing that keeps us on our toes [on tour] is that we don’t have a set list. We call ’em out every night—that makes it fresh. We just go ahead and do as best as we can.

MJ: Is there anything that’s changed in your lives that’s affected the music you make?

JS: I can only speak for myself, but I try to challenge myself to play different things, but in the end, it always comes back to what I sound like—no BS, no noodling. It’s like I’m stuck with one paintbrush, at the moment.

MJ: It is such a huge part of the sound though.

JS: Yeah, well, we got lucky, we got lucky with our dynamic going in—it was the first band I’ve joined, and it’s the first band anyone has, Charles [Black Francis] and David [Lovering] included, other than fooling around with high school buddies. I had a silly band called the Blizzards because of all the days when school would be snowed out. Anyway, the Pixies was my first band, and it’s what I’m accustomed to. I’ve played on other projects, but nothing feels like this. It feels right.

MJ: Did you ever expect that it would turn out this way?

JS: Well, I expected the best. I dropped out of school [to join the band], and everybody in my family had gone to college. I had to make it count. We put a time limit on it—at least I did, I wasn’t going to stick around for years, I would have gone back to school at some point. But within a year we were in England.

MJ: If you could describe your career in a word, what would it be?

JS: Lucky. That’s it… I’m about to pass a Guitar Center, and you think about how many guitars are sold—how many reach the Hollywood Bowl? It’s lucky.