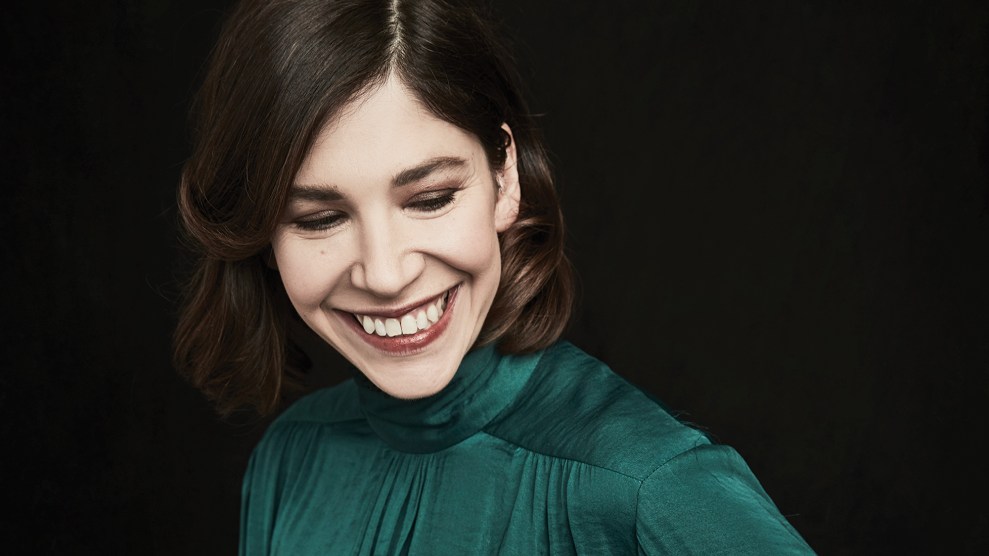 Carrie Brownstein plays lots of characters in Portlandia, the Emmy-winning comedy series she co-created in 2010 with executive producer Jonathan Krisel and Saturday Night Live alum Fred Armisen—like Lance, her stoic biker dude; and Kath, determined to put 110 percent into every joyless activity; and Toni, the repressed co-owner of a feminist bookstore. Brownstein juggles multiple roles behind the camera, too—producing, writing, and directing. The final season of Portlandia premieres January 18 on IFC. “Even though it was bittersweet when we filmed the last scene, and the whole season had kind of a sadness to it, it won’t really feel real until next spring rolls around and we would have been writing or going up to Portland to shoot,” Brownstein says. “It’s hard to really understand the totality of it until it doesn’t exist in our schedules.”

Mother Jones: I read that Toni and Candace, the bookstore owners, were among your earliest characters.

Carrie Brownstein: Before Portlandia, Fred and I made videos for our friends under the moniker ThunderAnt. Fred was in Chicago and I was in Olympia, Washington, but we both toured [with our punk bands]—there was so much in those insular communities that claimed inclusivity but felt very exclusive. So we used Toni and Candace as stand-ins, because bookstores should feel very open and warm, but these characters are stifled by rules and guidelines. Really it was an homage to those scenes we came up in.

MJ: Which characters would be your opposites?

“We don’t write in a vacuum…This season is about sorting through the toxicity.”

CB: Because our intention is to explore couplehood and relationships and people’s connection or disconnection to place, most of them come from aspects of ourselves. Even somebody like Kath—anger has always been a source of motivation and drive for me. My goal in life, one of them, is to sort through that, whereas Kath exists in that heightened state of ire and irascibility at all times. So often, it’s just sort of turning up the volume on a part of oneself.

MJ: How would you say doing Portlandia all these years has changed you?

CB: I think it helped me learn about compassion and becoming a better collaborator, friend, boss. Those seem like cliché things, but there are things more important than the work, [like] not losing faith in art as something that can be impactful and create connections. It can be very despairing to think that stuff doesn’t matter, but when I look to other shows or other books or music, I realize that’s what I’m counting on. That’s the thread that keeps me motivated and open.

MJ: What sort of stuff?

CB: Lately I’ve just been trying to read. The last two books were Exit West, which was incredible, and Jesmyn Ward’s Sing Unburied Sing. Her Body and Other Parties is a book of short stories I loved. When I’m in the middle of filming I can’t watch a bunch of things because it just feels like I’m stacking up a language. It’s too much stimulus. I usually turn to literature as a way of redirecting my brain. I’ve been writing, so I’ve been listening to classical and jazz and stuff without lyrics. But I like almost anything Young Thug does. The new St. Vincent. The SZA record I’ve been listening to over and over.

“Resistance is choreography, and you need to practice the steps.”

MJ: Hate to bring him up, but has our president altered your creative perspective?

CB: Of course. We don’t write in a vacuum. What’s tricky is the news is coming so quickly, and you don’t know in the summer what is going to happen in January. In this season, there’s a permeating sense of anxiety, examination, and reflectiveness. Instead of, okay, here’s a specific event, we tried to think about, “How does this affect a person, a couple, a town? What is the emotional underpinning of dread or fear and how does that creep into a person or a couple?” It’s about sorting through the toxicity.

MJ: How do you stay sane?

CB: [Laughs.] I’m trying to be an attendee of things. There’s something very restorative about connecting with strangers and friends in the place you live. I went to this beautiful performance the other day—just went by myself on a Sunday afternoon and walked through this house where a series of musicians were playing. Being in the world, I think that helps. We’ll need to start voting in local elections, showing up to protest, and helping our communities. Resistance is choreography, and you need to practice the steps.

MJ: What hurdles have you encountered in the male-dominated music and TV worlds?

CB: I always think of that David Foster Wallace speech where one fish asks the other, “How’s the water?” and the other fish says, “What the hell is water?” For many women, that question is so difficult because you have made so many micro-adjustments to make yourself feel safe, understood—to make yourself feel deserving. You’re making these minute adjustments all the time. I think the biggest litmus test is realizing, “OMG, I didn’t have to do that today!” It’s not just women. How many people of color occupy the space? How many queer people? For most anyone who feels marginalized, when you walk into a space and aren’t looking around to count who else is there who looks like you, it’s oxygen!

MJ: What would be one such adjustment?

CB: I should wear something so people take me seriously. A guy might be able to wear sneakers and a T-shirt, and by just embodying the male figure he can come in and be in charge. I’d love to wear a grimy T-shirt and jeans, but there’s a level of care so my authority won’t be undermined. There have been a ton of moments, whether it’s setting up equipment for music or stepping into a nontraditional role, where I feel like I have to fake it until I make it—until people understand that I’m allowed to be there.

MJ: How did Portlandia create space for the “other”?

“Unless you are actively anti-racist, you’re not changing anything.”

CB: We made very purposeful changes to make sure the writers’ room, the crew, the casting was more intersectional. You realize at a certain point that if you are not laying down the track for other people, they will not have access. Unless you are actively anti-racist, you’re not changing anything—if you are not specifically saying, “I don’t want everybody to be white in this scene.” And examining: “If I’m writing a script and only designating when it’s a person of color, then I’m still thinking of whiteness as the norm.”

MJ: Have you applied this sentiment to your non-Portlandia projects?

CB: When I did my Kenzo movie [The Realest Real], I cast a variety of talented people that don’t all look the same. There are a ton of eager, hard-working, very brilliant people out there. It’s actually shockingly easy. You just do it. It’s not rocket science.