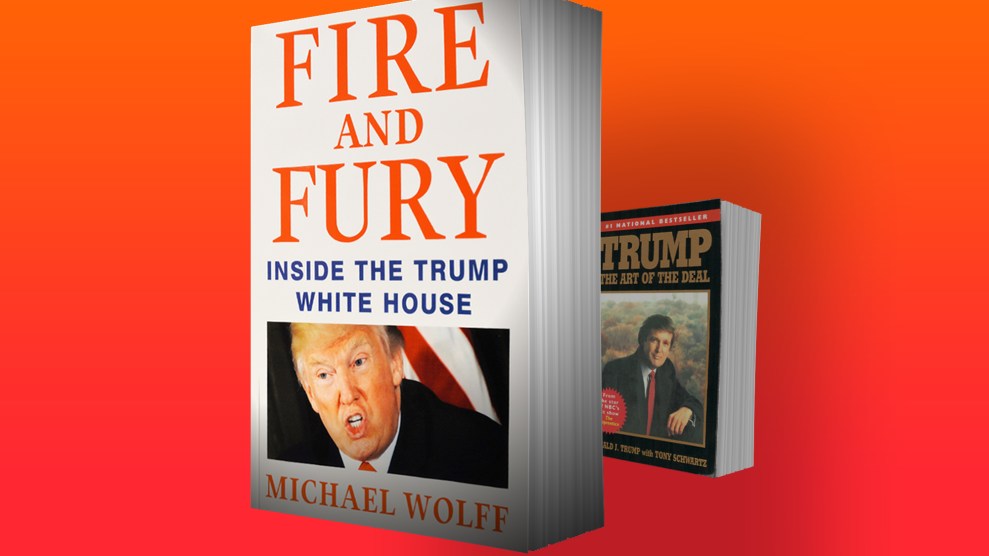 It’s only been on the shelves for two weeks, but sales of Fire and Fury: Inside the Trump White House by Michael Wolff are already on track to outpace its subject’s most famous best-seller, The Art of the Deal, which turned 30 last year. According to numbers provided exclusively to Mother Jones by Donald Trump’s co-author and the country’s leading book sales tracking company, Fire and Fury is projected to reach 1.75 million in sales, while Trump’s Art of the Deal has only sold up to 1.67 million during the decades it has been available in bookstores.

Trump and his team have angrily railed against Fire and Fury, the behind-the-scenes account of Trump’s first six months in the White House, since excerpts began appearing early January—calling it “phony“, “fake,” “garbage,” and a “really boring and untruthful book.” Trump’s lawyer issued a cease-and-desist letter to the book’s publisher, who in turn accelerated the book’s release by a few days. Among the biggest revelations in Wolff’s account is Trump’s former chief strategist Steve Bannon calling the president’s son “treasonous” for meeting with Russians in Trump Tower during the election campaign. That, and other damaging passages that rely heavily on Bannon, prompted the president to declare that his former campaign chief had “lost his mind.”

“Not only is he helping me sell books, but he’s helping me prove the point of the book.”

In response to Trump’s attacks on the book, Wolff told NBC’s Today: “Not only is he helping me sell books, but he’s helping me prove the point of the book.”

Given Trump’s tendency to deny that any rival could best him, in any endeavor (see Time magazine covers, crowd sizes, and, the popular vote), I wondered: how do the sales of Wolff’s new book compare to the legendary Trump tome, published in 1987? After all, Trump keeps mentioning his book, even when he launched his presidential campaign in 2015: “Our country needs a truly great leader, and we need a truly great leader now,” he said. “We need a leader that wrote The Art of the Deal.”

A few caveats before we dig in: book sales figures are notoriously slippery. Publishers talk about “print runs”: the number of books printed and shipped to retailers, representing a best guess about how many books will sell. There’s a lag time between getting those books to stores and when a cashier ultimately swipes its barcode or Amazon puts it in your mailbox; unsold books are returned to the publisher when booksellers spot demand finally waning. Only time can give sales trackers like NPD BookScan (formally Nielsen BookScan) a clearer picture of how many units were sold, and even then, their numbers capture only a portion of the market. (NPD BookScan says it tracks approximately 85 percent of US retail sales of physical books.)

Nevertheless, it’s already clear Fire and Fury has become a record-setter for publisher Henry Holt, an imprint of Macmillan. Patricia Eisemann, the director of publicity, told me this week that the company expects to sell all 1.4 million hardcover books currently on order. The first half of that has already been shipped, she said, and the second half “will be shipped shortly.” There were early reports of booksellers scrambling to get copies, as stocks quickly sold out. I spotted a hand-scrawled note taped to a bookshop window near the Mother Jones offices in Manhattan on the day of its release: “NO COPIES OF FIRE AND FURY. SORRY!”

“We do expect the 1.4 [million] to be sold,” Eisemann said, adding that it’s hard to predict precisely how many physical books eventually get returned to the publisher from booksellers, unsold. “It truly varies title by title.” The company says it’s the fastest-selling nonfiction book in the company’s history.

The publisher of “Fire and Fury” says it’s the fastest-selling nonfiction book in the company’s history.

Just looking at the number of actual copies shipped to stores awaiting purchase, or downloaded, Fire and Fury has already set a crackling pace: more than one million in its opening week. If Henry Holt sells its entire print run, as they project they will, that number leaps to 1.75 million, all before the book is available in paperback.

Kristen McLean, a NPD executive, told me actual point-of-sales numbers will become much clearer soon. “The next couple of weeks will be telling,” she said. “We will have to see if all of this heat translates into a sustained run on the bestseller list, or whether reader interests turn fickle as the news cycle inevitably turns to other topics.” (Wolff didn’t respond to an invitation, via his publicist, to comment for this article.)

Given Henry Holt’s official projections, the question doesn’t appear to be if Wolff’s Fire and Fury will surpass Trump’s The Art of the Deal, but when.

Let’s look at The Art of the Deal:

President Donald Trump himself calls his 1987 hit book, “the number one selling business book of all time.” He added a Trumpian clarification to that 2015 brag: “I’m pretty sure it is.” (FYI: It’s not.)

For real numbers, I went directly to Trump’s co-writer, Tony Schwartz, who has equal billing alongside Trump on the cover of the book (and reaped half its advance and half its royalties, according to the New Yorker.) “As of March 31, 2017 the book has sold a total of 1,469,280 copies,” Schwartz told me, according to the latest royalty check he was sent. He added: “I suspect it has sold another 200,000 or so in the past 8 months, but I can’t say for sure.” (Schwartz confirmed to me he is talking about all editions of the book, including digital and audio copies.)

That means, using Schwartz’s round-figure estimate, lifetime sales of The Art of the Deal could be as high as 1.67 million—less than the forecasted best-case first-year number from the publishers of Fire and Fury.

The history of The Art of the Deal reveals some more clues in the hunt for an exact sales figure. The book was touted as a booming success when it hit shelves in 1987, spending forty-eight weeks on the New York Times best-seller list, 13 of them in the top spot. But all wasn’t what it seemed: Four years after the book was published, a former Trump hotel executive, Jack O’Donnell, wrote a tell-all book (freshly unearthed by the New Republic, in September) alleging that the Trump Organization supercharged sales of the book by bulk-purchasing tens of thousands of copies itself, artificially cementing it on the best-seller list. Executives tried creative ways of getting rid of all the books, O’Donnell told the New Republic, including placing them on the pillows of Trump hotel guests, next to the mints.

The Trump Organization allegedly supercharged sales of the book by bulk-purchasing tens of thousands of copies itself.

Since then, sales have mapped along the contours of Trump’s own fame, and by the time he was running for president, sales had reached “1 million, or 1.1 or 1.2,” Schwartz told me. (Schwartz’s estimate from during that period aligns with a CBS investigation published in August 2016, which said the book sold 1.1 million copies; The New Yorker, in its in-depth Schwartz profile from July 2016, reported that “more than a million copies have been bought.”) But since then, Trump’s headline-grabbing political career has racked up sales not fully caught in earlier reporting. After Trump entered the presidential race in June 2015, a new trade paperback edition of the book hit the shelves, and, by the end of that year, sales figures for The Art of the Deal had grown by more than 2200 percent from the previous year, according to updated figures provided exclusively to Mother Jones by NPD BookScan. (The company’s numbers don’t include digital downloads, and they only track book sales back to 2001.). Annual sales then grew 176 percent in 2016 compared to the previous year.

NPD BookScan’s tracking numbers show The Art of the Deal sold more than 109,000 copies in 2017. That’s half the number Schwartz believes may have been sold over the last eight months since his last royalty check, a difference that could possibly be explained by the limits of NPD’s market reach, and the firm not considering digital sales. (Random House did not respond to requests for sales figures, and Hachette Book Group, which put out a 1989 paperback edition of the book, told me that only Random House published the book.)

In any case, Wolff’s book dishing on the back-stabbing machinations of the Trump presidency appears to be on track, within an astonishingly short amount of time, to eclipse the president’s own masterwork.