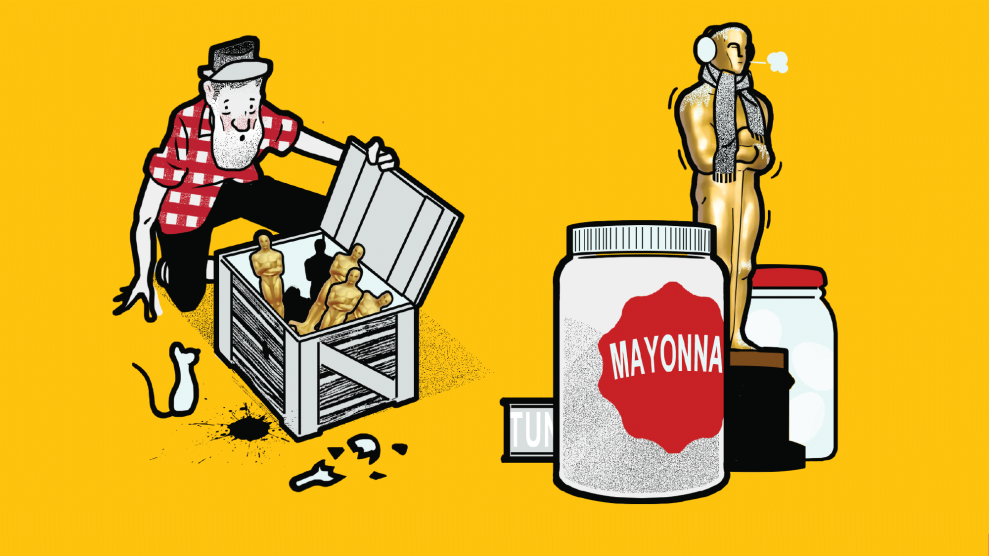 At an Oscars after-party on Sunday night, a man who allegedly snatched Frances McDormand’s Oscar for best actress was foiled by an event photographer before he could get away. It certainly wouldn’t be the first such attempt. Of the 3,097 Oscar statuettes the Academy of Motion Picture Arts and Sciences has handed out prior to Sunday, 79 of them have starred in various crimes, mysteries, and happy endings worthy of the big screen. Let’s roll camera on a brief history…

1938: The public is in a tizzy amid rumors that a mystery man came onstage—no TV back then—and accepted Alice Brady’s best supporting actress award for In Old Chicago only to disappear. (Brady was unable to attend the ceremony.)

1939: The academy officially adopts the “Oscar” nickname. Nobody is sure where it came from, but then-academy librarian Margaret Herrick, upon seeing the statues for the first time, supposedly said the figure looked like her uncle Oscar.

1950: Sid Grauman, a 1949 winner, dies, and his award goes up for auction. The academy dispatches a representative to reclaim it. New rules are put into place: Subsequent Oscar winners must offer the academy the first chance to buy back a statue—for $1—and each figurine is given a traceable serial number.

1954: A housekeeper allegedly makes off with Margaret O’Brien’s outstanding child actress figurine. Forty years later, two men buy it at a California flea market for $500 and “present” it back to O’Brien. The academy rewards them with tickets to the next ceremony.

1970s: Hattie McDaniel’s best supporting actress award for Gone With the Wind—the first Oscar given to a black woman—goes missing from a display case at Howard University. Oscars won by cinematographer Karl Freund and director Lewis Milestone also are stolen in (apparently) separate incidents. Freund’s statuette is recovered 15 years later, after his son-in-law sees it advertised in the Los Angeles Times for $20,000. Milestone’s two awards are recovered in 1991 from the home of actor Christopher Riordan, who claims he got them from a friend. But McDaniel’s Oscar is never found.

1978: Oscar winner Gig Young fatally shoots his wife and himself. After his daughter sues for ownership of her dad’s figurine, Young’s agent is forced to bequeath it to her.

1986: After Gone With the Wind art director Lyle Wheeler fails to pay his bill, a storage facility auctions off his belongings—including a box containing his five Oscars. The buyers, a California couple, refuse to return them, but they sell one statuette (for $21,250) to someone who does.

1992: Harold Russell, a disabled actor who won for his portrayal of a disabled veteran in 1946’s The Best Years of Our Lives, auctions off his figurine to cover medical expenses for his wife, Betty, he initially claims. (The academy’s restrictions only cover post-1950 awards.) “I love the Oscar, but I love my wife more,” he tells the New York Times. He later admits that he sold it to cushion the couple’s retirement.

1993: Gold rush! Vivien Leigh’s best actress award for Gone With the Wind (1939) fetches more than $500,000 at auction. Three years hence, Clark Gable’s best actor statuette (It Happened One Night, 1934) goes for $600,000-plus. Three years after that, Michael Jackson shells out $1.5 million for a Gone With the Wind best picture Oscar—which is reported missing in 2016.

2000: In LA’s Koreatown, 61-year-old scavenger Willie Fulgear stumbles across 10 packing crates containing 52 Oscar statuettes stolen in transit before they could be handed out. The academy rewards him with $50,000 and tickets to a ceremony. One of the three culprits is later revealed to be a relative of Fulgear.

2002: Whoopi Goldberg sends her best supporting actress Oscar (Ghost, 1990) back to the academy for replating. It goes missing and is found later in a trash can at the Los Angeles airport.

2003: During a drug raid near Miami, FBI agents recover one of three statuettes that were missing from the big Koreatown cache.

2016: Ph.D. student Olivia Rutigliano, who tracks missing Oscars (read our story about her here)—reveals that the onstage theft of Alice Brady’s Oscar back in 1938 was, in fact, fake news. The mystery man who accepted the statue was Brady’s director, Henry King.

2017: Amid the chaos of the Harvey Weinstein scandal, two of the Weinstein Company’s Oscar statues go missing. Elsewhere, actor Richard Dreyfuss reveals that he keeps his 1978 Oscar for The Goodbye Girl in the fridge. “I don’t like to brag,” he jokes at another awards gala, “but I like everyone to know about it.”

2018: McDormand gets her Oscar back and the alleged culprit is arrested. McDormand and her statue “celebrated the reunion with a double cheeseburger from In-N-Out Burger,” her publicist told the Associated Press. Twelve Oscars remain unaccounted for. Two of them, fittingly, are from Gone With the Wind.