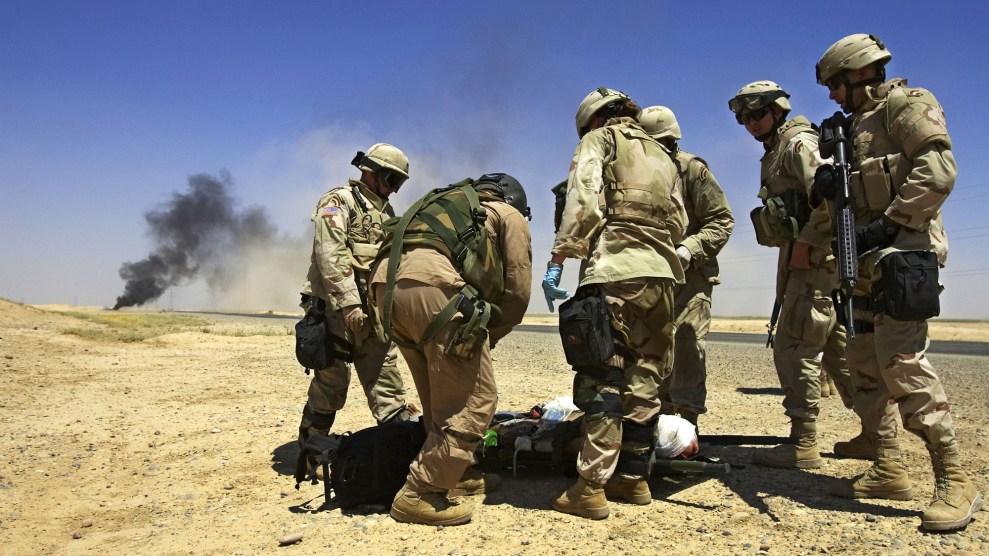 The author page reads simply, “Nico Walker lives in Kentucky. Cherry is his first novel.” Walker, 33, wanted it that way. What the bio doesn’t say is that his Kentucky abode is a federal prison. Or that Cherry—a harrowing, exceptional book that was pecked out on a jailhouse typewriter and hits bookstores on August 14—loosely follows his own experiences.

Both stories—the fictional and the real—are steeped in American carnage: of youth maimed by war, Rust Belt despair, and opioid-induced oblivion. As the book opens, Cherry’s nameless 18-year-old protagonist meets love interest Emily, whom he’ll spend the rest of the story alternately raging at and pining for. He’s not much older when he ships off to an unspecified forward operating base in Iraq, where, “unless you happen to have been there, you’ve never heard of where we were, so it doesn’t matter.”

During his yearlong Army deployment, our flawed hero bears witness to near-daily horrors, some banal, some stomach-turning. He’s a medic, but there’s little he can actually do for anyone. He wades through sewage canals to scrape bits of fellow soldiers out of bombed-out Humvees. His brothers in arms kill mice for fun and get high on keyboard cleaner. They do not win many hearts and minds. Back home, PTSD leaves him unable to function in polite society. He develops a heroin addiction that eventually drives him to rob banks.

Walker tells the story in a biting staccato, by turns shrewd, heartfelt, and repellent. And while his young narrator is less reflective and vastly more self-absorbed than the world-weary author who created him, their tales are well-aligned.

Before pleading guilty in a deal that gave him 11 years in federal prison, Nicholas Walker, a former Army medic, participated in more than 200 combat missions in an exceptionally deadly part of Iraq. Upon returning to the States, plagued by insomnia and flashbacks, he started drinking in an attempt to help him sleep. Increasingly dissociated and self-pitying, he took to opioids, first abusing prescription pills and eventually shooting up.

When it comes to his own story, Walker is humble and wary of the tendency to romanticize it, even though he knows it sells books and attracts clicks. But the author is proud of the outcome. “It takes discipline, or at least an obsessive-compulsive disorder, to do the work of writing a novel,” he says. He spent more than three years writing and revising and exchanging hard-copy drafts with editors who, at times, seemed uncertain the project would amount to anything.

“Were the outcomes of all the wars decided by push-ups and idle talk, America might never lose.”

Eventually, though, it all came together. Cherry‘s descriptions of Army life are as acerbic and unsparing—and often darkly hilarious—as the boot-camp scenes from Full Metal Jacket. “I did a lot of push-ups,” the narrator says. “I was good at them. Most of us could do push-ups. And were the outcomes of all the wars decided by push-ups and idle talk, America might never lose.”

In an early scene, the narrator takes a bus cross-country to visit a woman he’s been dating since high school, now a freshman at Rutgers: “We had come to a frat house, to a basement done out in plywood, some kind of beer-pong sex dungeon, everything as dismal as murder.” Moments later, he learns she’s been cheating on him. In Army slang, Walker’s brash, self-absorbed alter ego is a cherry—“someone who hasn’t seen anything,” he explains, “with the implied yet.”

Mother Jones: In the introduction you write, “This book is a work of fiction. These things didn’t ever happen. These people didn’t ever exist.” I took that with a grain of salt. How autobiographical is Cherry?

Nico Walker: I lose track. There’s a lot that’s made up from whole cloth. You’ll have composites—maybe I meet eight people and they all get mashed together. You use that character to stand in for a type of person. Working on Cherry, changing things around, confabulating things, making composite characters, making things up—I did so much of all this that nowadays I’d have to try hard to sort out what was real and what wasn’t. It’s made my memory unreliable.

MJ: Your protagonist is a sensitive kid who worries that others will size him up and conclude that he’s weak. Some guys join the Army because they think it’ll make a man out of them. Was it like that for you?

NW: Yeah, I guess you expect some sort of magical transformation. If you live through it, it means you’ll be able to handle everything else. That’s certainly a fallacy. Probably because whether you make it through has got nothing to do with whether you’re a man; it’s pretty much based on blind luck. But yeah, for sure. I don’t know if I would say I wanted to be some sort of tough guy, but [I figured] it would definitely be challenging.

Deploying with an infantry company to where we were at the time was fucked up in retrospect. You had maybe 140 people, mostly young, and it wasn’t a question of whether anyone would die, but rather how many and who they would be. Of course, you didn’t think of it like that then.

It’s a serious thing to get involved in stuff like that. When you’re there you’d rather be anywhere. It isn’t till you get back that you want to be there. But something I tried to get across in the book is that war doesn’t have a monopoly on death. Among the first things the narrator finds when he gets back to the States are cancer and traffic fatalities. So it’s everywhere, this death.

MJ: Let’s talk about your own bank robberies. You had an expensive habit to fund. But what, in the larger sense, led you to do that?

NW: I was being very inconsiderate, obviously. I wasn’t thinking about all the potential risks, all the things that could happen. But I was kind of out of my head. Really I was thinking, “I can’t believe that there are people who are actually mad about this sort of thing.” Take all law and mores out of context—take all that away, [and] what I was doing for the government was probably a little worse than what I was doing that got me in prison.

In Iraq, you’re kicking in doors, telling people to get down on the floor, zip-tying them, searching their house. That was probably much more traumatic to the people involved than it was to the people in my [criminal] case. Robbing banks, I didn’t put my hands on anyone. Didn’t even swear at them. I flashed a gun for all of one, maybe two seconds. That was it.

In the Army we killed people. So it was some serious shit. Way more serious than holding up a bank. I know that the context changes things. One is officially sanctioned violence, the other is unilateral junkie fuckery. But one pales in comparison to the other. [Robbing banks] just seemed like—I hate to say it—it seemed like child’s play. It seemed easy, I guess.

MJ: Some readers may be put off by some of your narrator’s language, words like “cunt” and “haji,” for instance. Did you worry about alienating, say, female readers?

NW: Oh yeah. I definitely did. But I didn’t want to sugarcoat things. I wanted to say, “This is how people talk.” I never endorse anything that happens in the novel, you know? I don’t think people should use intravenous heroin either.

About the word “cunt.” I did run it by a friend of mine. She’s a progressive and a feminist. I was kind of nervous. But she said I ought to keep it how it was, and that reassured me. I wouldn’t write a book that promoted misogyny or anything like that. I hope I got it across that the narrator holds some misguided views about women and their relationship to him.

As far as “haji,” I really dislike that word. It was difficult for me—I have friends who are Muslim, who are Arab—and the decision that I made to use those words was: That was what we said over there. I won’t say everyone, but almost everyone said that word, and I’m trying to be true to that.

MJ: What do you think you’ll do when you get out of prison?

NW: I can’t say 100 percent. I’m probably going to try to write more books. It’s that or dig ditches or be a garbage man or something. It’s pretty much my [only] option. And then: not break the law—just obey all laws.