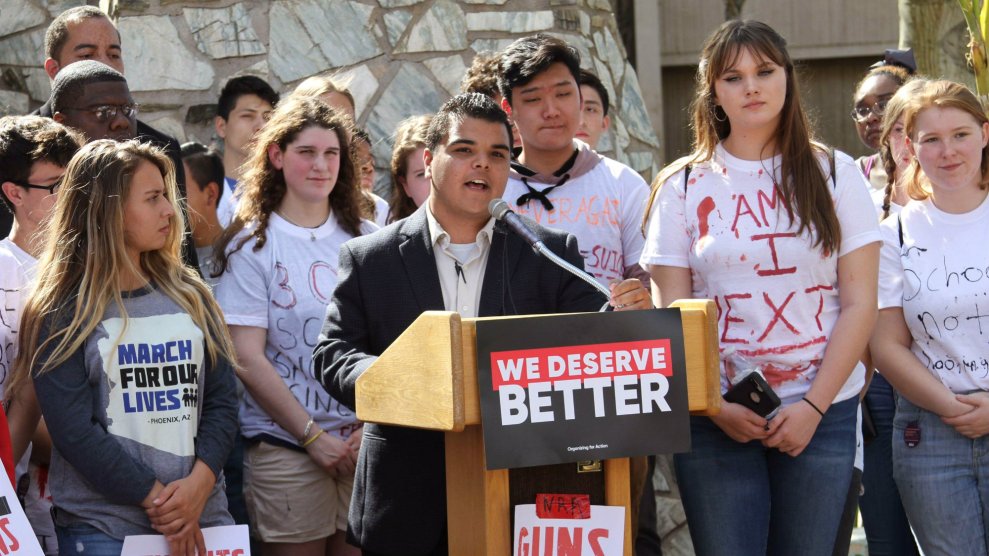 Students from the Arizona March for our Lives group at a rally in March. Courtesy of Jordan Harb

High schoolers across the country are leading voter registration efforts—even though some are too young to head to the polls themselves. Some of these new organizers, like 17-year-old Jordan Harb of Arizona, were energized to call for tighter gun laws after the Parkland school shooting in February, reports the Guardian. Harb and other students at March for Our Lives Arizona have led walkouts and, four months ago, staged a die-in at their state Capitol.

The teens are supported in part by outside organizations such as Everytown for Gun Safety. Before this year, Guardian reporter Lois Beckett says, it would have been unlikely that organizers would fund high-schoolers to register voters, but the activism of the Parkland school shooting survivors has inspired teens to help.

So far, Harb tells me, his Arizona group has registration events planned at 25 high schools in Phoenix, Tucson, and Flagstaff. Although registering voters shouldn’t be controversial, Harb says the group has been getting pushback from some schools. But that’s not stopping the teens.

“We are finding ways around it,” Harb says, “by either registering students under the table (without the administration knowing), or setting up a drive across the street.”

This week’s Recharge highlights high schoolers, a patrol officer’s impromptu act of kindness, and how one community fought for money to rebuild. Recharge is a weekly newsletter full of stories that will energize your inner hellraiser. Sign up at the bottom of the story.