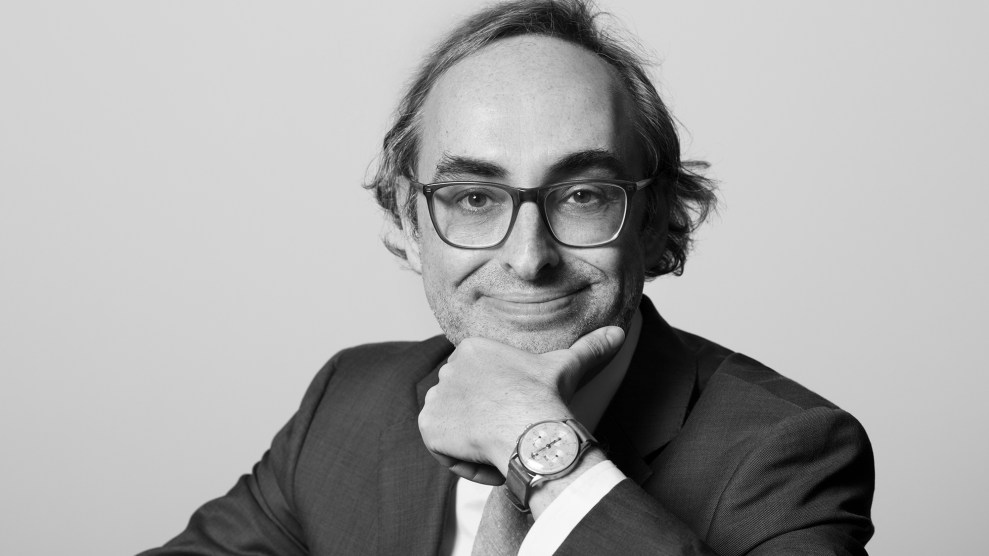 Boy meets girl. Boy had messed-up boyhood and is weird and sort of delusional. Boy became hedge fund manager, very rich. Boy (white, 40s, Princeton) marries girl (child of Indian immigrants, way younger, Yale Law). Girl gives up career. Boy and girl have severely autistic son. Boy cannot deal. Boy also has made an unscrupulous investment. His hedge fund is in trouble, his marriage on the rocks. So boy bails on girl, investors—everyone—and embarks on a Greyhound bus journey to find himself and perhaps rekindle things with his old college flame. Boy’s name is Barry Cohen, and his pathetic, self-obsessed journey is at the core of Lake Success, Gary Shteyngart’s quirky and often darkly hilarious new novel, out this week.

Shteyngart, a Russian Jew who came to America as a seven-year-old—and who, for some reason, was nicknamed “red gerbil” by his Hebrew-school mates—is familiar enough with the immigrant experience. Penthouse apartments? Private equity? Not so much. Sure, Shteyngart has written a string of bestsellers, most recently his memoir, Little Failure. He even qualifies as an “accredited investor.” But he didn’t attend the Ivies (more of an Oberlin guy) and has barely even touched a lacrosse stick. (“I am terrible at every sport I tried,” he admits.) To write what he knew, he had to spend some quality time around Wall Street bros—and he embarked on his own “Hound” excursion, something every well-off person should try from time to time, he says, if you really want to understand America.

Mother Jones: First, a question unrelated to Lake Success: Every year, certain aspects of Super Sad True Love Story seem more and more prophetic. Does that freak you out at all?

Gary Steyngart: Yeah. Super Sad. I thought we’d have a window of maybe 15 to 20 years before most of that book came true. But it took about six years after publication. I am freaked out.

“I’ve heard people describe their net worth in terms that were almost poetic.”

MJ: What’s your net worth? I know that’s a rude question. But under normal circumstances, your protagonist would probably appreciate any opportunity to discuss his net worth.

GS: My net worth is very healthy in all worlds except tech and finance. In those worlds, it is a bit anemic. In my three years of researching hedge funds, I’ve heard people describe their net worth in terms that were almost poetic. The Hampton prices, the alternative asset classes, everything meant so much to some of the folks I’ve met. It’s almost how we talked about love when we were teenagers. We were consumed, and so are they.

MJ: Seema, Barry’s young spouse, has traded in her career to be a rich dude’s wife, and surprise, she’s unfulfilled. Like you, she’s from a family of immigrants. What was your inspiration for her?

GS: It almost became a cliché to meet hedge funders who were married to women of great intellect and promise. What happened to them? When did the ambition leave them? How could they allow their husband’s career to become the only one in the family? What would that mean for their daughters and their view of themselves? These questions continued to haunt me. In the old days, you married your secretary. Now you married an MD-MBA-JD VP at Goldman Sachs and took her “off the market.”

MJ: What did you know of hedge funds, or Wall Street bros, prior to writing this book?

GS: Not a whole lot. Although I did want to be a banker when I was a Republican youth growing up in Queens. I saw the movie Wall Street a million times, each time wishing Bud Fox wouldn’t get caught. I was a pretty messed-up kid.

MJ: You and Ben Stiller did a goofy book trailer lampooning hedge funders as a bunch of privileged white lacrosse bros who don’t actually know what the fuck they’re doing. Satire notwithstanding, did you find that to be the case?

GS: Not always, but often. Many of the folks I became friends with were “quants,” usually PhDs in math or physics who were very strong intellectually. But there were a lot of “Brads” on the way, who kept blowing up over their own version of “llama futures.”

MJ: The video purports to be a recruitment video for a new hedge fund. That would be a great gimmick. Are you really doing it?

MJ: How did you go about researching Barry and Seema’s world? Did you feel like a fish out of water?

GS: I spent many years hanging out with these guys. Oddly enough, I kind of got their world from the start. I had gone to Stuyvesant High School, a kind of mega-nerd immigrant school in Manhattan. The same dog-eat-dog relentlessness lived on among my new friends. And several of them had actually gone to Stuy.

MJ: One subtheme of your novel involves the frivolities of wealth. You must be doing okay these days. How has having money affected your own life, for better or worse?

GS: I’m okay, but I still have to watch what I spend. The difficulty for many of the people I met, and, more importantly, for their children, is that there is enough money to last a lifetime. Sometimes several lifetimes. This creates not just inequality, but an incredible disconnect with the rest of the country. If you look at it a certain way, a huge chunk of Manhattan is a kind of gated community filled with the same kind of people. This is tragic for our society.

MJ: Another theme is parenting challenges. Shiva, Seema’s and Barry’s son, is severely autistic. Seema takes charge and Barry shrinks from his responsibily. He just can’t deal. I imagine this would put a strain on any marriage. Have you spent any time around autistic kids?

“My watch collection is anti-bling. Unless you know what you’re looking for, they’re just normal watches.”

GS: I know many kids on the spectrum and feel a kind of kinship with them. A person like Barry, who may himself be on the spectrum, desires perfection in all aspects of his life. Having a child with a disability is just not something he bargained for and he flees his family. I did not want to exactly redeem this schmuck-y move by the end of the novel, but neither did I want him to remain exactly who he was at the start of the book.

MJ: Barry’s obsession, really his security blanket, is his collection of rare watches. I understand you also have a thing for watches. How many do you own? Tell me about your favorite.

GS: I own close to a dozen. I think I like the watch that inspires Barry throughout the book, a 1940s Universal Geneve Tri-Compax. It’s this little golden nugget of a watch that makes me smile every time I see it.

MJ: Some people would say buying an expensive watch is all about putting wealth on display. It’s not about telling the time anymore, because everyone has a phone. What’s the allure for you?

GS: The real watch nerds buy watches that nobody except other watch nerds could recognize. My watch collection is anti-bling. Unless you know what you’re looking for, they’re just normal watches.

MJ: Barry takes a Greyhound across the country and kind of tries to pretend he’s a regular guy. The last time I rode a Greyhound, I was in my mid-20s and it was the last bus on the night before Thanksgiving and I was desperate to get from Pittsburgh to New Jersey, and all these women shoved past me and my luggage when the gate opened so I barely got a seat. It was kind of a nightmare. Now, unlike many Americans, I have other options. What did you learn from your trip?

GS: Everyone has to ride the Hound across the country. Especially journalists. It is the real story of the land, and the land is suffering. The lives we’ve created for ourselves in Manhattan and West LA and Palo Alto are certainly real, but they don’t deserve the bulk of the story.