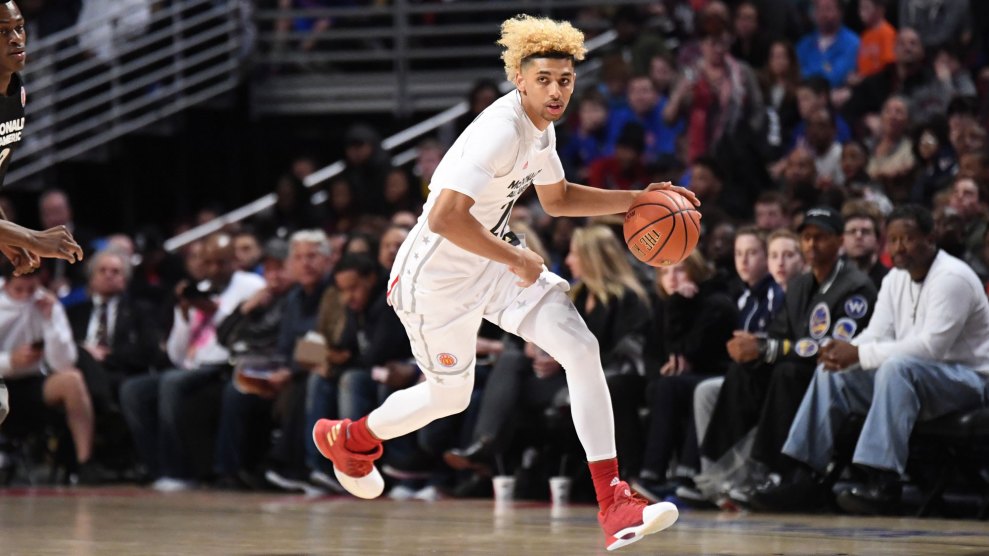 Last year, federal prosecutors exposed a “dark underbelly of college basketball” and charged nearly a dozen people in a sweeping scheme, wherein college coaches allegedly took bribes and sportswear industry representatives conspired with intermediaries in attempts to recruit high-school athletes that ran afoul of the law. The investigation, which ensnared dozens of major college athletic programs and rattled the National Collegiate Athletics Association to its core, has culminated in a criminal trial that kicks off this week.

At center stage was Brian Bowen Jr., a six-foot-seven small forward who at the last minute signed on to play with the University of Louisville under the tutelage of Hall of Fame head coach Rick Pitino. Federal prosecutors charged that Adidas executive James Gatto conspired with consultant Merl Code, intermediary Christian Dawkins, and others in a scheme to give Bowen’s family $100,000 to ensure he would attend Louisville and later sign with Adidas if he went to the NBA.

Louisville’s athletic program began to collapse after the indictment: Pitino, whose 16-year tenure was already pockmarked by two scandals—including one in which a basketball program staffer repeatedly hired strippers and prostitutes for prospective recruits and players—was fired. (In the current scandal, prosecutors allege Pitino knew of the bribery scheme; he denies wrongdoing and has not been charged with any crime.) Tom Jurich, the university’s athletic director, who ushered in a multimillion-dollar expansion of Louisville’s sports facilities, was also axed. (Bowen, who ultimately skipped college to go and play professionally in Australia, says he had no knowledge of any payments to his kin.)

Michael Sokolove, a sports enthusiast and contributing writer for the New York Times Magazine, details the entire sordid tale in his new book, The Last Temptation of Rick Pitino, which he cranked out in just seven months. “The corrupting influences in college sports are not exterior to the system,” he writes. “The rot comes from the structure of college sport itself.” I reached out to Sokolove to discuss the ethically fraught realm of university athletics, the NCAA’s toothlessness, and who gets hurt the most by a college sports scandal.

Michael Sokolove: The recruitment of Brian Bowen is the best-told story in the [court documents]. I was attracted to that, but I also thought there was more to learn and more to think about. Louisville is fascinating. It was the school that succeeded in elevating itself through athletics. From almost nowhere, they became an all-sports powerhouse—they were called the front porch of the university. They were really proud of it. And then it just blew up. That also was a story I wanted to tell because every president of every university that plays sports knows that what happened here could pretty easily happen to them. These big sports programs are all sort of powder kegs: Michigan State, Maryland, Baylor—it happens. Every administrator knows they don’t have an ability to control these programs.

MJ: Why else was Louisville unique?

MS: Because it had Pitino, a Hall of Fame coach, and also because it rose so high so fast. Through a clever and visionary athletic director and through Pitino, it was elevated into the Atlantic Coast Conference with all these superior academic institutions like Virginia and Duke.

MJ: What does this case tell us about the ability to stop agents and shoe companies from making backroom deals with players?

MS: It shows how feeble the NCAA is in its ability—and its effort—to police its rules. It wasn’t very difficult for the federal government. The FBI sent a cooperating witness out, a guy named Marty Blazer, who was in trouble for some financial crimes. They sent him out there to mix in the world of recruiting, and he used his own name. The federal documents point out that any of these assistant coaches, anybody who was dealing with him, all they had to do was Google him to know he wasn’t a person you should do probably do business with. That’s what the FBI did!

“There are billions of dollars coursing through college sports, not nearly enough of it going to the athletes.”

The NCAA’s rules are unenforceable, and to the extent they try to enforce them, they don’t do it well. There are billions of dollars coursing through college sports, not nearly enough of it going to the athletes. The cynicism that breeds is corrosive. According to the government, the money promised to Brian Bowen Jr.—”Tugs” as he’s known—was $100,000 promised to his father. Of that, $19,500 was delivered, which is one-quarter of 1 percent of Pitino’s annual salary. So it’s no wonder college athletes and their families are like, “What? This is what I’m in trouble for?” [Laughs.] This is the inequality out there.

MJ: What does this scandal say about the dynamics of modern college basketball?

MS: It exposes the complete unfairness of the system. It exposes the temptations of the family to take money and of all these other characters offering money, whether they are from the shoe companies or universities or people who make money off the buying and selling of young players. It also shows that the NCAA has to figure out some other way into this. The FBI and Justice Department, they maybe did a service by showing some of this stuff, but they are really naive. The charging documents talk about all of this causing damage to the notion of amateurism and the purity of the NCAA, but anyone who reads that just has to laugh.

MS: They talk about that these crimes involve the commercialization and exploitation of college athletes—as if the NCAA itself is not itself commercial and exploitative.

MJ: Has the NCAA made any effort to change its ways in response to this case?

MS: Really minimal. Their main response is to close their eyes, put their fingers in their ears, and wait for the case to be over and hope it all goes away. They convened a blue-ribbon panel chaired by Condoleezza Rice. They made some sensible recommendations, but they are really around the margins. They want the NCAA to maintain its amateur model. That’s a nice thing to say, but it doesn’t work and doesn’t make any sense. The focus so often is on the little bits of money that sometimes come to players in what it seems as illicit ways. But the panel never talks about the other side—the immense amounts of money generated by TV contracts and giving by donors and shoe contracts, and the fact that for athletic departments, it’s play money for them. They don’t give it back to academics. They largely pay themselves.

MJ: How has the federal probe affected Bowen’s relationship with his father, who is accused of taking the money?

“Pitino made a ton of money. He’s suing right now to get the $35 million left on his contract.”

MS: I’m told by Brian and others that somehow they just don’t talk about it, which is hard to imagine. He’s still a 19-year-old kid. His father was the person who groomed him through all of this and got him right to the promised land of big-time college basketball and screwed it all up. I know his father feels terrible about it. I also think his father is the equivalent of somebody standing on the wrong street corner when the cops come around. It could’ve been 100 parents of high school recruits. It is a family drama. It’s sort of a sad one because Brian Bowen was a very good high school player. He was probably going to be a good college player. But he was 50-50 to get into the NBA and have a significant career. He’s six-seven, a small forward, shoots the ball pretty well. But there’s a lot of guys like him. So he needed to get better. The best way is still to play college basketball for a good coach like Pitino, and he lost that chance. He lost the chance to play college basketball at all. It’s a harder road to come in from Australia or Europe or anywhere else.

MJ: Right. And Rick Pitino, who got fired over all the various scandals, is still asked whether he would coach again. But Bowen hasn’t even been able to play in the NCAA.

MS: It tells you how deeply unfair it is. Pitino made a ton of money. He’s suing right now to get the $35 million left on his contract, which is obscene. Then you’ve got Brian Bowen, who is struggling to make a career for himself 7,000 miles from the closest NBA franchise and is perceived to have taken money. I don’t believe he ever personally saw any of it. He may not have known about it. The kid is just screwed. Pitino feels very aggrieved, but he’s lived a pretty good life in college basketball. He survived two other scandals. For him to imagine he can survive a third one is entitlement.

MJ: In your book, Pitino comes off as defiant. He insists he hasn’t done anything wrong.

MS: I think there’s a lot of cynicism among coaches. Most of them know, and fear, that they could be the subject of an NCAA investigation. I don’t think players flat-out being paid to attend a school is the norm. I think it happens. The shock here for college coaches is not the revelations in this FBI investigation. I think the shock is that it’s the FBI, not the NCAA. That sent a chill through the whole industry. I’m sure it’s made people involved in wrongdoing more careful. It’s one thing to have an NCAA violation. It’s another thing to hire a criminal lawyer and sit in a courtroom.