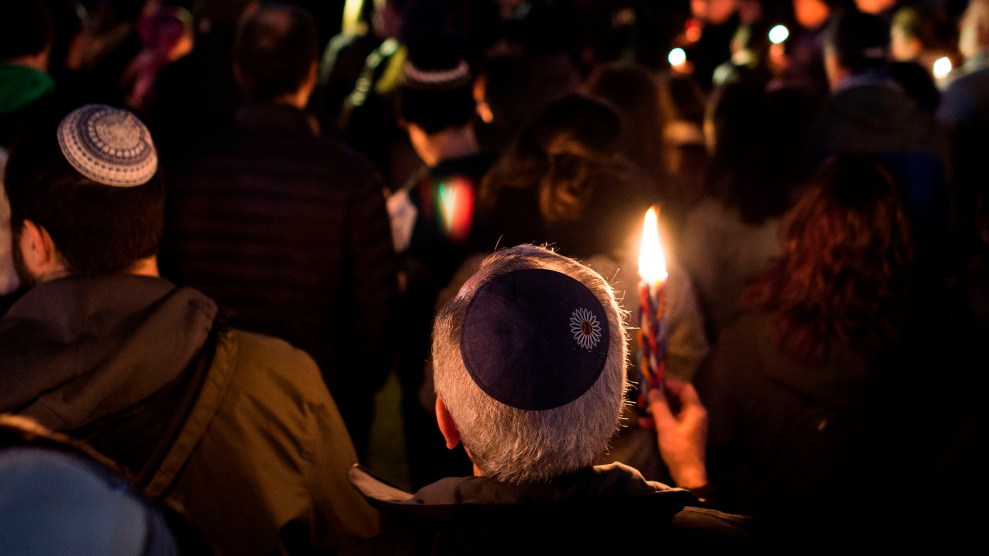 Members and supporters of the Jewish community come together for a candlelight vigil in Washington, DC.Andrew Caballero-Reynolds/AFP/Getty

After he heard the sirens, Tim Hindes thought about what he could do to help his city after the mass shooting that killed 11 people at Pittsburgh’s Tree of Life synagogue on Saturday.

He decided to create a “Stronger Than Hate” banner, replacing one of three shapes on the old US Steel logo—now popularized by the Pittsburgh Steelers—with a Star of David. He shared the image on Facebook, commenting: “I see every posting of this image as a WIN for love and a strike against hate.”

Soon, the image spread across the internet: Stars like Michael Keaton and Joe Manganiello shared the message, and it also showed up on banners during Sunday’s Steelers vs. Cleveland Browns football game.

“In all honesty, it’s not that complex of a symbol,” Hindes told the Pittsburgh Post-Gazette, “but it’s that simplicity that sort of resonated.”

The banner was just one part of an outpouring of love for the community: The Jewish Federation of Greater Pittsburgh set up a fund to help the victims and families, and United Way promised to match donations up to $100,000. Two American Muslim groups, in a separate drive, raised more than $195,000 for the Jewish victims and families.

“Putting our religious differences or even your political differences aside, the core of all of us is that we have a shared humanity,” Tarek El-Messidi, an activist who created the Muslim fundraising campaign, told the New York Times.

Bigots have targeted both faiths, he added. “The shared discrimination has brought both communities closer.”