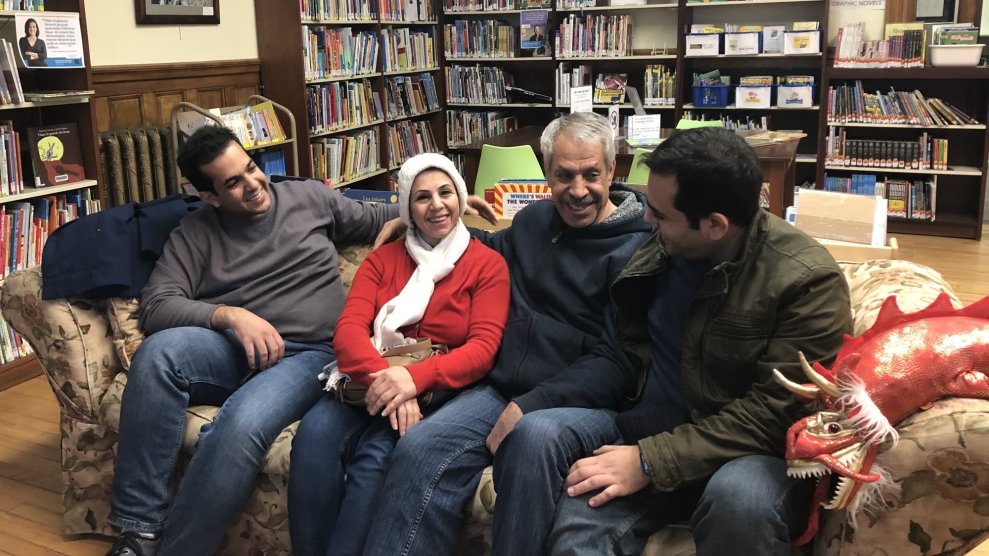 An Iranian family at the Haskell library on the US-Canada border. Courtesy of Yeganeh Torbati/Reuters

For many immigrants affected by the Trump administration’s travel ban, the Haskell Free Library and Opera House, a library straddling the US-Canada border, has become an unlikely haven. Families can meet there without risking being detained or prevented from returning to the US.

“This is a neutral area,” says Sina Dadsetan, an Iranian living in Canada who traveled to the library on the Quebec-Vermont border to meet his sister, who lives in the United States.

The library has separate parking lots in each nation, but just one entrance.

“You don’t need your passport. You park on your side, I’ll park on my side, but we’re all going to walk in the same door,” former library board member Susan Granfors told Reuters.

For Iranian student Shirin Estahbanati, the six-hour drive north from New York City was the first opportunity she had to see her parents in almost three years.

“The time I was just hugging my parents,” Estahbanati told Reuters, “I was thinking, I wish I could stop all clocks all over the world.”

We want to hear from you! Let us know your favorite Recharge-style story and why—whether it was about someone helping others, justice prevailing, or an action that inspired you. Even better: Tell us about something you did as a result of these stories. We’re planning our end-of-year column and would love to feature your ideas. Email me at recharge@motherjones.com or fill out the form below.