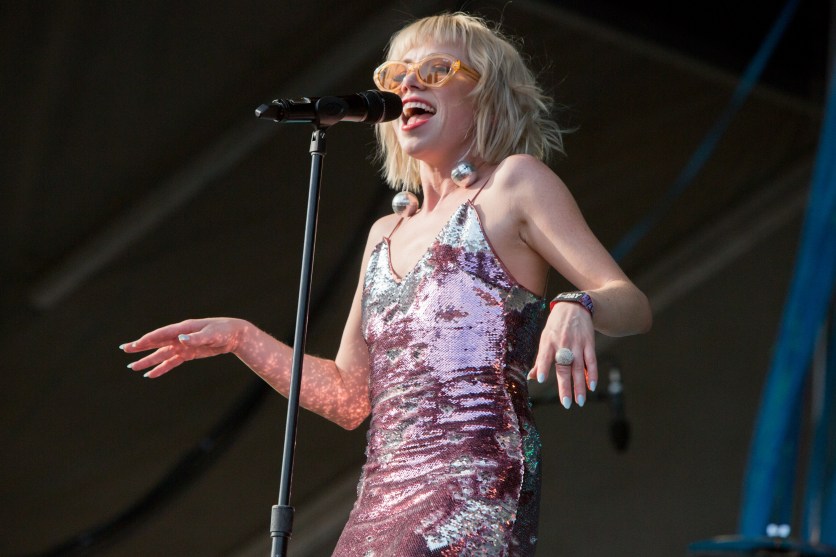 Why we’re into it: Dedicated takes Jepsen’s signature libidinal energy and transforms it into a mature collection of disco pop.

After her near-perfect 2015 cult hit E•MO•TION, Jepsen faced the classic challenge of having whatever comes next scrutinized and found wanting in comparison. The LP demonstrated her genius for turning infatuation and the crushing-on-someone feeling into music that was just over the top enough while still staying accessible. Then came E•MO•TION: Side B in 2016 that only further propelled her into the status of pop perfection—Side B was received just as well, if not better, than E•MO•TION. But it also raised the stakes for her.

Returning to the signature lovelorn sentiment Jepsen has mastered, Dedicated does it again. It’s a more mature point of view, however, and a more sophisticated musical expression. Clearly, the queen of sax holds a special place here at Mother Jones, and while there’s no bad song off the album, some shine a little brighter than others. Here’s a completely unbiased, totally objective ranked list  to help you figure out if this is an afternoon to be spent listening, or adding just a few new additions to your playlist:

As we’ve said before about NTIFY, it’s a classic Carly song, “hits all her usual sweet spots.” Which is to say it begins subtly but evolves into a message that needs to be shouted from the rooftops. This isn’t a bad song by any means, but in the broader context of this album, it just comes off as being unnecessarily aggressive and, well, immature.

Here we begin to glimpse a more mature take on love, as Carly ditches the crush for something more complex and nuanced, a mix of frustration and heart break. E•mo•tionally this track is intriguing, but the high tempo production of cymbal, sax, and bass drum behind the lyrics feels off.

Described as the “heart of the album” by Jepsen herself, the percussion shines as the hi-hat takes the lead. Followed by what we can only assume is the sound of Tinker Bell sprinkling fairy dust, this track is an example of the disco influences flowing throughout this album.

“It embodies maybe one of my absolute favorite musical approaches: something slow, but vivid in its production and imagery,” I wrote for Mother Jones when the song first dropped. It still stands strong among the collection of new tracks.

As the Deputy Digital Editor of Mother Jones James West observed, “There’s some serious musical science in that hook—made in an advanced laboratory where the rats all went pop crazy.” In other words, it’s infectious, repetitive, and it’ll be stuck in your head long after your first listen.

Uncontrollably danceable, this song strings some dark feelings into a tone full of glee. Similarly to “Cut to the Feeling,” there’s an internal energy that’s fully realized upon the chorus. And while “Cut to the Feeling’s” energy is explosively joyful, “Happy” is explosively frustrating. By employing similar musical techniques, Jepsen infects us with how similar passionately felt emotions all are, whether positive or negative.

This track’s groovy with a mature sensuality to it. Just listen.

This track hits like Grimes’ “Oblivion.” It’s subtle and relies on an extremely slow build. You don’t realize how far you’ve been pulled into the song until it ends, and you’re left wanting to do it all over again.

The way this track completely engulfs you in joy is what pop music was made to do.

The ease of the high registers in Guest’s vocals are a perfect match for Carly’s deeper tones. Their pairing becomes kind of organic, as if they’ve long been part of the same band. The two of them strike a nice balance over an infectious saxophone.

Not giving it all away at once, this track is all about anticipation. As Carly inches closer to the chorus the song picks up, in a culmination that will hold its own on the dance floor.

A bit unexpected in its use of silence—there are a few points where the production underneath cuts out entirely—the bouncy delivery of the lyrics feel like spring sunshine on your face.

The Antonoff-produced track is incredibly sexy, oddly innocent, and feels like it’s been plucked off a John Hughes movie soundtrack. A mixture of spontaneity and calculated music breaks, this track has the energy of a satisfying resolution.

If you listen to only one track from Dedicated, let it be this one. This song captures the essence of Jepsen’s vulnerability and insecurity, while defiantly packaging it in an infectious beat. There’s a level of confidence, a mastery of emotion, and yes, maturity that we haven’t been privy to before in her work, but it seems as if it’s here to stay.

One of the more beautiful parts of Dedicated is that it’s E•MO•TION—just slightly off kilter. It doesn’t stray too far from the signature crush-y/synth pop that’s become synonymous with Jepsen, but strays far enough for a fresh feel. The album comes off as a work that’s of an artist solidified of their place in the world, certain and mature. Dedicated, with its Cyndi Lauper like fun and Donna Summer-esque beats, ushers Jepsen into a different type of star status. A status that endures generations of music lovers.