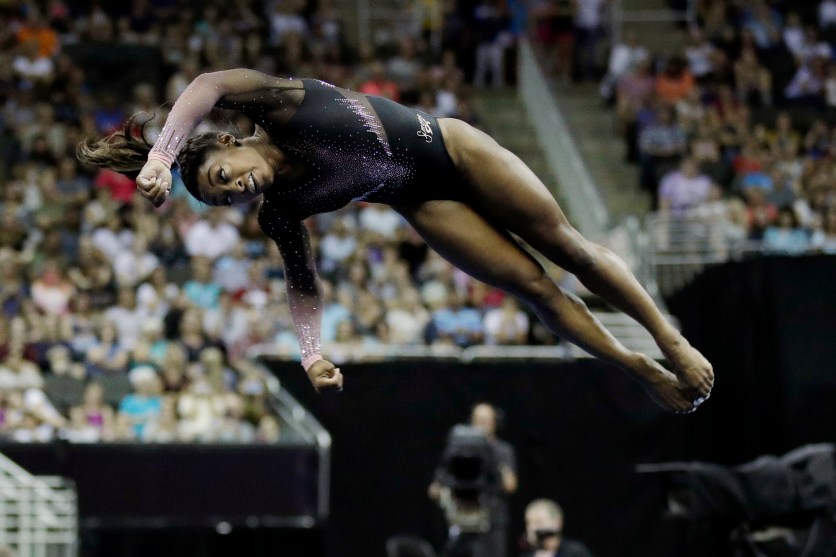 Simone Biles competes in the floor exercise at the 2019 US Gymnastics Championships.Charlie Riedel/AP

She had taken time off. She finished fourth on Dancing With the Stars. Her coach since age 7 had moved on—because Olympic gymnast Simone Biles herself had said, three years ago, that she would do something else.

“I really did in that moment feel like I was going to be done, but there was a slight chance that I would want to come back. Everyone’s like, oh, you’re going to come back, and I feel like I fought it more,” a triumphant Biles told NBC Sports after taking her sixth US all-around title last weekend.

No woman had done either before. If she does both at October’s World Championships, the moves will be named after her.

Viewers worldwide were in awe. “We are so lucky to share a planet with her—even if she has a unique ability to escape this planet’s gravity,” wrote Siva Vaidhyanathan, director of the Center for Media and Citizenship at the University of Virginia.

Biles, who returned to training in November 2017, has fewer people, if anyone, to prove herself to in training for the next Olympics. “I’m just doing it for myself, and I think that’s the beauty of it,” she said Sunday.

Readers, who is the most inspiring athlete you’ve ever seen and why? Simone Biles? Serena Williams? Roberto Clemente? Someone else? Let me know at recharge@motherjones.com.

Lost and found. After he retired, and lost his wife, music-lover Roger Goldin began volunteering at a place he adored, the Tanglewood summertime center for the Boston Symphony Orchestra in the Berkshires. He was on the case when Barbara Roney presented a challenge for the center’s lost-and-found department. He listened carefully. The diamond setting to a ring that Roney’s husband had given her had fallen off, and she presumed it was when she was applauding at a concert in July. Goldin, a forensic psychologist, searched around her seat for the microscopic diamond, by iPhone flashlight, poking through the dirt and around the metal legs of the seats. He searched again. “All of a sudden my light caught a sparkle, like a glint,” Goldin recalled. Roney, a psychoanalyst, was jubilant, adding that the most significant aspect of the experience “was just the kindness of one person listening to another person.” Goldin said it wasn’t just about “finding a person’s diamond, it’s dealing with loss. This resonated with me; there was an overtone to this story, just like in music.” (The Berkshire Eagle)

After yard-shaming, neighbors pitch in. The anonymous note came in while Randa Ragland was dealing with the stage 4 cancer of her 3-year-old son, Jaxen. Handwritten, the letter scolded her for not keeping up the exterior of her Pinson, Alabama, home. Ragland posted the note on Facebook—“I just didn’t have the energy to be negative,” she told CBS 42—and then people flocked to her home to help. “Look at this! This is love,” said Joey Harding, who pitched in. Harding, who lost his daughter to the very same cancer that Jaxen has, added, “This is love for a stranger.” Ragland was floored by the work of the volunteers, who called themselves “Jaxen’s Army for Justice.” “I don’t have a large family. My mom is gone, my dad is gone, my brother is gone,” Ragland said, “so this means a lot.” (The Root)

The latest crop. With California fields drying up, farmers are planting solar panels on their land. A new report says California may need thousands of square miles of solar power production—and ideally, up to half of that land would come from farms and ranches. At least 13,000 acres of solar farms have already been built in the agricultural San Joaquin Valley, and proponents say there is plenty of fallow or environmentally disturbed land to expand. The company behind Pom Wonderful and Fiji Water, building a 157-acre solar farm, said it may make as much from solar in 30 years as from almonds or pistachios today. “In one case we’re growing an agricultural product that has value, and in another case we’re producing electrons that have value,” said Steven Swartz, vice president of strategy for the Wonderful Co. (Los Angeles Times)

Evening it up. Jessica Wade is on a mission: Add profiles of remarkable women and underrepresented scientists to Wikipedia. The British physicist, troubled that only 20 percent of Wikipedia biographies were of women, has added 670 profiles so far. She also has led editathons at high schools and science conferences. Among her profiles: DNA pioneer June Lindsey and mathematician Gladys West. “If you put content on [Wikipedia], people don’t only read it, it changes their perception about who they think does science and what they think science is,” said Wade, who hopes it inspires young women and people from diverse groups in science. “Our science can only benefit the whole of society if it’s done by the whole of society. And that’s not currently the case.” Thanks to reader Stacey L. Kratz for alerting me to the story. (New York Times)

I’ll leave you with the swirling sandstone of “The Wave” at Arizona’s Vermilion Cliffs National Monument, via the Interior Department’s Twitter account. Thank you for reading, and have a great week ahead!

The cross-bedded and swirling sandstone of “The Wave” at Vermillion Cliffs National Monument is a photographer’s dream come true #Arizona pic.twitter.com/NbESkjRtKB