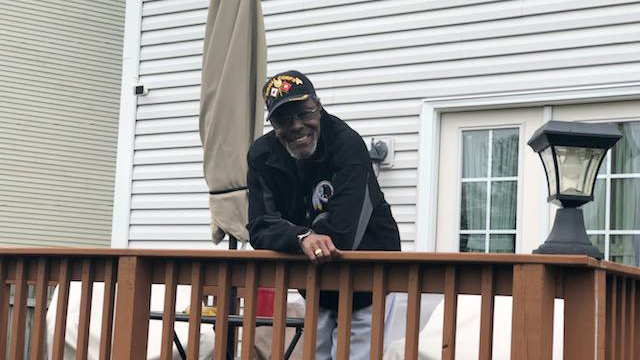 Jimmy Dorsey, a DC travel agent, helped a stranger in need, changing the traveler's life and altering the course of science history.Courtesy Jimmy Dorsey family via the Washington Post

Help me, the man pleaded with the travel agent. My country, Kuwait, has just been invaded, and I need to change an airplane ticket for job interviews.

The travel agent, risking his own job if he were to help, took the leap and made magic happen for the traveler by changing the ticket—and also opened his own wallet to give that stranger $80, a gesture of selfless support.

In the nearly 30 years since that fleeting moment, that traveler—scientist Mahmoud Ghannoum—got the job, settled into the United States, and has become the world’s leading microbiome (gut bacteria, probiotics) researcher.

But he never got to thank the travel agent who’d showed self-sacrificing kindness and helped make the rest of Ghannoum’s life happen. After a search online, Ghannoum found Elaine Dorsey, who remembered her husband, Jimmy, telling her about that day at the travel agency, the man who needed help, the cash Jimmy gave him. “It wasn’t out of the norm for him to do something like this,” Elaine Dorsey told the Washington Post’s Paula Dvorak.

Jimmy Dorsey, a Vietnam vet, volunteer firefighter, and youth football coach, died in February at 69 after a decade-long struggle with liver and lung cancer. But the Dorseys and the Ghannoums are making plans to meet to honor Jimmy’s memory.

Elaine Dorsey hopes that the sudden surfacing of her husband’s act of kindness will inspire people to follow Jimmy’s lead.

Don’t call me hero. Mike Stapleton said he was just doing his job, driving his cab in the wee hours, when he saw a car crushed under an overpass, smoke billowing from its hood. Inside were two unconscious men, and two women screaming, all teenagers. He stopped. One by one, he pulled them to safety as a fire grew under the dashboard. Then the car exploded. On October 7, Stapleton won the Royal Canadian Humane Association Canada Bravery Award for the rescue in St. John’s, Newfoundland. “I think they’re making too much of it,” Stapleton said. “Listen, you’re a human being, you got to do it. You see smoke, you’ve got to remove them.” (CBC)

“The People’s Farmer.” Gail Taylor had a promising public policy career. These days, she heads weekly toward Capitol Hill—not to lobby, but to distribute food for her neighbors. On a farm 3 and a half miles from the White House, Taylor grows dark green cucumbers, hardneck garlic, orange and purple carrots, red gooseberries, yellow plums, and heirloom tomatoes. Nearly 200 people support and share in the bounty of her Three Part Harmony farm. Taylor began weeding and transporting as an avocation on a community farm, and it became a calling. “I loved it. I was like, ‘Oh my gosh, I never have to turn on a computer again.’” DC lawmaker David Grosso said she has inspired efforts to reclaim urban land for agriculture and help people follow her path. “She’s definitely the people’s farmer,” added Marla Karina Larrave, a food justice advocate and member of Taylor’s community agriculture program. “In terms of farming, you’re talking to the most awesome person in DC.” (Civil Eats)

Vet’s best friend. Nick Leist served two tours in Iraq and has PTSD and limited mobility to show for it. One night, as he was starting to have a night terror, he felt the nose of Tess, his German shepherd, on his face. She knew, he said; she’s helped him many times during the year he’s had a service dog. A bipartisan bill in Congress would allow vets to access service dogs as part of work-therapy programs—and give some vets the opportunity to adopt the dogs. Research has shown service dogs can help mental health, improve interpersonal relationships, and lower substance abuse risk, said one sponsor, Rep. Elissa Slotkin of Michigan. The bill is “a good start,” said Leist. “It’s something to get it out there to bring it more light and [show] how they help people.” Thanks to Samantha Power for the story tip. (Livingston Daily)

We asked, you answered. After our story last week on Chicago’s public library eliminating late fees, readers from Baltimore; St. Paul, Minnesota; and Florida’s Sarasota County emailed that their libraries are among those doing the same. Meredith Bird Miller, who worked in Vermont and New Hampshire libraries, wrote that two of her libraries did away with fines and fees—and brought in more money than they had before, through a “conscience box.” “Give it a try for six months!” she recommends. “See what happens!”

I’ll leave you with this soothing view from Zion National Park in Utah (my favorite national park) via the Interior Department’s Twitter feed. Thanks so much for being part of this week’s Recharge, and have a great week ahead!

The Virgin River flows by the Watchman @ZionNPS & washes away all your stress. Pic by Matt Meisenheimer (https://t.co/7u0uZGuWtK) #Utah #FindYourPark pic.twitter.com/4PeECgXeCJ